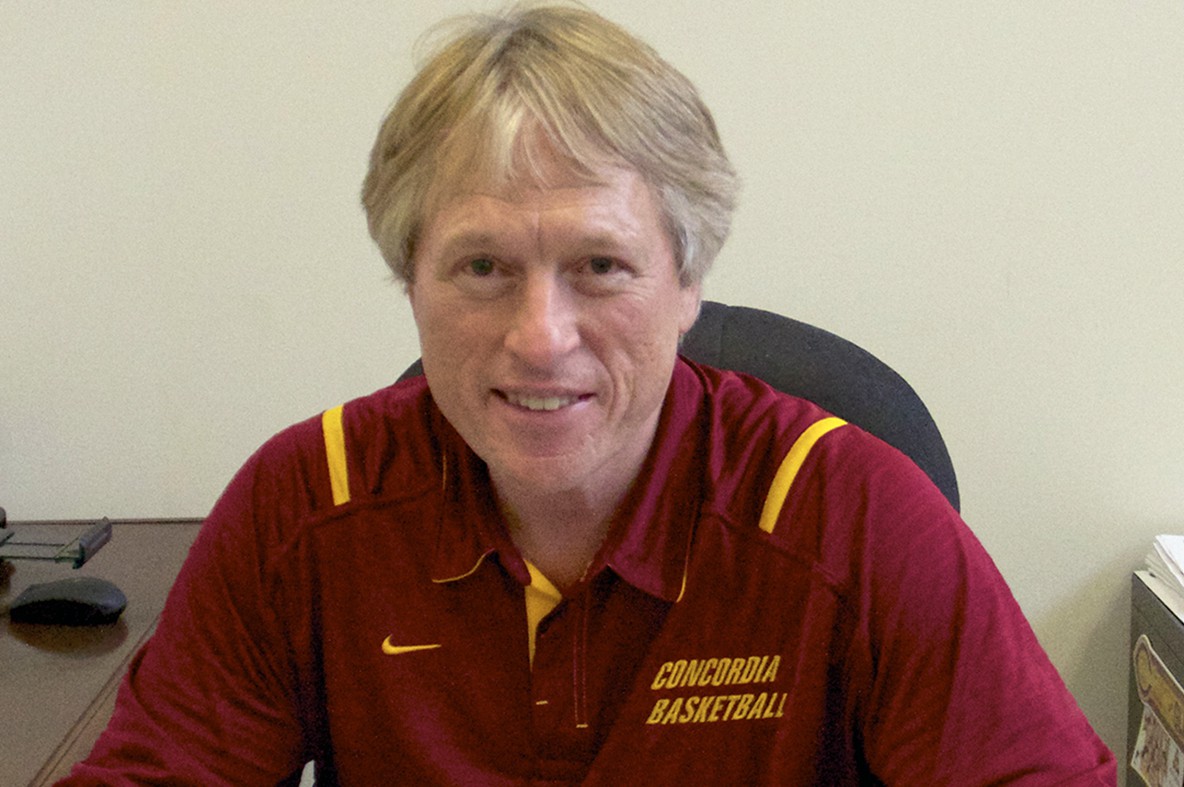 With his first year as athletic director nearly behind him, Rich Glas and the rest of the Athletic Department are reflecting on how Glas’ strategic vision for the department has changed Concordia’s sports atmosphere.

Glas said his vision was to improve Cobber athletics overall and increase Concordia’s MIAC All-Sports Trophy score, which averages and combines women and men’s sports statistics for each school in the MIAC and then ranks the schools based on their scores.  He also wanted to foster a sense of community in the athletic department.

To accomplish these goals, Glas came up with “Cob Mob,” a marketing strategy to increase student participation at games.

“The marketing department has really took my idea of Cob Mob and ran with it,” Glas said. “I think the student population involvement will only grow next year, and I think the support from our Athletic Department family was what really started it.”

In addition to his desire to expand campus-wide support for athletics, Glas has done a lot of work to improve the inner connections of the Athletic Department as a whole, said Rachel Bergeson, associate athletic director.

Bergeson said the first thing Glas did this fall was to hold the first ever all-sports meeting to which all athletes were invited. The event was held in Memorial, and President William Craft came to initiate it.  There, Glas relayed his vision for the department and played highlights from Concordia’s athletic history.  Glas said he wanted each sport to feel represented and know they are valued as part of the Athletic Department family.

“More than any other year that I have been here, we have seen more athletic support because of Glas’s vision,” Bergeson said. “We would see our whole men’s hockey team after practice come over and support our wrestling match or women’s basketball game.  I give credit to every single team who heard the vision and also to our coaches who helped spread that vision throughout the whole year, never letting it die.”

Kristen Hetland, who heads the academic side of the Athletic Department, said that Glas has really brought a sense of renewed energy to the department this year.  She said he has taken on a lot of work that is not required to make the department run and function smoother.

“Glas’s vision has really improved the cohesiveness of everyone in the department because he had a goal of transparent leadership to get everyone on the same page,” Hetland said. “He is hilarious and he constantly stops in your office to compliment or give you feedback.  You always see him, which really builds rapport with everyone.”

Bergeson said that Glas built cohesiveness among the coaches and faculty by holding at least one department meeting each month to improve communication.  She also said that when she looked back on what they have been able to accomplish as a department, there was progress because everyone was well informed on working toward the same goal, such as successfully improving the all sports trophy results and ranking higher in MIAC average scores.

Football defensive coach Kyle Bakken said Glas always makes the coaches feel appreciated and encouraged.  He said Glas doesn’t just preach to them about what to do, but he walks the walk too.

“I have always had a lot of respect for Glas with how he is able to motivate others,” Bakken said, “and not just because of his previous years of coaching experience or because he wears that snazzy sweater vest of athletic director, but because he is able to turn evaluation and reflection back on himself as well. Which is kind of ironic because of his name.”

Another thing Bakken said that Glas did differently this year was provide time for the coaching staff to assess both he and Bergeson’s performance and give them feedback.

“One of the big shifts in management awareness that went on when Glas took the athletic position department was his new idea about evaluations,” Bergeson said. “He wants to be evaluated himself and he thinks that this is really big component in improving.  It also fits in so well with the whole college’s theme of becoming responsibly engaged in the world by reflecting.”

“He does a great job of making sure everyone has a role on the athletic department team, even if it’s not playing time, and that’s a delicate balance to figure out,” Hetland said.