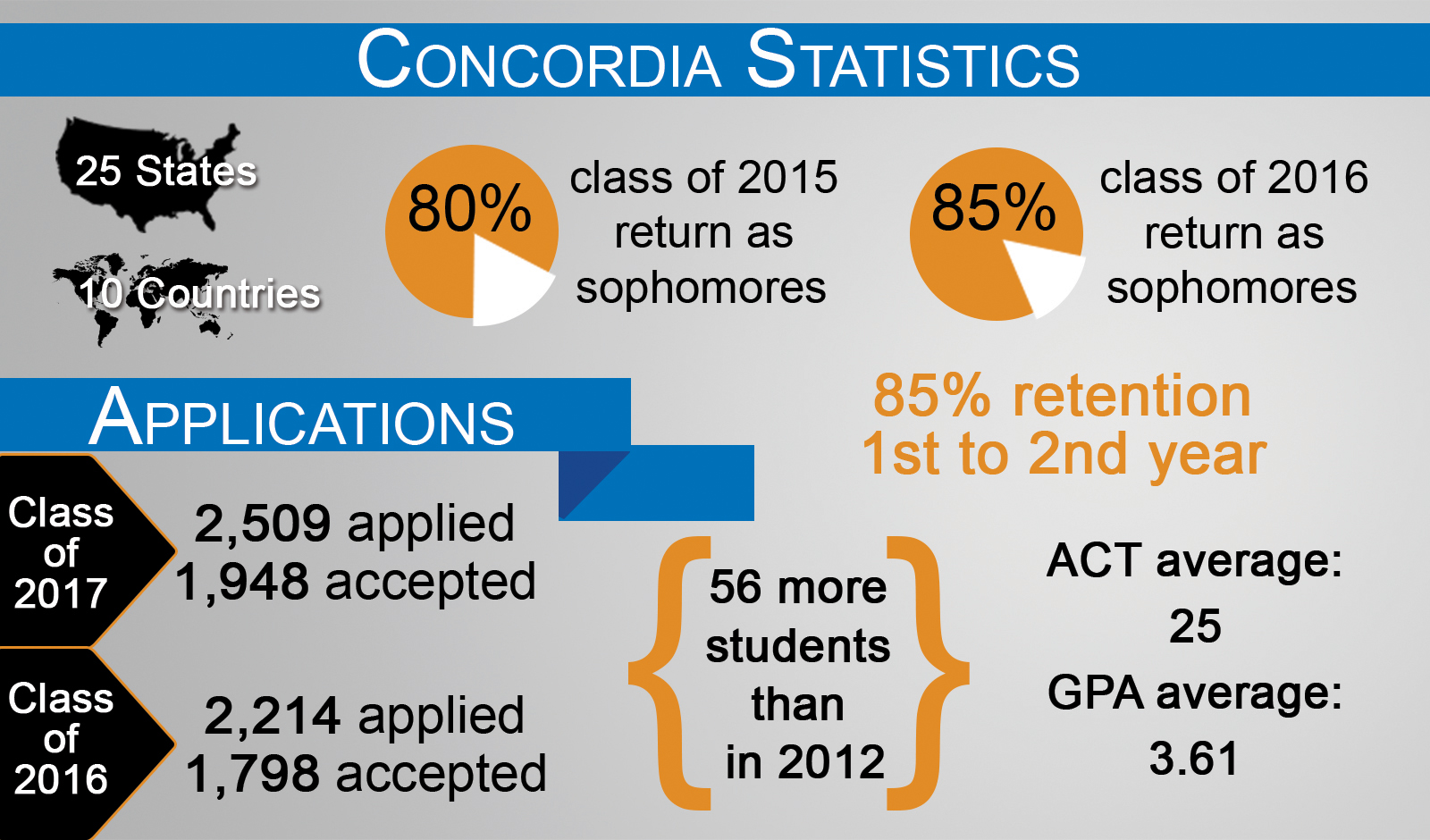 Incoming freshman class sizes have been surprisingly unpredictable in recent years. This inconsistency has provoked curiosity around campus, with the concern being that low tuition numbers will have negative repercussions on the college as a whole.

Over the last few years, class numbers have fluctuated significantly. Concordia’s class of 2015 brought in high numbers, coming out at 726 incoming freshmen. Just the year after, however, there was a significant reduction in the incoming freshman class size, dropping to 633 students. Now the class of 2017 has grown again with 676 freshmen.

Despite the changes in class size, average GPA and ACT scores of freshmen have remained steady over the last several years, with Concordia’s GPA average sitting at 3.61 and a 25 average for composite ACT score.

Concordia, as well as the rest of the nation, is dealing with a shift in college enrollment.

The main factors effecting Concordia’s class sizes are the economy, change in population and increased levels of competition from other schools, according to Steve Schuetz, vice president for enrollment.

Schuetz stated that we are currently at the bottom of a demographic shift. The class of 2014 had a low number of high school graduates all over the Midwest, particularly in Minnesota and Montana: two of Concordia’s main targets for admissions.

This drop of high school graduates differs from some areas of the country, such as the growth currently occurring in the South and the West.

“The challenge is that the population is migrating. We have farther to go to recruit students to come to Concordia,” Schuetz said. “It’s one of those natural things. We have an increased level of competition with other colleges and universities.”

Scott Ellingson, the dean of admissions, agrees that the decline of incoming students has a lot to do with the change in population.

“High school numbers are going down, particularly where areas that Concordia has a lot of students migrate from, such as Minnesota and Montana,” Ellingson said.

Concordia’s main source of students is the Twin Cities. However, it has become more difficult to recruit students to drive the four hours to tour Concordia.

“Many other schools in the Midwest are experiencing similar problems, such as St. Thomas and St. Olaf,” Ellingson said.

The economy has also had an effect on the decrease in class size, according to Ellingson, as students are less likely to go to four-year schools like Concordia because of financial concerns.

The average cost of a private, not-for-profit college is $36,300 a year, according to a 2011 report by the National Center for Education Statistics. Concordia lists their yearly comprehensive fee as $39,974 on their website.

However, he said that Concordia has tried to ease those worries.

More than 95 percent of Concordia students have received assistance in financial aid in the past five years. There has also been a 10 percent increase in the application pool, which has prompted Concordia to offer more scholarships. Concordia’s website states that the average financial aid award is about $25,000 per student.

Even with financial aid, tuition numbers can be daunting.

“There is no question that expenses have gone up faster than scholarship money,” Ellingson said.

These scholarships are offered based on family financial situations and looking at the strengths of each individual student.

According to Jasi O’Connor, director of Residence Life, both women’s floors could have been closed last year as well because there were enough vacancies.

“We still had plenty of space to accommodate all of the women on campus. We also want to promote a community environment in the dorms, and having all that extra space creates a different feel,” O’Connor said.

By closing down two floors, Concordia saves more than $8,600 in staff, water and electricity.

“We are gaining certain efficiencies by shutting some things down and making use of the space we have,” Schuetz said.