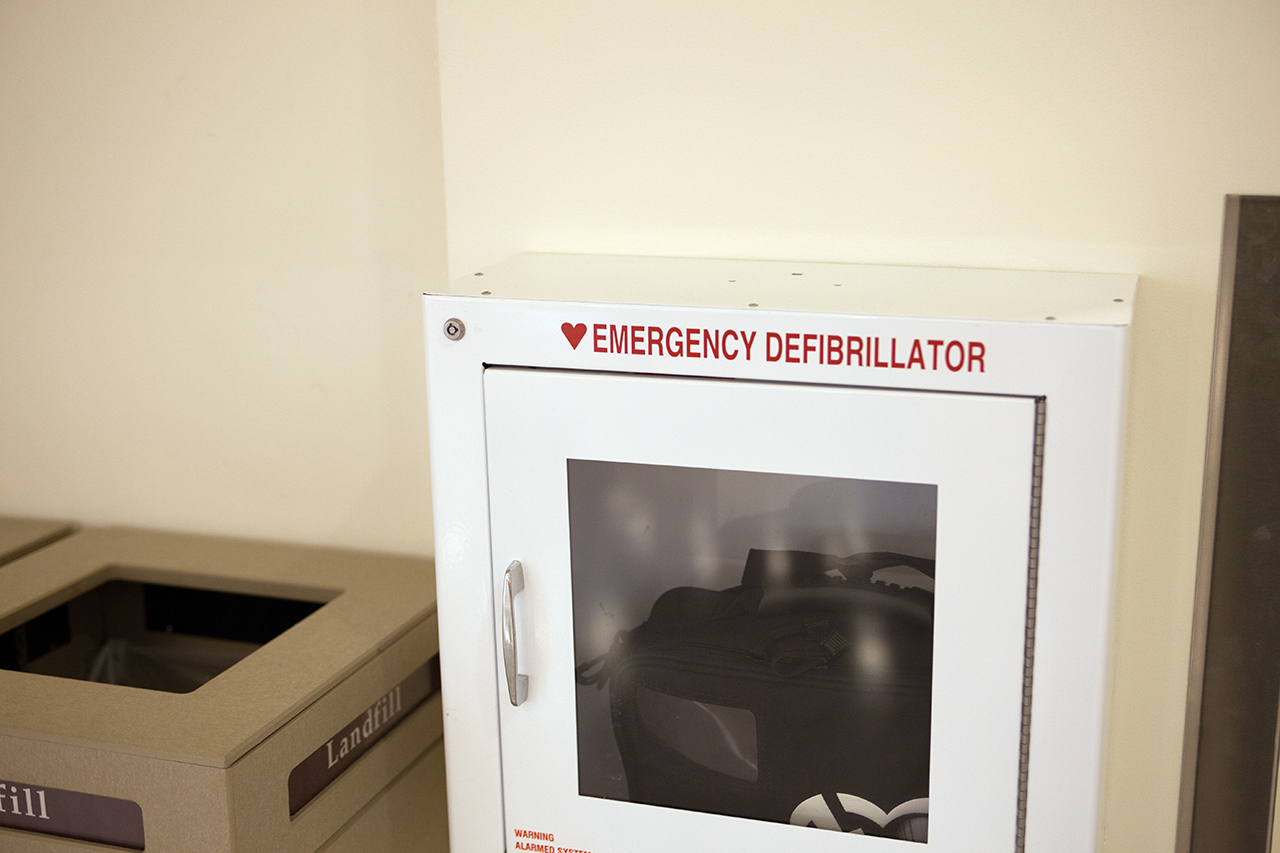 Carol cheered on the Cobbers at the home game against St. Olaf on Sept. 21 with Kathy Benson, Concordia’s Health Center Director, and their friends.

“We were high fiving and singing the (school) song and carrying on,” Benson said.

When the game ended, Carol said she was feeling dizzy and faint, so Benson, a certified nurse practitioner, addressed her consciousness using standard procedure.

Benson said Carol was responsive and lucid but soon could not remember where her car was parked and did not recognize her own purse.

By the time they reached her car, Carol’s health had declined considerably.  Suddenly, she crumpled to the pavement.

Despite their tireless efforts, emergency responders were unable to revive her.

“They used the AED on her to no avail,” Benson said.

There are some emergencies that will end badly no matter how prepared the college is, she said.

In spite of this, Concordia tries to prepare itself for emergencies by using preventative measures like automated external defibrillators, or AEDs, emergency call stations, commonly referred to as “blue lights,” and the e2campus alert system.

While emergency preparedness is a high priority at Concordia, money is an obstacle to fully equipping the campus.

Director of Risk Management Roger Olson said the school has to use its resources carefully when installing proactive measures to prepare for emergencies.

“When minimizing risk, you have to make the decision of how prepared to be,” he said.  “You err on the side of going the extra mile.”

Director of Public Safety Bill MacDonald said that an AED costs roughly $2,000.  This spendy price tag makes installing them all over campus financially improbable, but Olson said he wants to see more on Concordia’s campus.

“Ideally, you’d like to see one in every building,” Olson said, “so you try to place them strategically.”

Benson said having more AEDs on campus might not prevent every emergency from turning out badly.  Benson experienced this firsthand with the loss of her friend, Carol.

“Would we feel more safe if we had more AEDs?” she said.  “I don’t know.  The AED is proactive, but it’s not going to assure that it’s all going to be ok.”

Installing blue lights is a second way that Public Safety prepares the campus for emergencies.  Currently, there are four working blue lights on campus that spread around the perimeter of campus.  MacDonald said the most recent blue light was installed on the west side of campus, behind Livedalen Hall.

The blue lights have two buttons, one black and one red.  The black button is for non-emergencies and is usually used to help find buildings or parking lots.  The red button is for emergencies.  If this button is pushed, the blue light will begin to flash, and officers are dispatched immediately.

“We do not wait to find out what is going on,” MacDonald said.  “As soon as the red button is pushed, we dispatch officers and then gather the information while they are en route.”

Every year, Public Safety, Residence Life and Student Government Association walk around Concordia’s campus, scouting areas that should have a blue light installed.  They try to install a new blue light each year.

Eventually, MacDonald said he wants to see a blue light installed in a central location on campus.  When MacDonald came to Concordia in 2008, there was only one blue light, located on 12th Avenue.  Since then, the school has installed three more blue lights around the perimeter of campus.

Other colleges in the area also use the blue light system to respond to emergencies.

NDSU has 27 blue lights installed on the school’s grounds, according to Administrative Coordinator of campus police, Bobby Ruziska.

NDSU’s campus is considerably larger than Concordia’s, but MSUM, which is similar to Concordia in size, has 20 blue lights and 24 AEDs, said Greg Lemke, director of public safety.

If money was not an issue, there would be more blue lights throughout campus and AEDs in every building.  With 42 buildings on Concordia’s campus, however, this may not be realistic.

“I don’t know if that’s possible on any college campus,” MacDonald said.  But certainly the more AEDs we have, the more blue lights we have, the safer we are and the more prepared we are to respond to emergencies.”

In addition to installing AEDs and blue lights on campus, Public Safety uses e2campus to alert students, faculty and parents of campus emergencies.

Olson said that 1214 students and faculty at Concordia have signed up to receive e2campus alerts.

Public Safety and Risk Management hope that information regarding emergencies will spread quickly by word of mouth, because e2campus cannot reach everyone at Concordia.

“You go into it with your eyes wide open understanding that you are never going to get 100 percent,” Olson said.  “You hope to have enough saturation that (information) spreads quickly.”

Students, faculty members and parents can register up to two telephone numbers and up to two off-campus email addresses to receive alert messages.

If the emergency poses immediate danger, such as an armed person on campus, Concordia’s blue lights system has the ability to act as a public address system.  MacDonald said Public Safety can call out and talk to people in close proximity to the blue lights, alerting them of the danger and giving them instructions.

MacDonald agreed with Olson’s idea that news of an emergency will travel quickly through people on campus by word of mouth.

But he said there is not a way to prepare the college completely for every emergency.

“I don’t think there’s any system that’s going to give 100 percent coverage at all times,” he said.

Because of this, he said people should educate themselves on Concordia’s emergency response plan and also that it is important to stage hypothetical emergencies, to run drills for anything ranging from lockdown to responding to chemical spills.

The plan also includes a clear chain of command and a section devoted to procedures in response to specific situations, such as a hostile person on campus or weather-related emergencies.

In 2009, the NIMS model was put into action twice because of H1N1 in the fall and the spring flood.

Olson said that during that year, Risk Management was holding daily meetings to gather updates from every department on campus.  In both situations, Concordia’s emergency response model was put into practice.