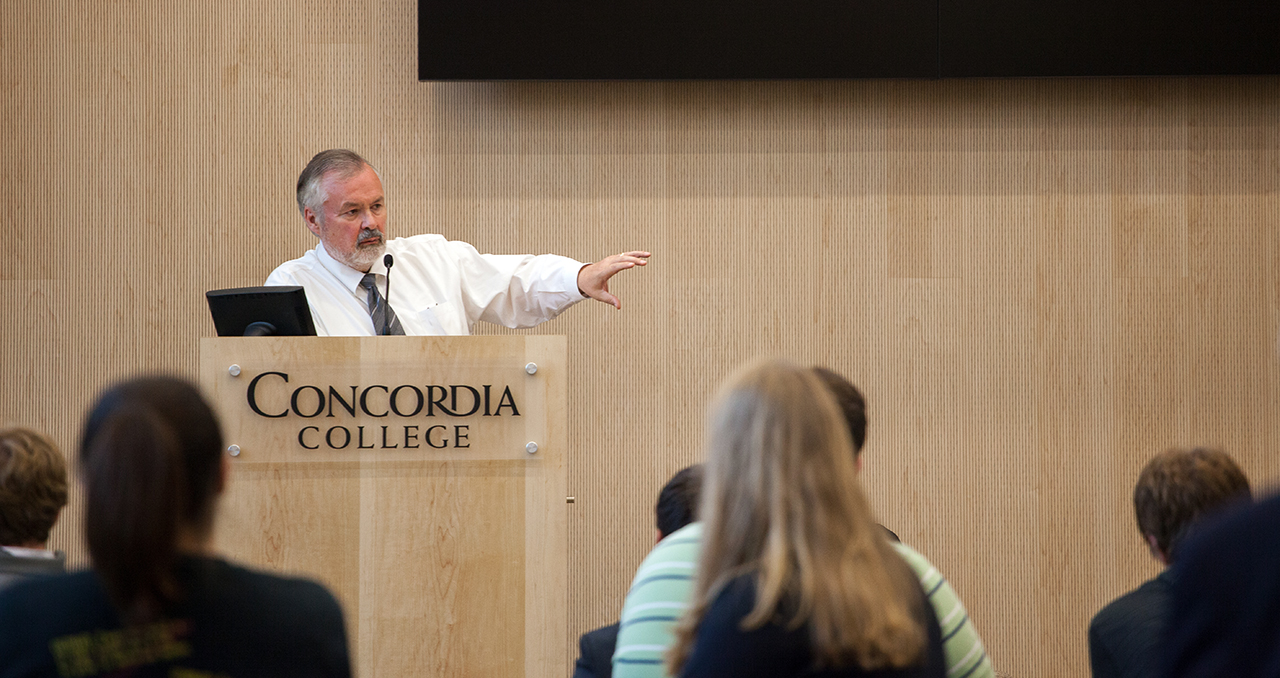 As a third grader, George Halvorson sat in his elementary school library crying because he had finished all the books on the shelves.

Halvorson, a Concordia 1968 alumnus that graduated after just three years, was the CEO of the largest healthcare corporation in the United States. He returned last week to receive the 2013 Alumni Achievement Award.

During his return visit, Halvorson got the chance Thursday to sit with current students to discuss the importance of public service and writing. Halvorson, past CEO of Kaiser Permanente and current board chairman, has written several books regarding American healthcare and served as an advisor in the creation of Obamacare.

“He has truly embodied influencing the affairs of the world,” said George Connell, chair of the humanities department at Concordia.

Halvorson’s curiosity for the world around him began at a very young age, when he was an avid reader. He began writing poetry at age 14 and has continued writing to this day.

Halvorson studied political science, writing and history at Concordia. In addition to attending classes his final year, he also wrote for The Forum. He said his editor became one of his heroes, teaching him to be ethical and encouraging — two things he has translated from his writing to his business. He was challenged to always be better, and he has shared that mindset with his colleagues ever since.

From an intern at the Wall Street Journal, to public relations and now healthcare administration, Halvorson has been able to use his liberal arts education in each of his careers. He said it gave him a broader perspective and made him more creative and a better problem solver.

One of the most valuable lessons Halvorson learned at Concordia was to be honest and clear. Professors challenged him to be more real and honest than he thought possible, calling him out when they believed he was trying too hard or not hard enough.

As a professional in the business field, Halvorson holds his employees to a similarly high standard. He writes a weekly letter to his employees to let them know how they are doing and has every fact checked. Honesty is the best policy, as the saying goes, and Halvorson has a no-toleration policy for lying.

As an author of healthcare literature, Halvorson writes to inform the public by backing up his beliefs with numbers. He shared with Concordia students that you have to stick to what you believe to be true; if you do this, there is no need to remember what you are telling people. If you can articulate the foundation of your core beliefs, he said, it is possible to share those with others to help them understand where you come from.

He will be retiring from his post at Kaiser Permanente in the coming months and is planning on focusing more attention to writing on other societal issues, such as early childhood education.

Halvorson is currently the chair of the First 5 California Children and Families Commission, which focuses on the first five years of life. The best predictor of future imprisonment, Halvorson said, is the number of words per minute a child can read. This commission will focus on how to improve the lives of children within the first five years of life.

This shift in writing focus comes from Halvorson’s desire to write about whatever is his current life mission.

The energy that drives his interest in such a variety of topics did not go unnoticed by the humanities students last Thursday, as they engaged in his answers to their questions. Halvorson conveyed his passion for what he does through the stories he shared about the experiences and opportunities he has had over the course of his career.

His words continued to resonate within both the room and lingering students, even after Halvorson departed.

“The kid who read every book in the library is alive in the man,” Dean Eric Eliason said.