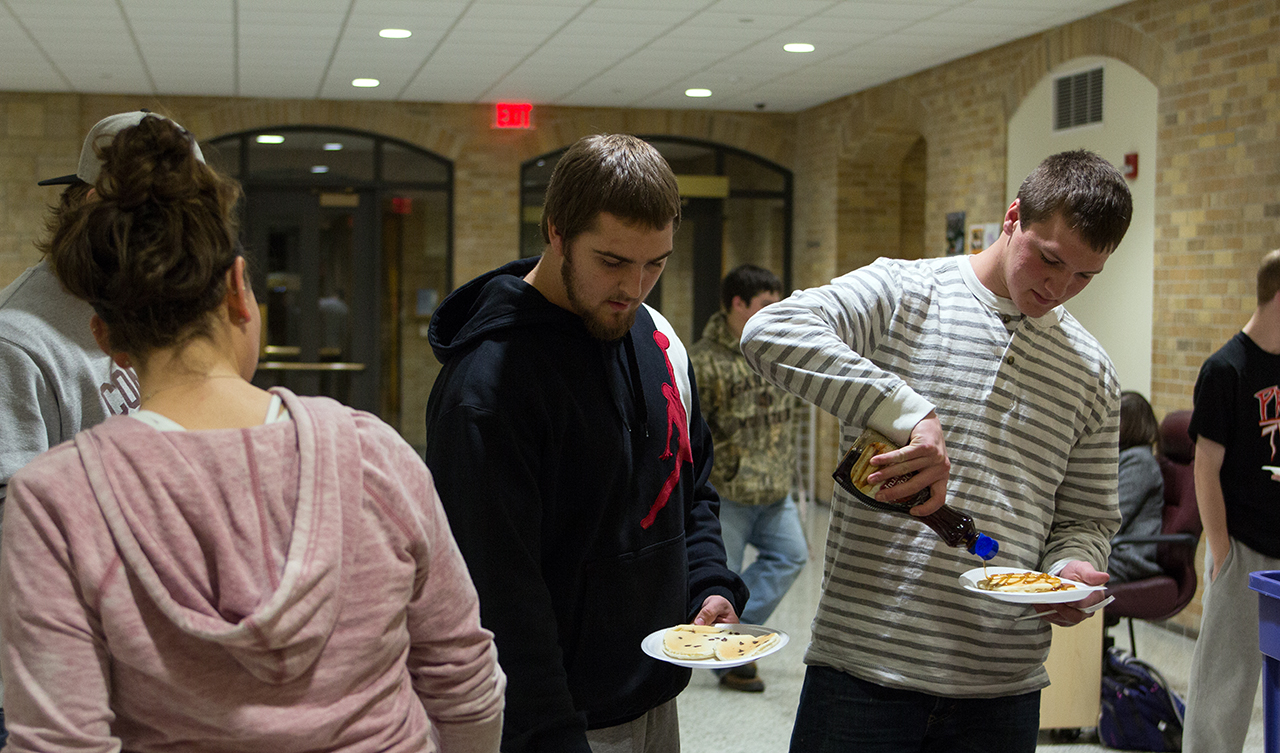 Concordia students got involved in Fill the Dome for the second time by raising more than $500 and donating about 300 canned food items.

Fill the Dome is an annual food drive led by Fargo-Moorhead high school students to raise money and food donations for the Great Plains Food Bank.

“I love food drives because (hunger) is such a problem in our community,” Dymoke said. “Knowing that someone down the street might not have enough money for breakfast, lunch or dinner really hits home.”
Kate Astrup, a senior from Fargo North High School, served on the Fill the Dome board this year as a representative from her school. She said Fill the Dome aims to reach 500,000 meals by the end of the food drive that can be donated to the Great Plains Food Bank.

Because of efforts being made at high schools and colleges in the area, Astrup believes this goal is attainable.

She added that it is easy for people to forget that hunger is still a problem in the community.

“We don’t always realize how many people are hungry,” she said.

Dymoke led Concordia in its involvement in the food drive by hosting a pancake feed Tuesday Nov. 12 and holding a “Win a Date” contest throughout the week. There were also collection stations placed in each dorm and in the Atrium, where students could drop off nonperishable foods.
Last Tuesday, there were three pancake feeds in different dorms on campus. Students were able to stop by starting at 9 p.m. to have a pancake and make a donation to Fill the Dome. They went through 25 boxes of pancake mix, 20 bags of chocolate chips and 10 bottles of maple syrup, Dymoke said.

In addition to the pancake feeds, Concordia students entered themselves in a drawing for 50 cents to win a date with one of ten volunteers.
Dymoke said the date volunteers, who were fellow Concordia students, were more than happy to offer themselves for the food drive.
“(They) were just really excited to do something for charity,” he said.

“I’m so ecstatic,” Dymoke said. “Compared to last year, I’m over the moon.”

Dymoke added that Concordia faculty have agreed to match the donations students raised throughout the week, which will make Concordia’s impact on the food drive even larger.

Fill the Dome began seven years ago when student council members from F-M area high schools got together and brainstormed the idea to fill the Fargodome with food donations.

Jon Lipp, a student from NDSU and a Fill the Dome advisor, said the monetary donations the drive brings in can provide the budget for a food shelf for an entire year.

“(Fill the Dome) has the potential to make a really big impact,” he said.

Lipp compared the Fill the Dome food drive to sandbagging in the F-M community.

“It’s a chance for everyone in the community to come together to help end the problem of hunger,” he said.

The Fill the Dome food drive will conclude, as it does every year, with a day-long event at the Fargodome Nov. 25. Food donations that area schools have raised in preparation for the event will be transported to the Fargodome to fill the dome, in a very literal sense of the phrase.

“Their goal is to fill every inch of the Fargodome,” Dymoke said.