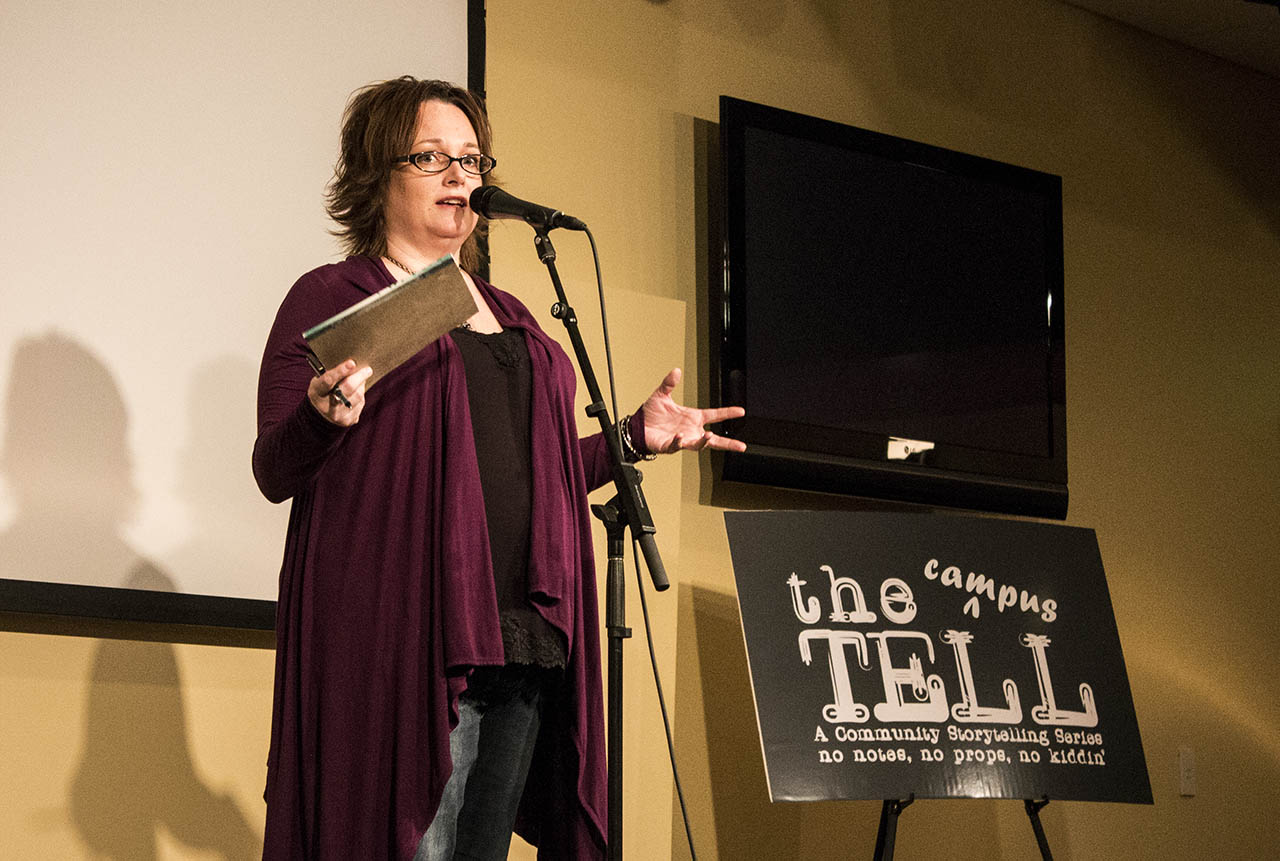 “You guys scare me,” said Laura Egland, founder of the local storytelling scene The Tell, as she took the stage. Egland said she was scared because she did not attend college and did not look as young as she wanted. Students chuckled as she began to introduce the first storyteller of the night.

The first-ever Campus Tell took place on Tuesday night in The Maize. The event allowed Cobbers a venue to tell personal stories in public without preparation.

“A Campus Tell is important,” Egland said. “When I was 20 I thought I was the only one dealing with something. When you drop the bullshit and tell your story, there’s connectivity.”

The Tell is a storytelling society that puts on an event once a month September through April. Any member of the Fargo-Moorhead community can come to Studio 222 on Broadway to hear and tell stories. All stories are improvised. In fact, performances are strictly prohibited, Egland said.

“The point is to give real people a place to tell real stories,” she said

According to Egland, the idea is that you get onstage and tell your story in six minutes or less. You are then given a ranking by judges based on how authentic and entertaining the story was. Every month’s Tell has a theme, and the storytellers get extra points by sticking to the theme, although this is not required.

Concordia Senior Joe Anderson is responsible for bringing the event to campus.

“I’m really passionate about narrative and storytelling,” he said. “I believe in the power of telling stories, and right now there aren’t many places where you can perform unscripted stories.”

Anderson is a frequenter of The Tell in Fargo. He has been attending with his classmate Allison Richards on and off for the past three years, and has told stories twice.

“It was a really good experience to be able to share something,” he said. “Being in front of a large group of people that are there to listen to you makes what you’re saying so much more powerful.”

The organization is run by Egland, with assistance from friends and family.

Egland’s performance career started in the event extemporaneous speaking during speech team in high school. Her background also includes an extensive commercial voice-over career with one of her gigs being the voice of Subway.

Her background in performance allowed the creation of The Tell to be logical progression in her professional life.

On Tuesday night, The Maize was comfortably filled with students who had intentions of completing homework. As soon as the first storyteller walked up to the illuminated stage, the room fell silent and backpacks were closed.

One by one, students walked up to the platform to share stories about the night’s theme: Lesson Learned.

Junior Krysta Hovendon told a humorous story about a ladies night out at a local bar.

“I was peer pressured into doing it,” she said. “I’m on the speech team so I’m used to having scripted speeches. I’m not very good at extemporaneously telling stories.”

Hovendon became gradually comfortable as she told her story, and she credits having Concordia as a home base for the event.

“I’ve seen a lot of these and I always wanted to do it,” Hovendon said about The Tell. “This atmosphere is so much better for me. It’s in front of an audience that I feel safer with, not a bunch of strangers.”

Hovendon was one of ten tellers who were chosen to share their story.

The winner of the event was freshman Faith Mauriala, who opened up about her time spent in an inpatient psychiatric wing due to battling severe depression.

Egland enjoys hearing funny stories at The Tell, but stresses that the more vulnerable ones are usually what the audience connects with.

2014-03-26
Previous Post: Fjelstad’s future: Dorm to be repurposed for coming school year
Next Post: A letter to Fred Phelps