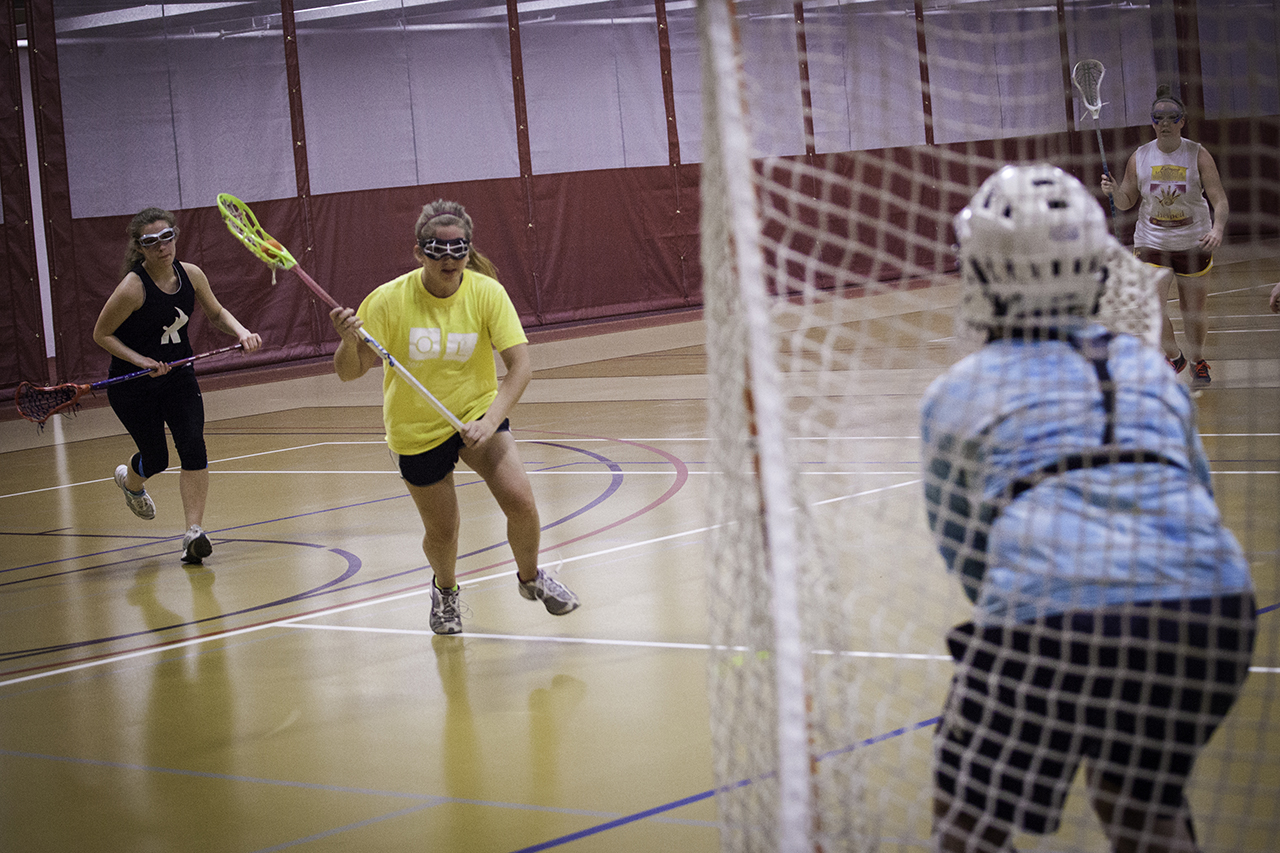 Lacrosse season has officially begun for Concordia College. So far, the women’s lacrosse team has won two of their five games and has traveled across the state for various games.

Last weekend the team traveled to Wisconsin and played against the University of Whitewater. Despite losing 8 to 6 against Whitewater, the team is still in the running to play in the playoffs later this month.

Once junior Mackenzie Lindquist saw the lacrosse booth at the Cobber Expo in the fall of 2012, she jumped at the chance to join the team.

“I played lacrosse in high school and was really excited that they had a club here,” Mackenzie Lindquist said.

“We do a lot of setting up of mini situations of what would happen in a game,” Crook said. “We (also) do a little bit of conditioning.”

According to freshman Kayla Lindquist, the team started practicing last November on Saturdays. Once competition season kicked off, they extended their practice time to weekdays.

Kayla Lindquist feels that the team’s unique team chemistry has enabled the women to be successful this season.

“We know they are going to be there, so it’s easy to make that pass,” Lindquist said.

Unlike the men’s lacrosse team, the women play a non-contact game. Despite this, the women are still required to wear mouth guards and goggles in case the ball hits them.

According to junior Kelly Thurmes, last season, all of the away games were canceled because of snow.

Since this occurred, the team was not able to travel during the whole season. However, there has not been a substantial amount of snow this season, so the team has been able to travel to all of their away games.

Although Olson Forum is open to all students, the women’s lacrosse team has had trouble securing a space to practice. According to Mackenzie Lindquist, the team has gotten asked to leave because varsity sports have come to practice during their practice times.

One of Thurmes’s favorite aspects of the club is the way in which practices enable the team to bond in a unique way.

“(Practices) are usually pretty fun,” Thurmes said. “I like to be active with the team. It’s kind of different than other clubs where you sit around a lot; it’s a different experience.”

Since its start in 2007, the team has gone up in the rankings. According to Mackenzie Lindquist, the team is currently in the same league as Iowa University, Iowa State University and the University of Michigan.

Although the team does not play against some of the other teams in their league, they do play against NDSU, MSUM, St. Mary’s, Hamline, Mankato and the University of Wisconsin-Whitewater.

One of the ways the women keep their spirits up is by doing an after practice cheer. Kayla Lindquist thinks that the cheer enables the team to stay positive despite the outcome of the game.

“Everyone has their downs and ups, so even if it wasn’t their best practice ever we always do get together in a circle (and do) ‘1-2-3, Cobbers,'” she said.

Even though most of the season’s games are away, the team encourages students to come out and watch them. If you are not able to make an away game, this year the playoffs will be on the morning of Cornstock; the location is still being determined but will either be at NDSU or MSUM.

Aside from having a booth at both the fall and spring Cobber Expo, the players also recruit people they encounter in the halls or in Olson Forum.

“(While) practicing last year, people (would) come down and were like ‘can we play?'” Mackenzie Lindquist said. “If we see anyone wearing lacrosse (gear) we are like ‘hey, did you play in high school, you should join our team.'”

Although the school year is almost over, Thurmes highly recommends that students who are interested in joining take look into it.

“Everyone is super welcoming and super willing to teach you new things,” Thurmes said. “I definitely recommend trying it out.”