‘Richest lonely people in the world’ 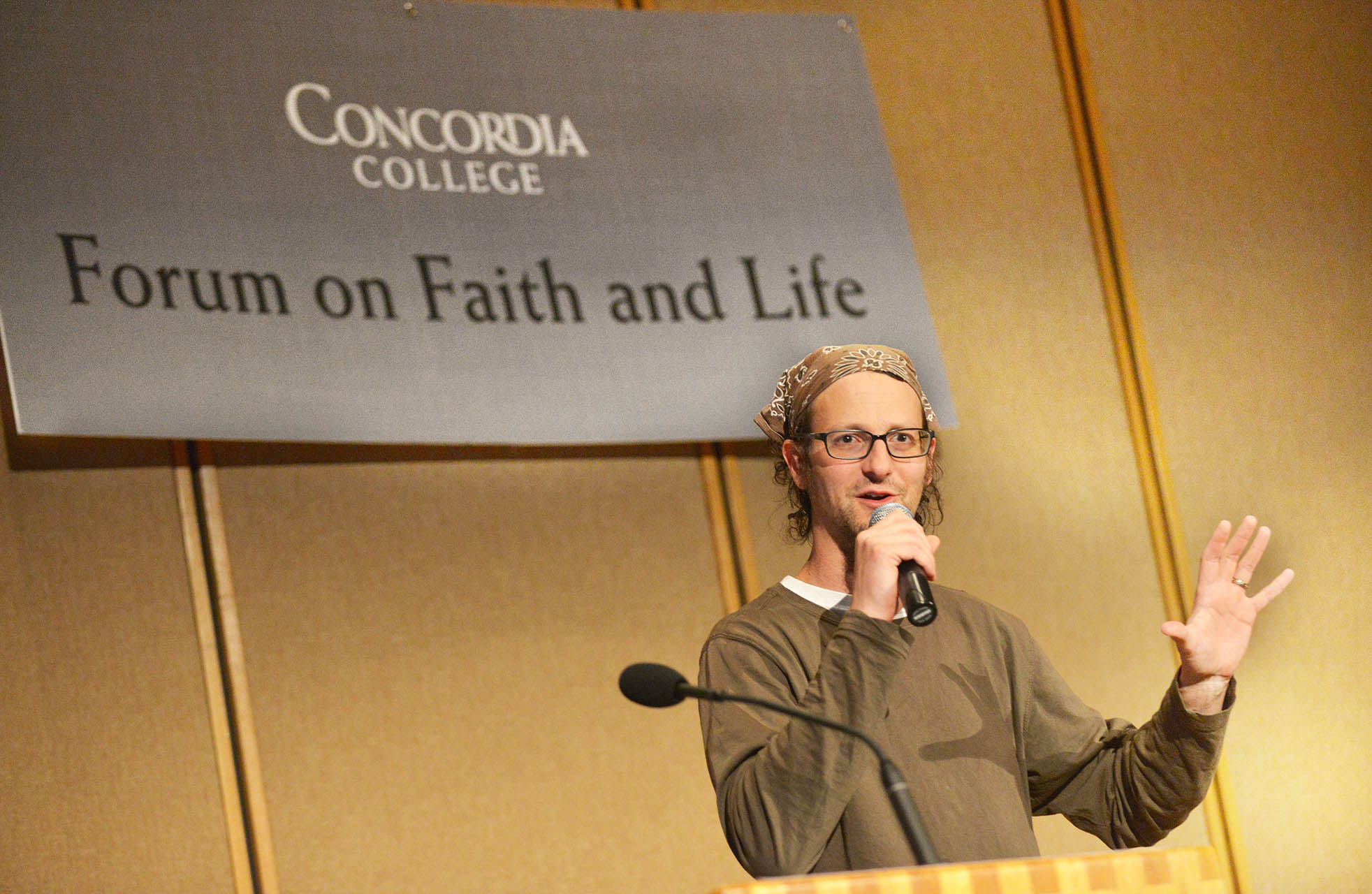 From Philadelphia to Calcutta to Baghdad, Christian peace activist and author Shane Claiborne has been advocating against injustice around the world for nearly 20 years.

Claiborne visited campus last Tuesday for a lecture and discussion, sponsored by Concordia’s Forum on Faith and Life. Claiborne’s lecture was entitled “The Scandal of Grace,” and it aimed both to inspire the audience toward social action and to revise notions of what it means to be a Christian.

Jacqueline Bussie, head of the Forum and Faith and Life, introduced Claiborne with a few words about his past work, which has included advocating for the homeless in Philadelphia, volunteering in hospitals in Iraq, and working with Mother Teresa in Calcutta, India. Bussie noted that Claiborne had flown to Fargo from Haiti the previous day.

Claiborne took the stage wearing earth tones and denim. His jeans had large, kangaroo-like pockets on each leg. His hair was pulled back by a brown bandana, and his Tennessee-bred accent was unaffected by his years living in Philadelphia. He came across as a mildly delinquent son of Bible Belt Christianity, embracing the world’s offerings as fully as he can without losing sight of the central faith he started with.

Much of what Claiborne had to say about religion and activism was couched in stories he drew from his experiences, and he routinely quoted authors he read or people he had met to make his most important points. He interspersed his stories with humorous asides, making large gestures or exaggerating his voice to balance his more serious points.

He spoke about working for the homeless in Philadelphia, where, in the mid-90s, laws had been passed that made it illegal to sleep in parks or serve food in public places. In response, Claiborne and his friends organized a worship service in Philadelphia’s Love Park, at which they served communion.

“After that we kept breaking the bread by bringing in some pizzas,” Claiborne joked.

Though members of the Philadelphia police were reluctant to do anything about Claiborne’s protests, they were eventually ordered to arrest the homeless people and the activists.

When Claiborne and his cohort went to court, the District Attorney in charge suggested a sentence that required hours of mandatory community service.

Claiborne and his fellow activists won in court, and Philadelphia’s discriminatory laws were eventually dismantled.

From there Claiborne transitioned into an anecdote about his time working in hospitals in Iraq during the initial U.S. invasion. He told about an evening in Baghdad following the smart-bombing of a hospital, after which a street worship service was held. The service’s participants sang “Amazing Grace” in Arabic.

Claiborne used this story to emphasize the way the faith he follows has changed over time. To do so, he borrowed a response an Iraqi Christian had to an American’s surprise at the number of Christians in Iraq.

“’You didn’t invent Christianity in North America,’” the Iraqi said, according to Claiborne. “’You just domesticated it.’”

The concept of a “domesticated” Christianity was one of the main focuses of Claiborne’s lecture. He says he desires a return to a belief system that is focused on action, rather than on one that requires people only to claim a set of beliefs.

For this point, too, Claiborne used a quotation, this time from a pastor: “’We know when we’ve really heard the gospel,’” he said. “’Because it comforts the disturbed and disturbs the comfortable.’”

Claiborne’s emphasis on inspiring his audience toward action linked his other major point, which was highlighting the importance of caring for the poor and unfortunate.

Claiborne spoke against the inequality and exclusion he considers common in the United States and around the world, and he urged the audience to live more simply. He noted that there are high rates of depression and suicide among the wealthy, and said that the wealth people strive to gain mostly divides them from one another.

“We’re the richest lonely people in the world,” he said.

The essence of Claiborne’s lecture was a call for the audience to do what they could to help “interrupt the patterns of injustice” in our society.

“Do something that builds a bridge rather than a wall,” he said.

Claiborne lives in Philadelphia, where he leads a faith community called the Simple Way. He is currently working on a book about the death penalty.

2014-04-23
Previous Post: Editorial: Big changes are only the beginning
Next Post: Thoughts on ‘Fargo’ from a Fargo native