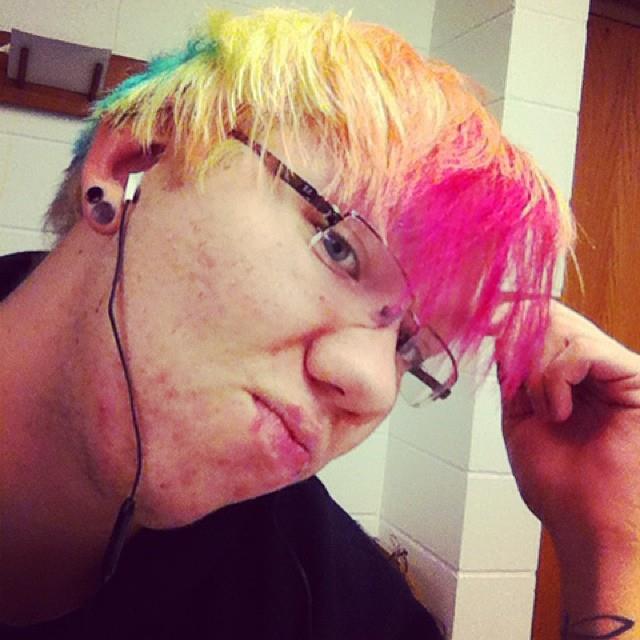 Why they do what they do

Seniors Mel Kurtz and Dalton Schneider are Cobbers that take pride in personal expression, but their style extends beyond clothing and accessories. Their dedication to expression manifests in frequent hair coloring.

Over the years, both Kurtz and Schneider have touted a spectrum of colorful coiffures, included but not limited to: pinks, purples, reds, teals and even multiple colors at once.

For Kurtz, the change involved changing their brown hair to a blonde color during middle school. It wasn’t until Kurtz’s second year of college that they started experimenting with more flamboyant hair colors. After perusing a local beauty store with a friend, Kurtz came across the section containing bright hair coloring products.

“On a whim we dyed my hair purple that night, and I haven’t stopped since,” Kurtz said.

When Schneider was 15, he decided to grow out his hair, abstaining from the normal buzzcut style his parents gave him. Schneider’s decision to alter his hairstyle was a spur of the moment decision and he prides himself on expressing himself via many different hair colors.

“I can rock any color of the rainbow,” he said.

Both Kurtz and Schneider enjoy how their unique hair palettes and styles let them stand out in a crowd, yet for both, being able to manipulate their hair has another, much more personal meaning.

For Kurtz, being able to change their hairstyle is a sign of overcoming society’s misconceptions about people who do not conform.

“We live in a society that often shames people for dressing how they want, especially when it doesn’t fit what society’s standards of beauty are,” Kurtz said.

Kurtz said that before starting college, they felt more self-conscious about both personal appearance and hair style. Kurtz’s decision to be bolder in their hair choices reflects their relatively newfound confidence.

For Schneider, modifying his hair has therapeutic effects, calming him when he feels overwhelmed. Schneider said that he tends to change his hair color more frequently when he feels stressed by schoolwork.

He said that overall, people have been accepting of his colorful form of self-expression, yet there are still misconceptions that may exist towards people with unique stylistic choices.

Schneider realizes some people might view unique hair colors as immature or unprofessional. Although he’s familiar with the lecture regarding employers being wary of applicants with colorful coiffures, he simply shrugs off the critique.

“If my hair is the one reason I didn’t get a job, then I really didn’t want that job in the first place,” Schneider said.

Schneider also explained that it is alright for people to label individuals with distinguishable hair colors as different. The problem, he said, is that society needs to become more accepting of that difference.

Schneider also thinks that society’s negative view regarding unconventional hairstyles is similar to the pressure that society places on body image.

When explaining the similarity between stigmas surrounding body image and unique hairstyles, Schneider explained, “I think it’s very similar to the change that we’re trying to get in body in image struggles. We just need to be more accepting of what people want and what people are. Instead of trying to enforce this idea that this very narrow field is what we accept as real.”

According to Kurtz, there definitely is a stigma surrounding people with unique hair colors and hairstyles. Kurtz believes that society’s construction of gender roles is partially to blame for such negative stereotypes. According to Kurtz, females with shorter hairstyles might be labeled as lesbians while men who dye their hair or take the time to style might be labeled as gay. In both instances, not only are gross assumptions being made about an individual’s style, but homosexuality is cast in a very negative light.

“ It all comes down to gender. Society has such cookie cutter ideas for how men and women should act, and it’s all pretty bogus to me. If society changed the way gender is framed, I think a lot of these stigmas would disappear,” Kurtz said.

Kurtz also pointed out that it is harmful to make assumptions about people based on their appearances.

“You can’t look at someone and know what their gender is, or their sexuality, or even their sex– a lot of people are in the mindset that you can,” Kurtz said.

Schneider, like Kurtz, feels that hair modifications serve him well, allowing him to express himself in a visible manner. This winter, Schneider plans to dye his hair a bright shade of fuschia to combat the gloom that winter brings with it.

“(Hair coloring) is an effort to make yourself happy with yourself,” he said.

Though there may be people who disapprove or look down upon their unique expression of themselves, Kurtz is content with their hairstyle and hopes, above all, to inspire others to feel free to express themselves.

“I hope that by being confident with such a unique sort of hairstyle, that I can help empower others to do the same,” Kurtz said. “There comes a point where you just have to stop caring about what others will think and be yourself.”