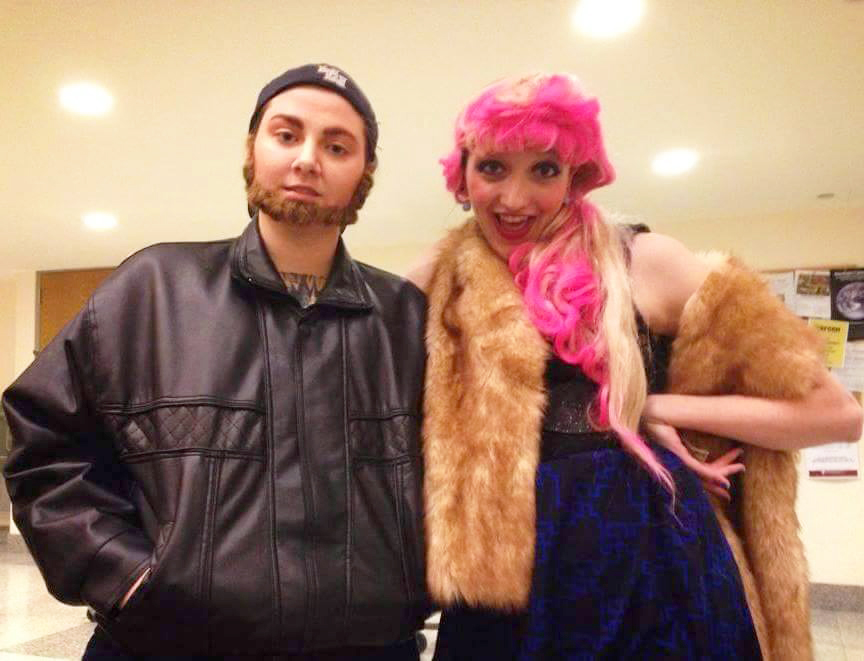 Sexuality and Gender Alliance Co-Presidents Kyle Benjamin and Zach Hruby hope to provide a platform for open minds and new ways of thinking regarding gender norms at the second annual drag show.

Benjamin and Hruby have been busy making preparations for the show, which is set to take place Friday, March 13. The event will be a joint collaboration between SAGA and Alpha Psi Omega, Concordia’s Theatre Honor Society.

Hannah Amundson, President of APO has also been busy coordinating the event, with some of her responsibilities including organizing technicians, make-up artists and performance coaches.

“We’re theatre majors so we have a lot of resources and a lot of know-how about production,” she said. “We’re producers, really.”

According to Benjamin, last year’s drag show went very well despite it being the first drag performance at Concordia.

“We were kind of walking on tippy-toes with it last year, and this year we have a little more freedom,” Benjamin said.

One new addition to this year’s drag show is that, in addition to Concordia students, faculty members will be encouraged to perform.

According to Benjamin, drag performances are important ways to get people to think outside of the box when it comes to the traditional gender roles that society upholds.

“Drag draws into question gender roles and the way we perceive gender in society,” Benjamin said. “Whenever you can start a conversation about that it can be very productive … a lot of the traditional gender roles we see right now can be very harmful and oppressive in some ways.”

Benjamin also said that there are a lot of misconceptions surrounding drag shows, such as them being exclusive performances, when in reality they are open to everyone.

“Allies are welcome to be performers,” Benjamin said. “A lot of performers are  hetereosexual-identified people. A drag show is something that’s supposed to be inclusive, and so having that available space open for all people is something important to emphasize … a lot of straight people would never even look in that direction as a form of entertainment, and they’re missing out.”

SAGA strives to create an open environment, and that is something Amundson appreciates.

“We like our partnership with SAGA, because SAGA is so good at making events really welcoming,” Amundson said.

Hruby pointed out that another misconception about drag shows is that the performers are strictly trying to express their identity.

“It’s another type of performance,” Hruby said.“I think a misconception that we see often is that the people who do perform … [are] doing it as a joke or as an expression of their identity. That’s not always the case. Sometimes it’s just for the fun of the performing.”

Another common misconception is drag performances only showcase drag queen performers. This is false according to Amundson, who says that drag kings can also perform.

Typical drag shows, according to Benjamin, consist of performers dancing and lip syncing.  Audience members are encouraged to dance along and cheer on the performers, who traditionally don elaborate costuming and makeup.

“The transformation that drag queens and kings take on is something really special to drag shows and that’s what makes it kind of magical,” Amundson said. “Makeup for a drag performance is an art.”

Amundson said that there will be makeup artists to assist performers who may be unfamiliar with drag makeup.

Both Benjamin and Hruby realize that not all people may be familiar with drag performances. Hruby says for those attending a drag show for the first time, the key is to be open to the new experience.

“Just have an open mind, be willing to see what’s happening and just enjoy it,” Hruby said.

There will be an admittance fee at the door and the proceeds will go to Kaleidoscope, a LGBTQ support group centered in the Fargo-Moorhead area. Audience members can also designate money towards their favorite performer and thereby increase their chances of being crowned the winner of the drag show.

If you are interested in performing in this event, applications are due Friday, Feb. 13. Those interested are asked to contact Amundson or email SAGA at saga@cord.edu.

Those who are interested in performing, but may be feeling a little apprehensive are also encouraged to apply.

“If anyone would like to, but they’re very nervous about performing because they’ve never done it before, we do have people who would be more than willing to help them with their services,” Hruby said.

Amundson says that there also will be several peer mentors to assist performers. The goal is to create a safe, comfortable environment for audience members and performers alike.

“There is a stigma against drag culture and that’s something we really want to avoid,” said Amundson. “We really want to celebrate what [drag] can be [and] what it can do for performers and audiences.”

For Amundson, drag performances can and should be celebrations for performers and audience members alike.

“We strive for a welcoming and safe environment where audience members leave being like, ‘holy s– that was so much fun’ and performers leave feeling like they were king or queen of the world for just a minute.”