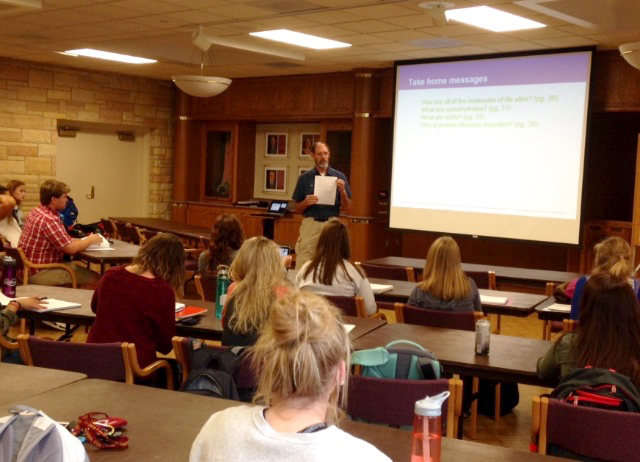 The sprucing up of the new Jones and Ivers buildings has not yet begun, but the adjustments to accommodate the construction have been unpleasant for some students and faculty.

Construction begins after Thanksgiving break, which means science professors must be finished with typical full-semester labs within Jones and Ivers by late November — an inconvenient obligation for both faculty and students to adapt to.

Biology Professor Dr. Ellen Aho said that to cope with the shortened time, professors in the science department have had to condense certain labs and cut others altogether.

“Faculty have modified their syllabi to prioritize material,” Aho said. “It all boils down to cutting a week or two. We are well aware of students’ needs and they will get the material and what they need to prepare for the future.”

According to Rutherford, cadavers are normally offered for both academic semesters, but this year they will only be offered until Dec. 1 because of the lack of facilities. Since the cadavers will not be available again until the fall of 2017, a third section of lab was added to allow more students to enroll in it this fall.

“We haven’t taken out anything [from the syllabus], the pace is simply faster,” Rutherford said. “The students have to remain focused and make good progress each day.”

Review time after class has been added, which allows students to return to the labs to observe the cadavers. By having additional time outside of class, the labs are spent dissecting and not reviewing, Rutherford said.

Junior biology major Alec Boike is one of the BIO 411 students adjusting to these changes. He was encouraged by professors to take a lighter load of classes to prepare for a more fast-paced semester with the cadavers.

“We have half the amount of time to do the same amount of work and…it’s much more intense,” Boike said.

The intensity is a trade-off for the opportunities students have by taking anatomy this semester. Since the cadavers will not be available next year, students had several options for replacement anatomy courses: Take the course at MSUM, or take the computer-based anatomy course at Concordia next year. Boike was one of many students in this predicament on deciding which course to take.

“She [Rutherford] told everyone to apply if they were interested and if you didn’t get in we could always go take it through MSUM,” Boike said. “But fortunately, I got in.”

“It’s all going to be computer based next year, so that’s why I was more interested in taking it this year even though it was going to be more time-intensive,” Boike said. “It’s such a good opportunity to work with cadavers.”

As for microbiology, a number of safety considerations prevent faculty from holding labs for the class next year, Aho said. One of these considerations is the unavailability of a piece of equipment used to sterilize all material needed in microbiology labs.

“I teach in Birkeland Lounge and I like the space better,” Aho said. “It takes a lot more time to run around campus, but the facilities themselves have been good. The custodial staff has done an excellent job in preparing these facilities.”

Dr. William Todt, biology professor, has not had any major problems with the rooms that classes are being held in, but finds the time factor to be a negative component of the situation.

“One day, I came over [to Olson] for a lecture and I forgot something and I had to go back to Fjelstad,” Todt said. “What used to take a minute now takes 10 minutes.”

Professors were a little worried about students not being able to locate their new offices, but it does not seem to be a problem so far, Aho said. Besides the temporary heat, there should not be any long-term problems for faculty with their offices in Fjelstad.

This is a different story for the students. Senior chemistry major Hannah Weber found the professors’ new office location to be an inconvenience because professors are in their offices less often.

“It’s harder to get ahold of professors because they are teaching all over campus,” Weber said. “They’re not in their offices as much as they were before.”

The sense of community that developed between science majors when they were all in the same building seemed to be lost during this transition too, Weber said.

“You don’t see professors and peers who are in the same field as you, as often,” Weber said. “It’s kind of like our home is gone.”

Rutherford hopes this sense of community is rebuilt as time goes on.

“There will be a couple semesters where we will have to be flexible and learn to adjust,” Rutherford said.

The updates on the science buildings are needed because the current facility is not up to current code standards and labs cannot support today’s technology, according to Lauren Wilson’s article, published on Dec. 11, 2014. Aho reviewed Wilson’s article and confirmed that the information is still correct.

“The remodeled Ivers and Jones complex will more fully support active, engaged student learning in classrooms and laboratories,” Aho said in an email interview. “There will also be improved student study areas and comfortable informal learning spaces for students and faculty to work together in small groups. The renovations will also enhance the safety and visual appeal of the buildings.”

“The new science building is going to be great and definitely will outweigh this a little bit,” Weber said. “I’m super happy for all the people who will have the opportunity to use it.”