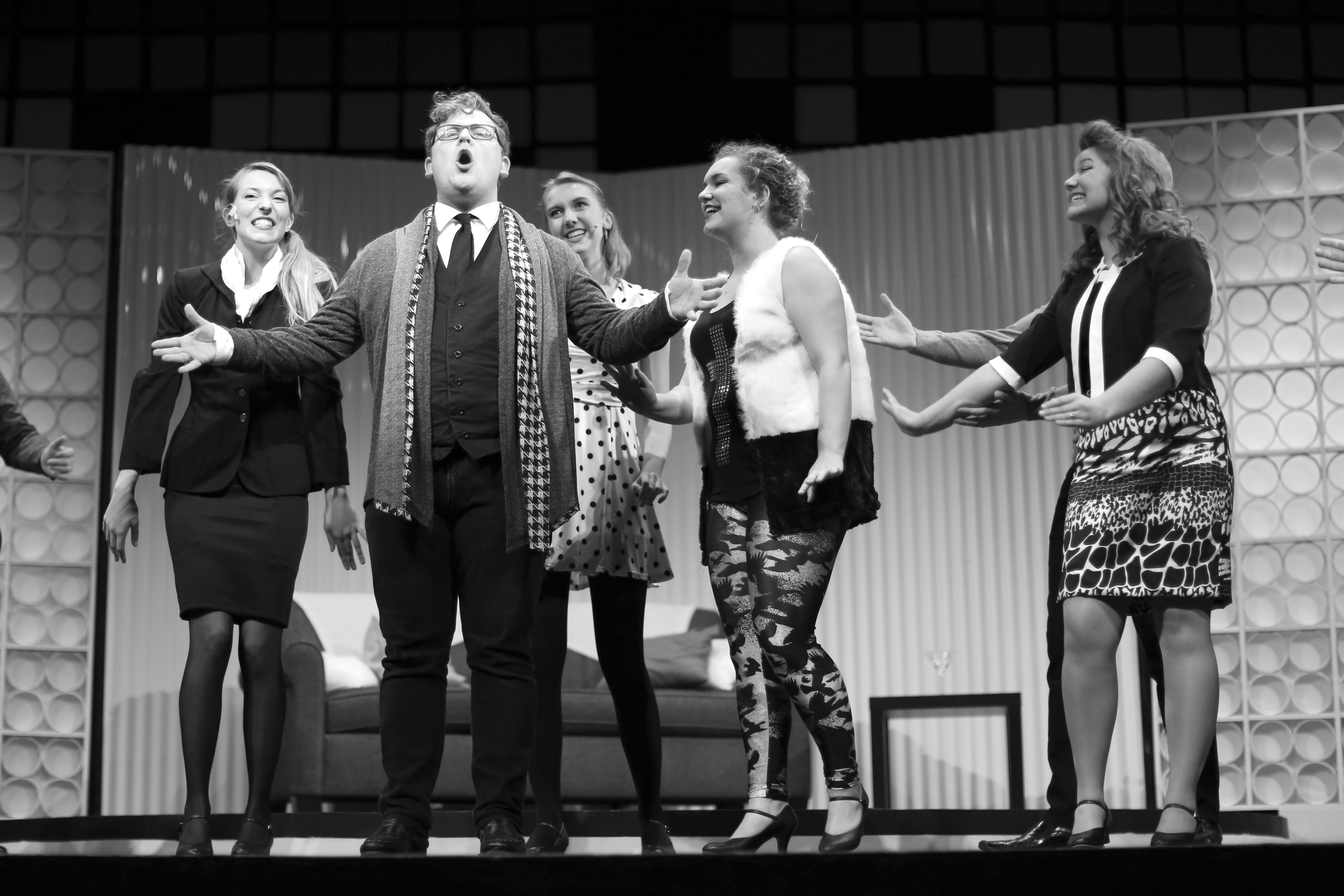 Director Sally Story said the department’s upcoming production, Stephen Sondheim’s Tony award-winning “Company,” tells the tale of Bobby, a 30-something New Yorker attempting to navigate the single life while surrounded by couples. “Company” may not spark the same fear in its audience as did the blood and gore of “Dracula,” but Concordia’s production of the show does have a twist: the 18-person cast includes MSUM student Jessica Vines.

David Wintersteen, head of Concordia’s theatre department, said there is an open audition system in Fargo-Moorhead which allows Concordia, MSUM, and NDSU to cast outside of their own departments. This system provides directors with opportunities to find actors from the other colleges as well as local high schools, but Wintersteen says that Concordia always gives first priority to Cobbers when casting. He could not recall the last time that Concordia had a student from MSUM or NDSU in one of their productions, saying that it may even have been “before his time.”

“It’s very uncommon,” Wintersteen said. “It always comes about when we have an unusual casting circumstance.”

An unusual circumstance is exactly what Story encountered when casting “Company,” specifically the role of the Vocal Minority. According to Story, this role belongs to a group of four female singers who provide backup vocals from below stage level, next to the orchestra. These performers are invisible to the audience for most of the show, which can make casting difficult.

“Actors sometimes have an issue with that,” Story said. “They want to be seen.”

On their audition forms for the show, actors were asked to state whether or not they would accept a role in the Vocal Minority. Only a small handful of Cobbers selected “yes,” and with one spot left to fill, Story turned to Vines.

Vines, a junior jazz studies major at MSUM, made her musical theatre debut this summer in West Fargo Summer Arts Intensive’s production of “Rent.” It was through this experience that she met Concordia senior Jonathan Wells, who will be playing the lead role of Bobby in “Company.” Wells introduced Vines to the music of “Company,” and encouraged her to audition in September.

As an outsider, Vines knew that her odds of being cast were slim, so she came in only looking to gain more experience in auditioning. With this in mind, she immediately checked “yes” on her audition form where it inquired if she would accept a role in the show’s Vocal Minority.

“I think I came at it from a much different perspective from a lot of the other people that auditioned,” Vines said. “For me, the music is the most important. So what if I don’t have a character or a name?”

Vines’ positive attitude and big voice left a strong impression on Story, and when the cast list went up in September Vines was thrilled to see her name among the Concordia students.

“I know how talented the people here are,” Vines said. “[The directors] have watched them grow and know the full extent of their talent. I was super-duper excited to even be considered with them knowing nothing about me previously.”

In addition to her excitement, Vines was also a bit nervous coming into the department knowing only one person in the cast. However, aside from getting lost on campus before her first rehearsal and having to call Wells for directions, she has quickly found a home in Concordia’s theatre department.

“I don’t even really think of it like me being from MSUM,” Vines said. “I just think like, ‘Oh, we’re all here to put together this show.’”

Being hidden in the pit and rehearsing separately from the rest of the cast, which deterred many Cobbers from auditioning for the role, has allowed the members of the Vocal Minority to grow especially close. Vines said that Olivia Berglund, Christie Kullman, and Olivia Lapage, her fellow singers, have been “very welcoming.”

Kullman, who has been involved in Concordia theatre both on and off stage in her four years at Concordia, has enjoyed the experience of working with Vines.

“Honestly, I kind of forget that she isn’t a Cobber,” Kullman said. “There isn’t a rift saying ‘Oh, she’s a Dragon.’ She’s really nice!”

As opening night draws near, Vines finds herself filled with both excitement to see “Company” come to life before an audience and gratitude toward those who have welcomed her so warmly.

“I’m super thankful for the opportunity to work with different people,” Vines said. “I hope that it’s been positive for the people I’ve interacted with to have ‘fresh meat’ around.”

Performances of “Company” will be held at 8 p.m. Nov. 12-14 and 19-21 and at 2 p.m. Nov. 15 at the main stage of the Frances Frazier Comstock Theatre. Tickets are free to all Concordia students, faculty and staff. Cost is $10 for adults and $5 for other students and senior citizens.

This article was submitted by Katie Beedy, contributing writer.

2015-11-12
Previous Post: 163 trees used each year in printing
Next Post: There’s no room for joking in the sexual assault debate