By: Anna Bushy
In: Community, Featured, News
With: 0 Comments 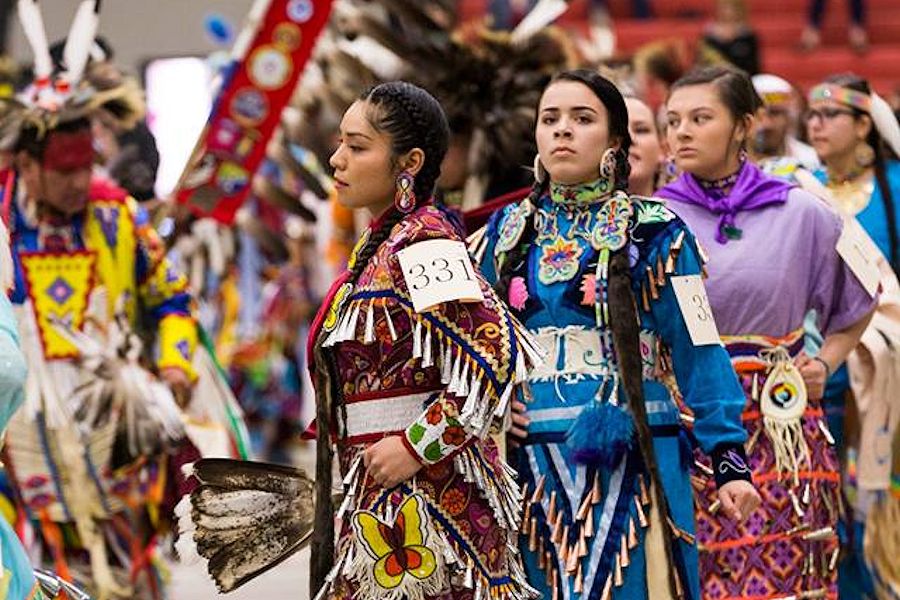 On Saturday, March 30th, an estimated 3,000 people from all walks of life gathered in Memorial Auditorium at Concordia College for the 30th annual Woodlands and High Plains Powwow (WHPP), hosted by the Tri-College University.

The Tri-College University campuses, consisting of Concordia, MSUM, NDSU, M State and NDSU, collaborate with one another to plan WHPP. The traditional powwow attracts dancers and spectators from across North Dakota, South Dakota, Minnesota, Montana and Canada. While the event was held at Concordia College this year, the Tri-College University campuses take turns providing a venue for the event.

Jered Pigeon, a WHPP planning committee member and the director of diversity and inclusion at MSUM, says that the WHPP’s location at a Tri-College campus is significant.

“The reason that this powwow started was to support American Indian students and honor them as they graduate, so that’s the reason that the powwow is [at a Tri-College campus],” Pigeon said.

While the WHPP celebrates the educational achievements of American Indian students, it also serves the purpose of providing an opportunity for Tri-College students to learn about American Indian culture and gain valuable perspectives.

“Inclusive and global perspectives within students is not only necessary: it’s mandatory,” Pigeon said. “As students are out operating and working in a global society, it’s good to have not just awareness of some cultures, but direct experience with various ethnicities, genders, religions, and all types of identities.”

Along with offering a cultural experience to college students, the WHPP also serves to educate community members of all ages and backgrounds about American Indian culture.

“I think it’s really important for community members to come to the powwow to participate in the Native American culture and to learn about their traditions,” Gabbard said.

AJ Jennissen, a first-year student at Concordia, was able to experience these aspects while attending his first-ever powwow at the WHPP.

“I felt I learned a lot just by being able to experience a different culture that I don’t get to see every day,” Jennissen said.

While Ruth Anna Buffalo, the first Native American Democratic woman elected to the North Dakota Legislature, was unable to attend the WHPP this year, she has attended it before and speaks fondly of her experiences. Her earliest memory of the WHPP was when she was honored as the head woman dancer when she was in high school. At that time, she received her first eagle plume.

Buffalo also speaks of the impact that Native American cultural events like the WHPP have on the community as a whole.

“These events build a better understanding of who we are as human beings and provide a brave space for people from all walks of life to enjoy community, food, music, dance, art, and, above all, laughter,” Buffalo said. “It is truly good medicine.”

While the WHPP will not be occurring again until next year, there are many more opportunities to experience all that a powwow has to offer. Lists and information about local, upcoming powwows can be found on drumhop.com or powwows.com.

2019-04-11
Previous Post: Conservatives deserve a voice on campus
Next Post: How to write a paper in a night