By: Sallie Steiner
In: Variety
With: 0 Comments 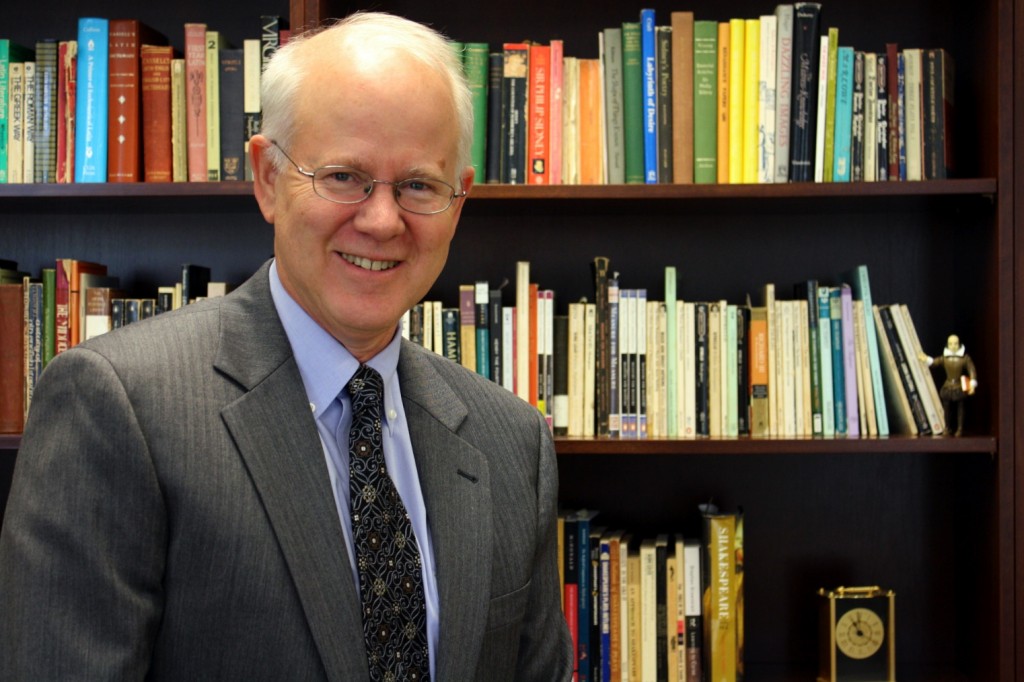 Photo by Rachel Torgerson. Dr. William Craft shows off one of his bookshelves, packed with books from various genres and authors.

In some senses, walking into the office of Concordia’s President Dr. William Craft is just like walking into the office of any other administrator. The finely polished furniture and upholstered chairs could be found in any of Lorentzsen Hall’s many administrative offices. However, two things set this room apart from the rest. The first is the large bookshelves that line two of the walls, filled with books that span a wide variety of authors and literary ages and genres. The other is the man who reads them.

“They don’t just sit there, by the way,” Craft said.

He gestured to his books which he said he picks up frequently whenever he needs to check something or just when the mood strikes him.

“They’re windows and doors,” Craft said of his books, saying that he has used literature as a way to broaden his perspective and give him guidance throughout his life.

Craft first became interested in literature at an early age. He remembers being read to and told stories as a young child. As he grew up, his interest in books and literature was fostered by his relatives, many of whom were educators themselves. Despite his love of literature, Craft was not originally planning to take his interest further in college, but that changed.

“When I went to college, I was thinking of becoming a lawyer or an architect,” Craft said. “But as I got into college…I found that reading great poetry and drama and fiction, reading great essays, you know, it answered something in my spirit…it was liberating.”

Craft’s colleagues at Luther College in Decorah, Iowa, where he was academic dean before coming here, have seen the impact books have had on Craft.

“What was so powerful about his use of literature is that all books— new, old, and ancient— speak to him as his contemporary,” said Mark Muggli, professor of English at Luther College. “They are as alive for him as are today’s newspaper stories, and that makes them alive for the rest of us, too.”

Muggli admired the job Craft did, not only academic dean, but also as a professor.

“Although academic deans are very busy people, Bill managed to carve out enough time to teach a Shakespeare class most springs,” Muggli said. “He did an excellent job, his students love his course and it gave him great pleasure amidst all of his tough decision-making.”

Craft said he is interested in continuing his teaching life at Concordia, but as of now has no definitive plans to pick up a full course in the English department. He will begin as early as next week, however, to appear as a guest in several Concordia classes. Craft has also become very well-liked by the Concordia family in the short time he has been here.

“I’m very taken by him,” said Bruce Vieweg, associate provost, chief information officer and interim dean of students. “In such an incredibly short period of time, he has come to know this campus in an incredible way.”

Vieweg is impressed by the way Craft has eagerly incorporated his love of literature into his job at Concordia, like assigning a book read for the President’s Cabinet. They are currently reading The Heart of Higher Education: A Call to Renewal by Parker Palmer, Arthur Zajonc and Megan Scribner.

Vieweg believes that Craft’s interest in the humanities will enable him to lead the college deeper into its liberal arts focus.

Craft sees literature as having a strong influence on his performance as a college administrator and participant in this conversation about the liberal arts at Concordia.

“I think [literature] extends my imagination,” Craft said. “I think people that do a job like this need to think creatively about the history of the place they serve and how they can expand that history into the future.”

Craft said that imagination helps to broaden his perspective, allowing him to connect with the diverse array of people he sees daily as part of his job as president.

“That kind of extension of imagination, that kind of crossing borders into other lives and other worlds is very important,” he said.

For Craft, the author that epitomizes this need for imagination is one that he holds dear in his heart and on his bookshelf.

“If you look in the middle over there, you’ll see a lot of Shakespeare,” Craft said.

He gestured over to one of his bookshelves, the middle of which was filled with many of Shakespeare’s great works, and a small figurine of the Bard himself.

“What I like about Shakespeare is that he is not afraid to give a complete picture of what it means to be a human,” Craft said.

He said that Shakespeare had much to teach people about the importance of playing and imagining.

“One of the things I get from the study of Shakespeare is the value of play, of playfulness,” Craft said.

Craft also said that this is what faculty and administrators in higher education need to do on their campuses: inspire students to play and imagine.

Craft thinks a focus on this kind of inventive imagination will allow students to become more responsibly engaged on campus and beyond school.

“I think we need to keep reimagining the part we will play out in the world,” Craft said.