‘Cuckoo’ shines as a “debut” 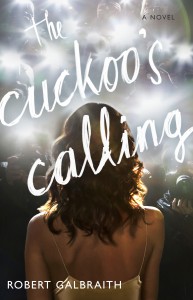 Unless you were completely unplugged this summer, you’ve probably heard about The Cuckoo’s Calling, the first installment in a new crime fiction series by “debut” author Robert Galbraith. The Cuckoo’s Calling was published in April 2013, but it wasn’t until August that J.K. Rowling was revealed as the true author, which basically caused the internet to explode. Why did JKR choose to use a pseudonym you may ask.  Well, the FAQ section on Robert Galbraith’s website (which does not, much to my disappointment, redirect to jkrowling.com) offers an explanation: “I was yearning to go back to the beginning of a writing career in this new genre, to work without hype or expectation and to receive totally unvarnished feedback.”

The expectation and hype placed upon celebrities features as a central idea within the novel.  At the opening of the story we meet Cormoran Strike, an ex-member of the military police turned private detective following a tour in Afghanistan.  He, along with his temporary secretary Robin, is hired by a wealthy man to investigate the suspicious death of his sister, supermodel Lula Landry.  The client believes, contrary to popular belief, that Lula was murdered and commissions to Strike to prove it.  What follows is a gripping murder mystery reminiscent of an Agatha Christie story, but what sets it apart is the witty, less-than-subtle commentary on modern celebrity culture.

Warning: this book is a page-turner.  You will read it for hours at a time, especially when you should be doing other things.  As a lifelong fan of Rowling’s writing, I purchased the eBook as soon as she was unmasked as the author, and I was hooked almost immediately.  Though her description could be quite wordy at times – I often forgot where sentences were going halfway through – I was amazed at how well she chooses her words.  Rowling’s ability to find precisely the right word to convey her meaning is a much coveted skill among writers.  In the case of Cuckoo, however, her wording often goes beyond the vocabulary of the average reader (I basically had dictionary.com open the whole time I was reading).

The only half-criticism I have of Cuckoo is this: there is simply a lot going on.  I am usually pretty good at keeping characters and details straight, but even the minor characters in Cuckoo have really important roles within the plot; I found myself having to take pretty detailed notes to keep characters and events straight.  When I sat down to read, I often had to backtrack a couple of pages to remember what was happening and get everything sorted out before moving ahead. While this isn’t necessarily a bad thing, it did not make for casual bedtime reading.  You have to know what’s going on or you will get lost.

In spite of the complexities, I really enjoyed reading The Cuckoo’s Calling and would recommend it to any fan of crime fiction, or of Rowling’s other work.

2013-09-26
Previous Post: Raise the debt ceiling: con
Next Post: The lack of a handshake seen ’round the world