“Earnest” is a Wilde Time

By: Meg Hanna
In: Blogs, Reviews
Tagged: Importance of Being Earnest
With: 0 Comments 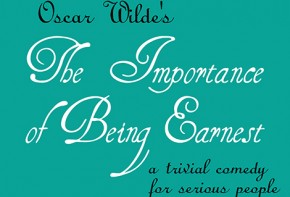 It’s October now and that means it’s the beginning of the theater season!   So, as you should all be aware, this Tuesday was opening night for the cast and crew of The Importance of Being Earnest, which is one of four plays written by Oscar Wilde, who is also a celebrated poet and author of one novel, The Picture of Dorian Grey. Earnest is being held in the Lab Theater, inside the Francis Frazer Comstock Theater,  with audience seating on all four sides of the stage, which made for interesting viewing.  I was impressed with how the actors managed not to isolate any one section of the audience but addressed each side fairly equally.

Earnest opens on the home of Algernon Moncrieff, played by Riley Peterson, as he is preparing for a dinner party.  We then meet his good friend “Ernest” played by Ben Habegger, who reveals he has been living a double life.  Ernest reveals that his name is really Jack, and that he has invented a wayward brother as an excuse to visit his love interest Gwendolyn, played by Emily Breitbach, who happens to be Algernon’s cousin.  As the show goes on, cases of mistaken identity are commonplace as the play explores – in a hilariously witty way – the triviality of everyday life.

The entire cast played their parts fabulously, but I would like to give special recognition to one actor in particular.  Thomas Hacker, who plays Gwendolyn’s mother, Lady Bracknell, really pulled off his part.  It’s not often that a man can play a female role in a convincing way, but Hacker did that, and did it well.  He didn’t draw attention to the fact that he was playing a woman, or try to make it funny.  Plus, he maneuvered high heels and a 19th century style gown with more grace than I could have.  Megan Garry, props master for Earnest, told me that Hacker went as far as to shave his eyebrows off and draw them back on again for this role.  That’s dedication!

Collette Hagen also deserves some special applause.  She does not play a lead role but her character, Miss Prism, manages to steal the spotlight in every scene she’s in.  She delivers her lines wonderfully and uses physical comedy to great effect.  I won’t give too much away, but there’s a scene where she fans herself after speaking to her love interest, and that action says more than any line could.

The play is set in 1895, and both the props and the scene design reflect that wonderfully.   There is a lot of fast moving witty dialogue, but it’s the situational humor that makes the show.  If you get a chance to see it this week, I highly recommend you do so.  Bravo to the whole cast and crew!