Get active with fitbit® 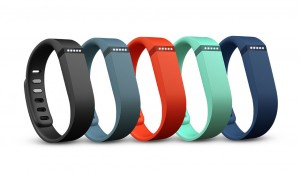 The flex is a band that clasps tightly around your wrist as you wear it throughout the day. During the day, the fitbit flex™ tracks how many steps you take, how many miles you’ve walked, and how many calories you’ve burned. During the night, it tracks how many hours you sleep, how many times you have tossed or turned, and it doubles as an alarm clock for when you need to wake up. The technology inside the wristband vibrates to wake you up so it doesn’t bother anyone else in the same room as you. Fitbit® also has a free app that coincides with the data the flex™ is mapping. In this way, the user can track their steps right from their mobile device.

The fitbit flex™ is one of the best products that fitbit® has to offer. Not only does it keep track of how many steps you have taken, but it helps to create personal goals. I have personally set my distance goal to 6 miles every day. Since I get a huge chance to walk around campus all day, the 5th mile is not so difficult to attain. There are those few days where I look down, tap my flex™ and it says I still have 20% left to go for my goal, so I make time later in the day to go for a walk or run. Not only does it help me to stay active, it helps to track how many hours of sleep I can get every night.

As the school year continues on, I find myself getting fewer amounts of time to sleep. With the fitbit®  flex™ tracking my sleep, I measure how many times I moved and was “restless.” From this data it is easy to see whether or not I should sleep in on Saturday and Sunday or not.  Even if that is the case, the best feature fitbit® flex has to offer is the alarm clock.

Waking up to loud blaring sounds of chiming bells or duck quacks, over time could probably end up making your roommate or partner very angry. The flex doubles as an alarm clock, but just a gentle nudge. The alarm clock feature could be described as the “morning back rub.” It is definitely not as glorified as a back massage, but you wake up with similar feelings when someone wakes you up with a small knead.

I have been using my fitbit flex™ since the beginning of August 2013 and I have loved every second. It helps me wake up without making my roommate angry, it helps me to keep track of my activity, and it also serves as a gentle reminder that I should continue to keep running and working out. For this same reason, the flex™ deserves 4.5 out of 5 stars.