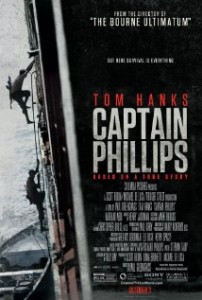 Over fall break, my parents and I decided to celebrate their birthdays by going to see Captain Phillips the story of ship that gets invaded by Somali pirates. It was a strange movie choice to celebrate a birthday with but I think we’d all agree it was a good choice.

The movie begins with Captain Richard Phillips preparing to leave for his three-month journey to deliver food around the horn of Africa. This trip required them to sail along the coast of Somalia, a country ridden with pirates.

Captain Phillips does a great job of showing Phillips’ character right in the beginning. We learn that he is very meticulous about every aspect of his job, especially in terms of safety precautions. This information is useful later when the pirates inevitably board the ship.

The fact that this is a true story makes it so much more enthralling to watch. The film takes us through the captain’s entire experience with the pirates and shows us how carefully the captain had in order to save not only his life, but his crew’s. Tom Hanks played his role as the captain very believably. In most action or suspense movies you aren’t shown the extent of the emotional trauma the character has gone through, but Hanks showed how taxing his characters experience was on his psyche.

I did feel that Captain Phillips was a bit obvious in its parading of U.S. military power against the Somalis. Granted, piracy is a huge problem and the pirates broke a multitude of laws, but I hoped the film would give the audience more insight on why it is such a problem in Somalia. What drives some of its citizens to pirate? Sources say that illegal fishing from foreign ships and toxic waste makes it impossible for fisherman to earn a living and thus turn to piracy. Rather than just point out the atrocities the pirates committed against Captain Richard Phillips and his crew, I was looking for more insight regarding the lives and welfare of the Somali citizens.