In the small pre-screening room of the medical clinic in San Lorenzo, Ecuador, Mike Rose and his new friend, Gonzalo, sat patiently waiting for their daily snack to be ready. The day was Aug. 14, 2013.

Rose was in his final month of a three-month long mission trip to Ecuador. He spent the last part of his trip volunteering at this clinic.

The past few days, Rose had noticed that Gonzalo had been snacking more often. Today, Rose decided to ask him about it.

Gonzalo told Rose that towards the end of each pay period, twice a month, funds got tight as he stretched each paycheck to purchase groceries for his family. Gonzalo, a middle aged man with grown kids, would choose to give up meals so that his family’s groceries would make it that much further.

The toast they had been patiently waiting for popped up, and with it came an idea.

As the Social Justice Coordinator in Campus Ministry Commission, Rose decided to bring his idea back to Concordia. He came up with a project that would help coordinate people to skip meals as Gonzalo did. Instead of putting that small amount of money toward their own meal Rose said, the money could go toward someone in need.

“(Gonzalo) was the first person I knew … who was forced to be hungry,” Rose said. “It had never been as real as that.” 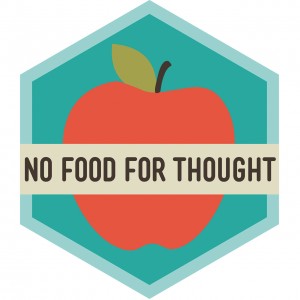 After a Facebook poll, Rose decided to name the project No Food for Thought. The goal of the project is to spread hunger awareness by encouraging people to skip a meal and donate that money saved at the end of each pay period toward a specific charity, Rose said.

Interested participants can visit the website, www.nofoodforthought.org, Rose created specifically for the project and sign up to receive reminder emails before the first and 15th of every month. The emails come with a fact or statistic about hunger awareness and remind participants to donate.

The participants can choose any charity to direct their bi-monthly donation toward, Rose said. It does not have to be hunger related. The project’s site includes a charity navigator to help donors decide where they would like to direct their money. If people cannot decide where to donate, they can send their money to that month’s featured charity, such as this month’s Feeding America — an organization whose mission is: “to feed America’s hungry through a nationwide network of member food banks and engage our country in the fight to end hunger.”

The amount people donate is based on approximately how much they think they spend on an average meal. As well as donating the meal money twice each month, they are encouraged to skip a meal, allowing them to directly experience the hunger many feel on a regular basis.

Maddie Grosland, a junior at Concordia, is one of those 126 who have signed up for the project. She said she decided to get involved because it was an easy way to give back.

The idea is simple, but the impact is big.

“Educate. Motivate. Donate,” is the slogan of the project: educating people about the prevalence of hunger, motivating people to take action and then using that knowledge and motivation to donate to a cause.

It is an easy way to live out Concordia’s mission, Grosland said.

Rose, who is a senior at Concordia, said he does not know what the future holds for No Food for Thought, but he is committed to it as long as there is interest.

The day was Monday, Nov. 11. Mike Rose sat patiently waiting in the atrium of Knutson Campus Center at Concordia College in Moorhead, Minn., advertising the kickoff of his project. A sign taped next to No Food for Thought revealed that President Craft had signed up. Now Rose is just waiting on you.