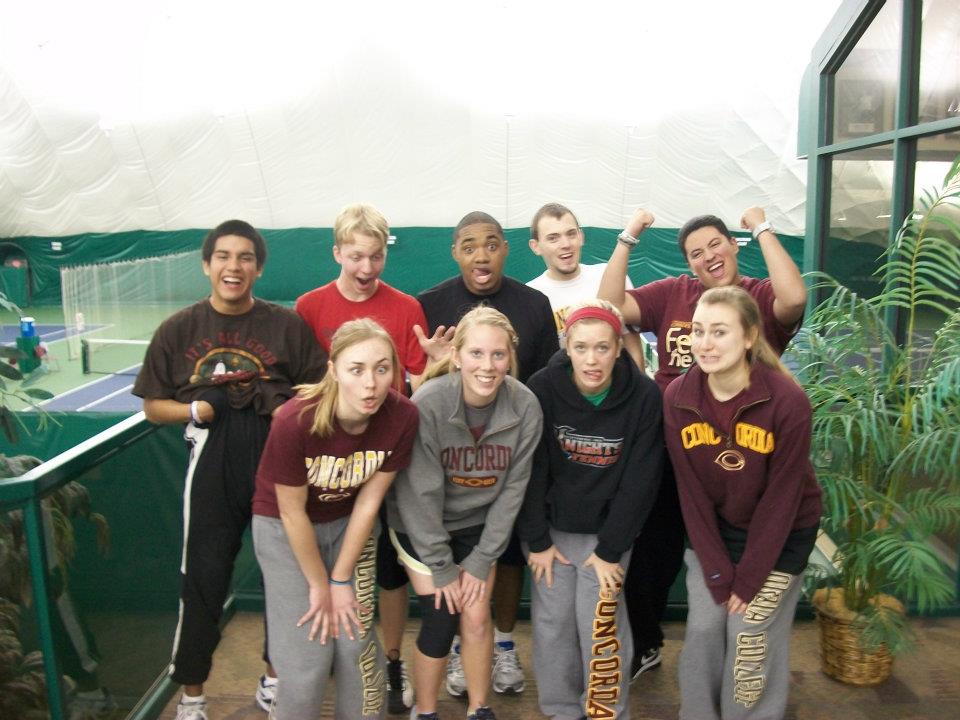 With the lovely warm weather bringing cheer to Cobbers all over campus, many students may want to be more physically active. Although it may seem strange to think of joining a club at the end of the year, one club that welcomes anyone to come play at any time is Concordia’s tennis club.

Captains Kirsten Hoaby and Phill Foster are always excited to see new faces come to one of their weekly sessions held mostly on Sundays and Thursdays from 8 p.m. to 10 p.m. When asked about the time commitment for the club, sophomore Phill Foster replied, “It’s flexible. Being on a team can be demanding, but with tennis club it’s all about having fun. People work all day so we want them to come to tennis club to have fun.”

Foster went on to describe how having different abilities in the club could seem difficult, but they have found ways to make everyone stay involved.

“We have members who could easily play on the tennis team for Concordia and some [who] have hardly ever played. We want them to just come and play and not be coached, so we play a lot of games instead of actual one-on-one or doubles matches,” Foster said.

A team favorite and example of one of these games is called “See Ya!” This is a game where four players are on the court and one person feeds balls from the outside. The interesting twist to this game is that the ball feeder makes up a random rule before playing the ball and whom ever hits it first has to abide by this rule. One such rule might be to hit it right out of the air or to hit it on the third bounce. Then the game goes on like normal after that until someone messes up. That person is then out and someone else rotates in.

Many other exciting games can be played during tennis club meetings, and the team tries to keep open communication and encourage anyone to suggest a game.

“I don’t think we’ve ever turned down someone’s suggestion for a game before,” Foster said.

Sophomore members Mitch Peery and Alexandra Johnson say that one of the best things about tennis club is the camaraderie that all of its members share.

“We all laugh a lot and bond.” Johnson said. “No matter what kind of day we’ve had we can just come there and laugh and make fun of each other.”

“The atmosphere is very chill and relaxed,” Peery said. “Everyone gets along.”

Both members have played for a few years and are planning to be involved in the club next year.

According to club captain Foster, the club has about 11 consistent members, but they can get 15-20 people there on a good night.

“This year it grew at a fast rate,” Foster said.

So what exciting opportunities can tennis enthusiasts look forward to next year? “We are planning to host a couple tournaments,” Foster said.

The first will be a test to see how everything goes for the team and will be played with all the members.

“Anyone can enter and we want everyone to be able to play each person in the tournament once,” Foster said.

With an open and friendly attitude, tennis club seems like the perfect group to join for anyone who is just starting out or has been playing for years to become active.