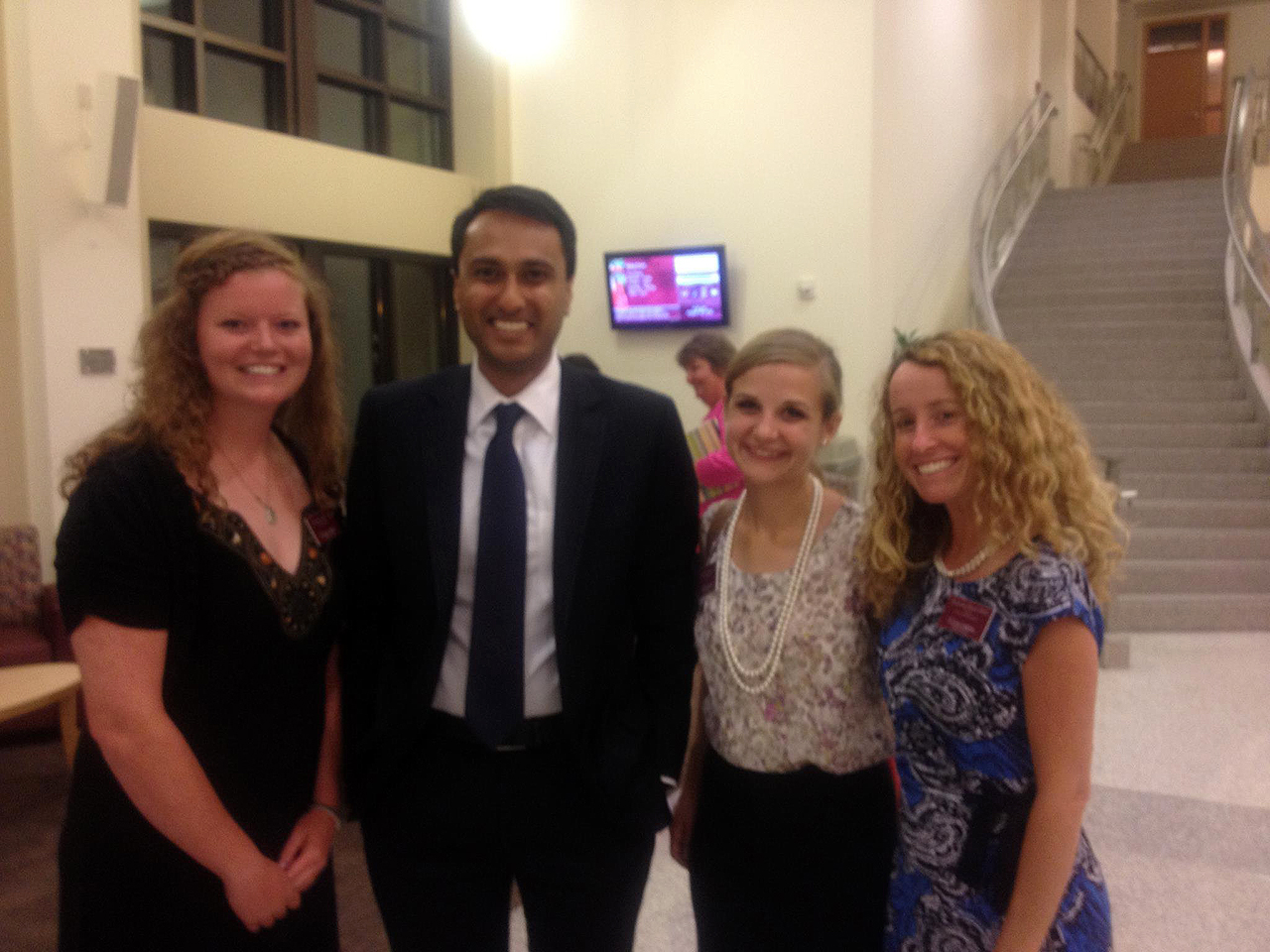 Just 10 minutes after the Centrum doors opened to the Thursday evening forum, there was standing room only. Live streaming in the Atrium was set up to accommodate those that were not able to snag a chair or floor space to hear Eboo Patel speak.

“It’s proof that we want to sing a new song, and Eboo sings it,” said Dr. Jacqueline Bussie, religion professor and director of Forum on Faith and Life at Concordia.

The engaging questions, including one from an MSUM student, and the standing ovations Patel received demonstrate the community’s eagerness for Patel’s message and his presence in Moorhead.

Bringing Patel to campus was not a simple task. Bussie began the process nearly one year ago. Just a few weeks into her first year here, Bussie began asking students and faculty who they would like to have on campus.

The first and most common answer? Patel. This author and peacemaker’s first book, “Acts of Faith,” was the 2010 summer book read. Choosing him was just the beginning. Because of his stimulating work in interfaith discussions across the nation, Patel’s visits are in high demand.

“He only visits 25 colleges or universities per year,” states Bussie, “and that’s a maximum.”

To host him, campuses must meet some requirements. First, the school must show dedication to embracing interfaith discussions. If the school demonstrates this, then Patel will do a casual interview with the campus’ President. This is how President Craft ended up having two phone conversations with Patel over the course of the 2011-2012 academic year. When Craft asked Bussie about some good talking points for those conversations, Bussie told him to simply talk about Concordia.

Not only has Craft made it a part of his work to bring about more interfaith discussions here on campus, but Bussie’s faculty position is a promise that the Concordia community is committed to this. As the director of the Forum on Faith and Life, she said she strives to help Concordia “deepen our compassion, create opportunities for encounter with the intra-faith and interfaith neighbor, and facilitate transformative conversations about faith and life.”

On the students’ side, the Better Together club has formed over the last two years. It exists to promote interfaith dialogue, service, and reflection. In addition, Concordia was accepted into President Obama’s Interfaith and Community Service Campus Challenge.

According to Anastasia Young, one of Concordia’s Interfaith Scholars, this challenge promotes finding common ground between those you have differences with, building relationships with them, and then having conversations about those differences.

With Concordia’s passion for Patel’s interfaith work, a contract was signed last April for him to visit this fall. Upon his arrival on campus, Interfaith Scholar Sarah Funkhouser hoped it would introduce the incoming freshman to Concordia’s serious commitment to having interfaith discussions. She wanted his visit to clarify what it means to live out our mission and Christian tradition.

Not only did Patel fulfill these hopes, but he went above and beyond, challenging Concordia to do more. Funkhouser identifies one of these challenges as owning our differences and then having interfaith discussions with others.

“It’s a chain reaction,” she said. “It’s paying it forward.”

Young pinpoints another of Patel’s challenges, saying the interfaith dialogues will not be easy, but that the campus cannot give up. As Patel signed her book after his evening presentation, he told her, “Keep walking when the snow gets deep.”

Young relates to it, and believes the work being done at Concordia matters. She was given the opportunity to travel to Washington, DC, as a part of President Obama’s challenge, and she affirms we are moving in the right direction. Not only are our actions directly affecting the Fargo-Moorhead community, but they are also having an affect on a national level, as Concordia becomes a leader alongside larger colleges and universities in interfaith conversations and the interfaith movement.

Never in her wildest imagination did Bussie think the Centrum would not be big enough for this event. But as Bussie and Patel maneuvered their way into the Centrum on Thursday evening, Bussie had nothing but a smile in response to all of the people. As for Patel, she recalls, “If only you could have seen the look on his face.”

As he stood in front of the crowd representing such a spread of faith communities, Patel addressed how it made him feel:

“Just to be in the mix is a blessing.”