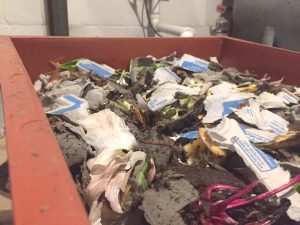 Concordia’s EcoHouse residents are giving back to nature by feeding their food scraps to worms that turn the waste into nutrient rich compost.

This process is called vermiculture or vermicomposting. According to EcoHouse resident Samantha Ferguson, the worms are contained in an indoor bin with multiple layers that can be taken apart.

“You’re cutting up a carrot and you have the carrot tops that you don’t use,” Ferguson said. “You can just toss that into the bin, and you mix it around and there’s worms in there that will eat it.”

According to EcoHouse resident Ben Stubbs, the bin is kept in the basement of the house.

“The EcoHouse has been doing this for a couple of years now,” Stubbs said. “It’s like little pets in the house.”

The process is slow, but simple. At the top of the bin there’s the waste that has just been put in, and there are little holes between the layers, so the compost will fall down and eventually fill up the bin, Ferugson said. It takes around a month for this to happen.

The compost can later be mixed with soil and used as a fertilizer for the garden, Ferguson said. When the EcoHouse residents take vegetables from their garden, they know that it’s directly produced from the vermicomposting,

“And then we get to put the waste from that back into the bin, so it’s just one big closed cycle, which I think is very cool,” Ferguson said.

According to Stubbs, the worms are different and smaller than earth worms. The worms they use are called red worms and are more suitable for the process. The worms can be ordered online, Stubbs said. 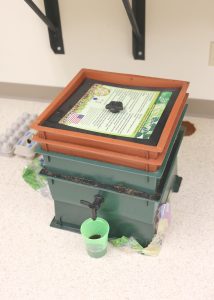 According to Ferguson, the worms thrive in dark and moist environments.

Concordia’s Sustainability Coordinator Samantha Westrate said the worms adapt easily to their surroundings and the amount of food they get.

The EcoHouse residents also put in newspapers and egg cartons, because the fiber makes the soil more nutrient rich as it helps the worms produce more waste, Ferguson said.

According to Westrate, when people hear “worm composting” they think it is disgusting and that you shouldn’t have it inside. However, when people actually see the system, they see that it’s very clean, well contained and does not smell, Westrate said.

According the Ferguson, the bin in the EcoHouse inspired Concordia Eco Reps to get one for Bogstad East last year, as a pilot project.

“We actually just got an email from a resident in Bogstad East saying we should add more bins because it is always very full, so it looks like people are using it, which is very cool,” Ferguson said. “Hopefully we can get more bins, make it more known and reduce more waste.”

Westrate said she thinks it would be a good idea to get more vermicompost bins on campus.

“There’s a green office program that we’ve started and I’d love to get that involved in it, so offices can maintain their own vermicompost,” Westrate said.

Anyone with more questions about vermicomposting can email residents of the EcoHouse at ecohouse@cord.edu.