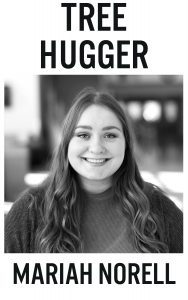 A few weeks ago, I went grocery shopping at Hornbachers. While I was checking out, the bagger asked me, “Paper or plastic?” Might I add, she had already begun placing my groceries in plastic bags. I corrected her and said, “Oh, I’d like paper, actually.” She responded with an audible sigh and rolled eyes.

I don’t know about you, but I think trying to save the planet shouldn’t be met with such annoyance. Since that incident, I’ve been making an active choice to either choose paper bags when I’m shopping or bring my own reusable bag.

Nearly one trillion plastic bags are used each year, which generally only serve the purpose of the trip back from Target and as trash bags for those god-awful tiny trash bins stores somehow convinced us to buy freshman year. These bags usually end up in landfills, but have also been found in the ocean and other natural habitats around the globe. Did you know that every piece of plastic ever made is still lingering around the Earth in some way, shape, or form? Even though the recycling of plastic has undoubtedly become more prevalent, only one percent of plastic bags are recycled.

Not only are these bags completely unsustainable, they actually cost you a lot of money. Yes, they are free at checkout, but stores in the U.S. alone spend billions of dollars on them per year, ultimately raising the prices of the products we are consuming. There is really no benefit, so why do large retail stores continue to produce them? Why have we, as a society, not decided to transition to a better alternative?

Some of the larger named stores, like Target, have begun to offer sustainable options. Just last week I purchased one of their reusable bags for only 99 cents. Now every time I go to Target and buy more things than I intend, I will save five cents at the checkout and ultimately feel like less of an environmental burden. Target also has in-store recycling, which includes options for plastic bags (it doesn’t have to be a Target bag), glass, plastic, aluminum, and even MP3 players, cell phones, and ink cartridges. As if you didn’t already have enough reasons to love Target, these are a few more.

While the reusable bags stores offer are great, if you don’t want to buy them, you certainly can just use bags you already own. If you’re like me, you probably have an unhealthy number of those string bags you got in middle school just waiting to be put to good use.

My hope for the future of retail stores is that they will begin either taxing the use of plastic bags or ban them entirely. Several countries in Europe are already implementing this, and it could eventually lead to an 80 percent reduction of plastic bag use. The United States is beginning to see this trend as well. There are around 150 cities in the US that have decided to ban the use of plastic bags, and this will hopefully begin to grow on a statewide level.

So next time you go to check out your groceries and the bagger glares at you for choosing paper instead of plastic, simply smile and know that you are making the responsible decision as a global citizen. It is truly the little things that we can do on a daily basis that will see the most permanent and widespread change. Happy shopping, Cobbers.