By: Kate Campbell
In: Campus, News
With: 0 Comments 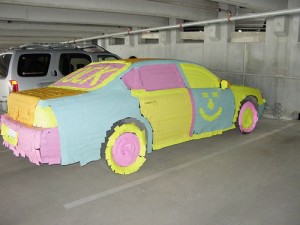 No one knows exactly how long the music major senior prank in Hvidsten has been going on. Although, according to current seniors, they can remember there has been a music major prank every year since they were freshmen. Now that there are only a few more weeks until graduation, the senior pranksters are at it again. The Concordian has the inside scoop; however, in order to protect the identity of the pranksters and keep the tradition fun, student sources will remain anonymous.

According to Anonymous One, no one has ever been caught while pulling the prank, but there have been a couple close calls.

“Security came in halfway through the senior’s set-up last year,” Anonymous One said. “No one got caught, as far as I know, but they had to abandon the rest of their set-up.”

Anonymous Two explained that the problem hasn’t been students getting caught, but students pulling bad pranks. Some of the past pranks have given the senior music major prank a bad reputation due to damages or messes left over from the prank.

“In the past, people have done things that haven’t been too smart, like putting fish in the toilets, which is kind of cruel, or caused scratches on the floor by dragging in sandbags,” Anonymous Two said. “Those kinds of actions don’t leave a good reputation for things like this and can get people in trouble and put an end to it all.”

Robert Chabora, chair of the music department, also recalls some pranks-gone-bad in the past.

“At least on one occasion it went too far,” Chabora said. “The prank caused some inconveniences and damages in the building. That year, the humor disappeared. I hope that doesn’t happen again.”

Other pranks in the past have been much more successful. Chabora remembered instances of students covering the walls with staff photos, changing nameplates and rearranging furniture.

Anonymous One said that the goal for this year is to keep things positive and fun.

“I really wanted to make sure that the tradition continued in a positive light,” Anonymous One said. “All the seniors see it as a fun way to show the entire faculty and staff of the music building how much we have appreciated their tutelage over the past four years. It is mainly about showing appreciation.”

The seniors this year decided to carry on the tradition not only because of their appreciation for the music faculty, but also because it’s “simply a tradition,” said Anonymous Two. For music majors, who spend a lot of their time in classes together and in the music building just hanging out when they aren’t in class, friendships become very tight.

“I see it as a good-natured spoof of the culture here in Hvidsten, and I’m glad that students can find the time and energy to be playful at a time of some stress,” Chabora said.

In addition, Anonymous Two saw this as a way to show their legacy as seniors in a concrete way.
“I think another motivator could be a little bit of ownership. We spend all of our time in that building and we end up leaving a mark of some sort,” Anonymous Two said.

Both pranksters hoped that the tradition would continue in future years.

“It’s always fun to hear stories through the years and reminisce with friends about the silly things you did while in college,” Anonymous Two said.

“I think music kids always need more traditions,” Anonymous One said with a smile. “It is a great time for seniors to bond and spend some more time with each other as they prepare to leave Concordia. For many of us, this place is like a second home with great friends who are also family. The prank offers an opportunity to do something for the last time.”

While the pranksters wouldn’t expose when their prank is going to be pulled, they advised to keep checking back into Hvidsten.

“I can’t really go into much detail,” Anonymous One said. “But I can tell you that one of our main concerns with parts of the prank is how we are going to get it through the music building door…”