By: Riah Renee Roe
In: Letters, Opinions
With: 0 Comments 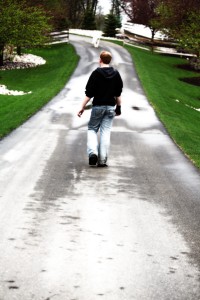 These words which may be a blessing for new parents can be a curse for a transgendered person. Sadly, gender is medicalized; someone in a white doctor’s coat points at you and says, “You have a penis therefore we are going to make you a man.” Or “You have a vagina; you shall be called woman.” Furthermore, heaven forbid a child is born with both sets of genitalia, it is necessary to correct the situation so that we can truly tell if this child should be treated like a boy or a girl.

As humans, we like to keep things simple. We weren’t really given a rulebook and so we make due the best we can. What happens when things do not go as planned? When, for instance, a person with a male body identifies as a female?

That is what happened in my case. When I was a child, I was diagnosed with gender identity disorder. In very laymen’s terms; I am a chick in a guy’s body. At age 14, I came out as a gay man. I was sexually attracted to men and I had a penis. Clearly, I was gay. However, I never had fulfilling relationships with gay men and I never actually “fit in” with the gay community. I came out as transgendered three weeks ago and have never been more at peace with my own identity in my life.

Coming to terms with this and the conflicts with my biology has made me look closer into a lot of theories: feminist theory, queer theory, gender theory. If there is one thing I’ve learned over the past few weeks, it is that everyone has an opinion but no one has an answer. The reason I say this is because I’ve found gender is socially constructed rather than a tangible object we can quantify.

Many people might say that it can’t be constructed because, if it is a construction, it doesn’t mean anything. However, I beg to differ; many social constructions (like gender) have very real ramifications and implications in our lives. Gender determines what we wear, how we act, and how we are perceived and received by others. Gender tells us what bathrooms to use, what products to buy and, until recently, who we are supposed to fall in love with.

Coming out as transgendered, my interests in feminism have increased in ways I’ve never imagined. What does it mean to be a feminist? Well, it depends on what wave you are riding. First-wave feminism was historically about upper-class women combating injustices that targeted them specifically, and there was not much concern about the injustices facing lower-class women. Second-wave feminism didn’t just work to increase the chances of opening social opportunities to women, but also worked to establish rights within the areas of reproduction, sexuality and change in their private lives. Third-wave feminism is predominantly the younger woman of today attempting to combat all sorts of injustices: education, economic status, age, race, sexual orientation and more.

After having read “The F word” last week, I had to ask myself if the author was giving a fair description of feminism. There was so much emphasis placed on the idea that a feminist can be feminine that it echoed the wide-spread belief that femininity had no place within the movement. I don’t believe this to be true at all, but I do have to ask why the author focused so much on appearance being the determining factor of a person’s femininity.

I’m a warm, redhead, transfemme genderqueer, traveler who enjoys photography, sarcasm, and fine wine (In Europe because I am not 21). I love watching cartoons in just an over sized t-shirt eating kill-a-diabetic cereal. Likewise, I often engage in ridiculous conversations about existentialism and objectivism. Of course during these conversations I will be wondering why the chai tea I am sipping is overpriced and I will also secretly be questioning why I never dropped out of college to become a stripper or bartender. Kay’s Jewelers commercials make me cry yet needles do not even make me flinch. I will do anything once and most things twice and I find sushi carousel pretty amusing.