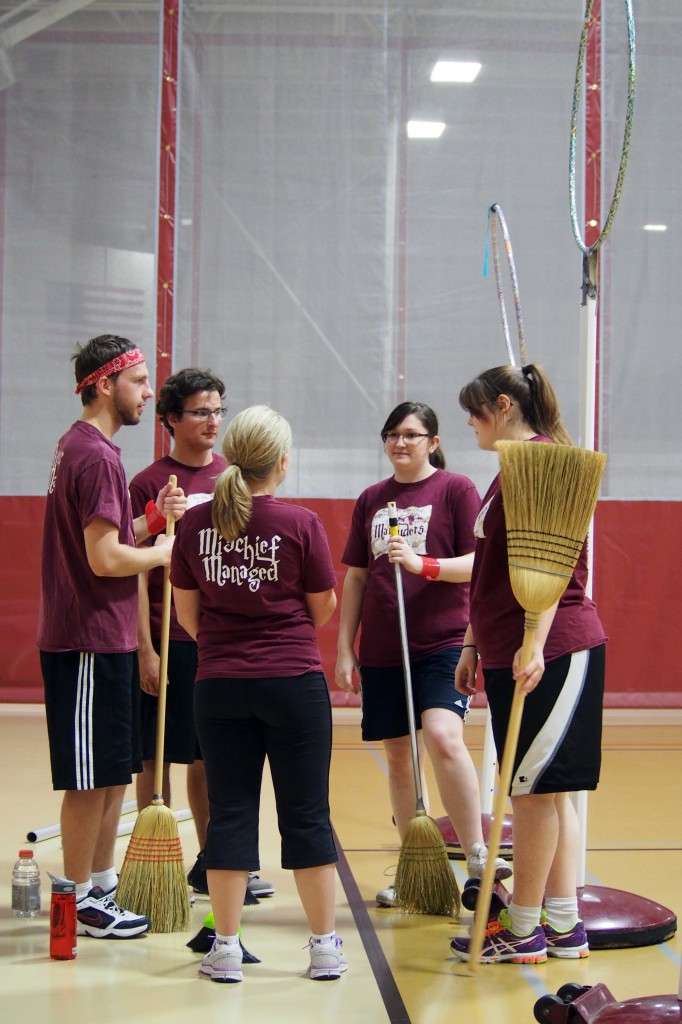 Every Sunday evening Olson Forum converts into a quidditch pitch. Yes, you heard that right; the game of quidditch is played on Concordia grounds.

Despite not having flying brooms at hand, senior Justin Rodeberg explained how Concordia students play the wizard’s sport very similarly to how it is portrayed in the Harry Potter books.

“Everyone has a broom and sneakers,” Rodeberg said. “We also have hoops, a quaffle (used for scoring purposes), dodge balls, and the snitch uses a flag-football-type belt to be identified.”

Senior Marie Ott said the roles the players take on are very similar to the ones described in the “Harry Potter” novels.

Rodeberg said the way the game is scored depends on the number of participants.

“Each goal gives a team 10 points, and when the snitch is caught the team gets 30 points,” Rodeberg said.

When deciding whom the snitch will be each game, Rodeberg said the selection varies.

“Normally someone who isn’t affiliated with a team signs up to be the snitch,” Rodeberg said. “Sometimes we have a snitch from each team and they take turns so we are not biased.”

Sophomore Jessi Schmit started playing quidditch as a freshman and is a goaltender, or keeper, for the Marauders.

“I have always liked Harry Potter and heard about it from a friend,” Schmit said. “I went to the first game and after trying different positions I became a keeper. “

Ott joined during her sophomore year at Concordia not only because she liked Harry Potter but also to get involved on campus.

“I thought it would be fun, and I wanted to meet other students,” Ott said. “It is also a low-commitment activity.”

One of Schmitt’s favorite parts about being involved in the quidditch club is how close the group is.

“The game can get competitive (but) there is no rivalry between the teams,” Schmit said. “It feels like we are all on one team.”

Rodeberg hopes students take part in Sunday night games despite not knowing how to play.

“It’s an easy game to learn and fun to play,” Rodeberg said.

Members of the quidditch team do not just play quidditch; Ott said the club hosts several other events throughout the year.

“We have Harry Potter movie nights,” Ott said. “There is also a banquet at the end of the year where we hand out awards and choose the new president of the club,”

Schmit mentioned that sometimes people in Olson Forum stop what they are doing to participate. During last week’s game, Schmit said some random students stopped working out to join in.

With the diverse group of students taking part in Sunday night quidditch games, you are able to meet a variety of students. Rodeberg hopes students looking for a good Sunday night activity come and give it a try.

“It is different than any other club on campus,” Rodeberg said.