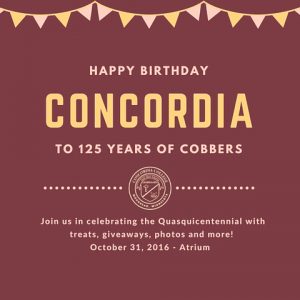 Oct. 31, 2016 marks the 125th anniversary of Concordia College and there are many events planned to take place throughout the year to celebrate this milestone in the history of the college.

“There’s a wide ranging series of events to celebrate the faith and the imagination and the courage of the founders 125 years ago,” said President William Craft.

On the actual anniversary date, Student Government Association will throw a “birthday party” for the college in the atrium.

SGA president Rachael Schauer said the “come when you can” type of celebration happening the entire day of the anniversary.

“We wanted to make it not only during a specific time,” Schauer said. “This way it allows people to stop by quick to the atrium. More people can have the opportunity to feel invested in it.”

She said the atrium will be decorated, people will be able to take photos at a photo booth, cake will be served and the Alumni and Advancement offices will be handing out Concordia-themed gifts such as temporary tattoos.

Later that day, students from sports, music ensembles and other student organizations will make the shape of “125” on the football field for an aerial photo.

To go along with the celebration, Schauer said SGA hopes to host a service day on Oct. 30 that focuses on helping refugees in the F-M community.

Chief of Staff Tracey Moorhead and a committee has put together a list of events they think will help celebrate the college throughout the entire year. They wanted to use some of the events Concordia already has in place to do this.

“We do so many good things on an annual schedule that we needed to take advantage of that,” Moorhead said. “Plus we wanted to pay tribute to the past but still look to the future.”

This year, Concordia will hold five President’s Seminars rather than the usual three or four. Three will feature a Concordia faculty member and include accomplished graduates of Concordia. The mentoring relationships between faculty and students at Concordia will be showcased.

The other two President’s Seminars will feature nationally recognized people external from the college.

On Nov. 10 Dr. Carol Geary Schneider, president emerita of the Association of American Colleges and Universities will lead the President’s Seminar. She is one of the most prominent advocates for the liberal arts, said Craft.

On Feb. 9 David Brooks, New York Times columnist and author will lead a President’s Seminar about Concordia’s role as a liberal arts college of the church.

Another project that will be taking place this year is Concordia Stories, which is inspired by StoryCorps. Audio recordings will be collected from alumni, current students and future students.

Dr. Greg Carlson, director of film studies and media activities will be working along with students to record short clips that capture the stories of people associated with Concordia.

“We’re trying to have Concordia reside at the heart of the conversation,” Carlson said.

They will be collecting the stories publicly during homecoming and also already created some recordings over family weekend. These require no appointment.

“They’re stories that we don’t get otherwise,” Moorhead said. “We need to have them in the archives so we can enjoy them.”

Recording the stories will add many more Concordia-related memories to the archives of the college for people to cherish and enjoy.

“There are almost limitless stories of alums that we’re hoping to gather,” Craft said.

They will be seeking out stories from some certain individuals as well, and Carlson would be happy to set up an appointment to record with anyone who wishes to throughout the year.

“In one sense it’s the kind of thing you could do any year,” Carlson said. “Our expectation is not that these interviews will try to make grand, broad, overarching statements about the philosophy of what Concordia means. We expect they will speak to the highly personal, the very specific.”

The clips will be put into digital format, and Carlson said they plan to upload them onto Soundcloud and link that to the Concordia website.

“People can go and at their leisure can listen to different stories from different people,” Carlson said.

The first Concordia Stories could be available online as soon as the end of this semester.

These events, and many more that can be found on pamphlets around campus will help to celebrate the 125th year of Concordia College.