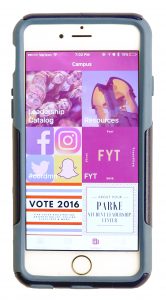 Over a year ago, a conversation began about creating a Concordia mobile app for students. On Aug. 10 of this year, that conversation became a reality as the ConcoLife app went live.

“There’s this reality that students are on their phones,” Rinehardt said. “Printing orientation schedules is not sustainable or current.”

The app gained funding from the student engagement and orientation budget, and a contract was signed. The months of May, June and July were spent developing the app through a company called Legit Apps. Johnson said the app’s main function is to inform students about campus events and schedules and show ways to get more involved.

Having everything in one place adds a convenience factor for students, though the app itself is broken into four sections titled Line Up, Map, Campus and My Schedule.

“Before the app, there wasn’t an effective way for students to go to one place and see everything that’s going on,” Johnson said.

Another example of how the app can benefit students is a tile designed by Kemp that shows students how to register to vote. This feature will remain on the app until after the election.

SGA is looking forward to being able to use the app to inform students about events and initiatives they are working on, Kemp said.

Another tile which Rinehardt and Johnson are both excited about is the Leadership Catalog which is a place where students learn about leadership opportunities on campus.

Johnson said the app has been highly successful with more than 1450 downloads.

“Every single day we get more downloads,” Johnson said. “We’re excited about those numbers.”

However, many of these downloads are freshman students who were introduced to the app during orientation week. Since the app is new and is something upperclassmen are not used to having yet, it may be a while before everyone on campus is using it.

“With anything, it’ll take time for students to view it as a tool they want to use,” Rinehardt said.

Despite the use, the app has had its issues — particularly in the Android version which has been found to run less smoothly than the IOS version.

Currently there are 324 Android users that have downloaded the app compared to 1135 iPhone users.

“The android version isn’t up to snuff and we know that. They’ve assured us they’re really digging into those kinds of issues,” Johnson said. “I’m hopeful that the android version will mirror the apple version by mid-year.”

Although there is not a definitive date when the app will be fixed, Android users can expect to see changes in their app within the next few months.

Despite this, the app was well received, said Pieters.

A survey sent out to freshmen revealed that approximately 92 percent of them downloaded the app and about 80 percent used it during orientation.

“There was a general sense of liking it,” Pieters said. “They like the look of it, the ease of use and that everything’s in one spot.”

For next year Pieters hopes to create a function so that freshmen can click on their club and get a schedule of events specific to that club.

Currently the contract Concordia signed says only orientation, student engagement and residence life can have events in the app, though in the future both Johnson and Rinehardt hope to create more partnerships around campus so they can appear in the app. There are hopes to include activities and groups such as music ensembles, athletics, theatre and symposium events in the future.

“We’re really excited about where this could go,” Johnson said.