Donald J. Trump was elected as President of the United States of America, but there are still a few things holding him back. In addition to the re-energized activists who will fight against his inexcusable policies and fear mongering, one of the biggest challenges Trump will face is accepting his true identity as a blobfish.

It may seem like there is no way this man could be the same creature that lives several thousand feet underwater, so in order to discover the truth, the well-paid staff of The Concordian took a trip to the bottom of the ocean to investigate further. Here is what we learned: 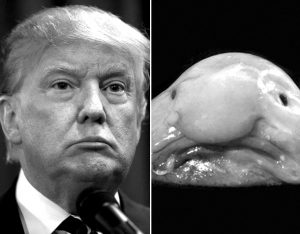 As it turns out, Trump actually lives much, much deeper under the earth. We’re talking so deep. The deepest you’ve seen. No one has seen anywhere deeper.

Then again, maybe it’s just us. Maybe we’re all just in too deep.

Just as blobfish look physically different under the weight of the water, Trump also looks different under pressure. Not only can he change physically, but also in other ways, such as his consistent flip-flopping on stances. Trump is like a box of chocolates. You never know what you’ll get, but you do know that it will always taste bad. (Note: Just like all fish. Bleh).

Blobfish are not generally eaten, however, and are therefore worth very little on the fish market. As it turns out, neither is Trump—just ask the stock markets.

Another similarity is that both the blobfish and our future president lack a significant amount of muscle. The fish uses this to save energy by waiting for prey to swim by before devouring them whole. Similarly, Trump waits for vulnerable targets such as females, people of color, LGBTQ+ folks and more to enter into his periphery before pouncing. If it works for the blobfish, it works for Trump. Life is much easier when things are handed to you.

Both were voted the “world’s ugliest animal.” Regardless of what you think of Trump’s comb over, it looks like his heart makes him the true winner of this award. Don’t believe me? Check out his university, his housing discrimination, his sexual assault allegations or pretty much anything else he is proud of.

Like Trump, blobfish have tiny hands. In fact, they’re so small, you probably won’t be able to find them on the fish. We tried, trust me.

Both creatures are also generally pretty salty. It’s hard to measure the true saline concentration, but it is easy to see how absorbed Trump is in himself.

Scientists know very little else about blobfish, as the animals are endangered and live in the depths of the ocean. Similarly, political scientists have a hard time understanding anything else about Trump, because they lack any evidence of truth behind his words.

Nobody would expect either to win the presidency. And yet, here we are: Trump as president in January, blobfish for president in 2020. Here’s to a fishy future.