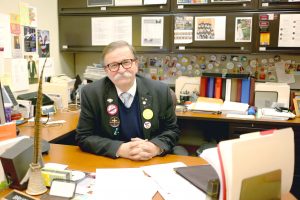 “I’ve been known to change my mind,” Vieweg said.

Vieweg made the counter-announcement Monday on Facebook, claiming: “the summer of 2017. I’ve determined that the time simply isn’t right . . . there is no magic in the number 70” Originally,Vieweg planned to leave the college upon turning 70, following the 2017 Spring semester. His new tentative plan is to remain employed until December 2018 at the latest, but he considers the date “just a placeholder.”

He said his decision to continue working was a matter of poor timing — he could easily retire, but sees no real reason to do so and simply enjoys the work. Upon asking the administration if he could stay on, there were no objections.

“I absolutely love what I do here,” he said. “There are things that I can do. I can keep up with most folks around here.”

Vieweg said he’s aware that he could be replaced by someone new, but that person might lack some of the long-held relationships he’s developed from his ten years of employment.

“Nobody did want me to go, and that’s a nice place to be,” he said. “So unless they’d like to get rid of me, I’d like to stick around.”