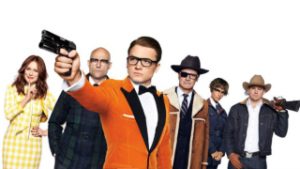 “Kingsman: The Golden Circle” is a change of cinematic pace, as recent weeks have seen horror or thriller films lead the box office. The equally trigger-happy sequel to “Kingsman: The Secret Service,” follows suit of being a sub-par, more grisly version of the John Wick franchise, which has seen much more success. Despite having a cast of many Academy Award winners and nominees and an experienced directing and writing pair, the film does not reach its full potential as a modernized James Bond adventure.

“Kingsman: The Golden Circle,” directed by Matthew Vaughn, takes elements from classic Bond films and his previous directorial work, namely “Kick-Ass,” and combines them in a way that is unnecessarily gruesome at times and was uncomfortable for the full-house audience at Marcus Century Cinema. Very quickly, Poppy (Julianne Moore), the leader of the drug cartel dubbed “The Golden Circle,” sends a henchman through a meat grinder, and then turns him into a hamburger to serve to people who visit her diner. Unfortunately, this is not the only time the meat grinder is used, and is not the only instance where “Kingsman: The Golden Circle” is cringe-worthy in the ways it deals with the death of characters.

The film opens with Gary “Eggsy” Unwin (Taron Egerton) seeing almost all of Kingsman killed after their database is hacked, leaving him and only one other member of the Kingsman organization, Merlin (Mark Strong), left to find out who killed their friends and family and exact their revenge. This brings them to the United States to join the ranks of the Statesmen, the United States-based affiliate of Kingsman. While the members of Kingsman are named after the many knights of the round table, the Statesmen are named after alcoholic drinks, including Whiskey, Tequila, and Champagne. This group works against Poppy, who has poisoned all drug users across the world in order to coerce the President of the United States (Bruce Greenwood) and the United Nations into legalizing the use of all drugs: marijuana, cocaine, heroin and all other hard drugs included.

A majority of the action takes place in the first and last ten minutes of the film with only a couple of bursts in between, some of which are quite technically flawed. At one point, Whiskey (Pedro Pascal), wields two six-shot revolvers, but shoots over 20 bullets before reloading. Between this and other technical flaws, the few long action scenes the film has hold back the potential for it to be on par with other spy and action movies of today. Many of the flawed scenes occur quickly in the film, and introduce the film poorly. Towards the ending few sequences, stunts are managed more effectively, and in the third act the movie is much more succinct.

Amidst technical ambiguity, the film manages to create some meaningful connections and have some political undertones powerful in society today. The relationships between Eggsy and the remaining agents of Kingsman show that he thinks of them as family, which he is lacking. This “family” of sorts also includes his girlfriend, Princess Tilde (Hanna Alström), the princess of Sweden. All of these relationships have grown in the time between the first and second films, and provide a heartfelt quality between the killing and action. John Denver’s “Take Me Home, Country Roads” plays an important role in the film, showing a strong connection of life and loss as the story progresses, as it follows Kingsman to the United States, the demise of one of the secret agents, and eventually the conclusion of the film. Poppy’s drive to decriminalize and legalize drugs in the film, as well as many other things she stands for, are points of disagreement in politics today, notably the debate to legalize marijuana across the United States. It is clear that on the issues depicted on screen, the President takes a conservative approach, calling for the incarceration or death of all drug users, and Poppy and the Kingsman organization take a more liberal approach to the political arguments that are mentioned.

Vaughn, who co-wrote the script with Jane Goldman, manages to weave many narratives in subtly, leaving the audience to consider what is happening in the real world, and how it is similar and dissimilar to the world on screen. Ultimately, “Kingsman: The Golden Circle” manages to humanize all sides of the table in the war on drugs, and that humanity is something to be taken away from the movie. “Kingsman: The Golden Circle,” while crude, is another great installment in the budding franchise that entertains.

When Strong, who plays Merlin, said: “This movie will be to Bond, what “Kick-Ass” is to superhero movies,” he could not have found a better comparison. Vaughn has now turned both the superhero and super spy genres into comedic, crude adaptations, and does so in a unique way. Based on the opening weekend success of “Kingsman: The Golden Circle,” fans and critics alike can expect a third installment in 2019 or 2020. Hopefully Vaughn and Goldman can clean up inconsistencies and deliver a more succinct film that appeals to a broader audience.