By: Rachel Hauschildt
In: Art, Theatre, Variety
With: 0 Comments

Coming to the Frances Frazier Comstock Theatre, Feb. 17 through the 20, the Concordia College Theater Department is putting on a production of a drama called, “Third”. This play was written by Wendy Wasserstein and will be directed by David Wintersteen, director of the theater department. Instead, it is set in an unnamed liberal arts college on the East Coast.

It seems this play is pushing for transparency in our assumptions and opening the gap for a conversation, not only about how we view others, but also about how our viewpoints allow us to interact with others with those different political perspectives.

“I think this is one of the most uniformly talented casts I had. Everyone is really operating on a high-level, they are all very focused on dedicated actors,” said Wintersteen. He has been directing productions for the last 25 years.

He said he chose “Third” because of the strong female characters, and because Wendy Wasserstein, the playwright, won a Pulitzer Prize for the play.

“We thought the play itself was speaking to conflicts we are seeing in our society right now in terms of liberal and conservative forces and how we talk with each other, how we are in  relationships with each other,” said Wintersteen.

This drama unfolds the story of Laurie Jameson and a student nicknamed Third. Jameson, a progessive English professor who specializes in Shakespeare, thinks that her student was cheating on an essay about “King Lear.” Heightening the tension, political beliefs and assumptions are brought into light and challenged by the decisions that a more liberal-leaning Laurie makes about her presumed conservative student, Third.

Lizzi Ortmeier, playing Jameson, said “Laurie is a very conflicted character. At the end of the day, she is a good person, but she definitely makes mistakes and she is as stressed and confused by and done with her current events as we are with ours. I really value what a complex character all of the characters are, but especially how Laurie is.” 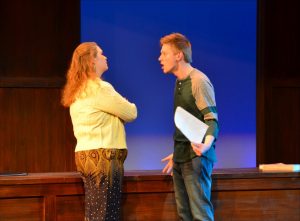 Jameson is complex and imperfect. Ortmeier said, “Even when you are passionate about doing something that you feel that is right and just and you are fighting on team good – the team of the people that care about people – even if you strongly believe that you are doing that, you can make mistakes.”

A costume to look out for is what Ortmeier describes as a “beautiful” orange coat paired with a rainbow scarf that she said reminds her of something everyone’s mom would wear in the mid 2000s. She adores that the red skirt, which is paired with the orange coat, has pockets.

Carlos O’Ryan is playing Jack, Laurie’s father. His favorite scene is when he is just having a sonder moment with Laurie later on in the play.

Ortmeier said,“I think that people should come to this play with an open mind and space to see themselves and people that they love and people they disagree with represented on stage.”