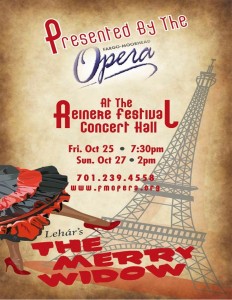 Last weekend I was able to cross something off my college bucket list: attend a production by the FM Opera.  I saw it as a not-to-be-missed event, since about half of Concordia’s music faculty, along with several of my friends, was involved in the show.  Not having been to an opera before, I was a little intimidated by the idea of it but I don’t think I could asked for a better first opera experience than that offered by Franz Lehár’s The Merry Widow.

I was most surprised by two things: that the whole show was in English and that the plot was fairly modern.  At the opening of the show, Hanna Glawari, the eponymous merry widow, has just recently been widowed and left a sum of 20 billion francs.  While on vacation in Paris, she finds herself being wooed by many men who hope to get hold of her fortune.  News of this reaches the embassy of Pontevedro, Hanna’s home country, and the ambassador decided to trick her into marrying another Pontevedrian in order to keep her fortune in the country.  He chooses to set Hanna up with Count Danilo Danilovitch, who, unbeknownst to the ambassador, was in love with Hanna prior to her wedding, but was unable to marry her due to her inferior social position.  Though it is clear that they still love each other, Danilo refuses to court Hanna so as not to seem like a fortune hunter.  What follows is hilarity appropriate for a modern day romantic comedy, including love triangles, bumbling henchmen, and an assistant who’s smarter than the boss.

The lead actors were all fabulous, as expected.  Stella Zambalis, the actress who plays Hanna, had a full page of the program just listing her past performances, including performances with opera companies from all over the country.  She and David Hamilton had great on-stage chemistry, and they portrayed reluctant lovers incredibly well.  For example, there was a scene in which Danilo tells a story of an unfaithful princess, and his body language is so telling of his true feelings.

I’d like to give a big hand to all the Cobbers who were involved with The Merry Widow: Elsa Lund, Chris Kenney, Victoria Richmond, Bobby Person, Amanda Habner Andrew Alness, Brianna Anderson, Rachael Cammarn, Megan Donovan, Victoria Erickson, Jeremie Burr, Kyle Lippert, and Gabriel Walker.  Of these many Cobbers, I’d like to give a special shout out to Andrew Alness, who played Njegus, the secretary to the ambassador.  He stole the show with his ostentatious, affected accent that was somewhere in between French and British.  His walk had an exaggerated bounce to it which added great humor to his letter-reading.

I will grant you, this was a really cheesy show, very rom-com if you will.  I’ve always been a fan of cheesy comedy, but if that isn’t your thing this show may not have been for you.

If you missed this show, there is another opportunity in the spring to witness a world premiere of Buried Alive and Embedded, both of which were inspired by the writing of Edgar Allan Poe, which promises considerably less cheese than The Merry Widow.  Student rush tickets are only five dollars and it’s a great excuse to get dressed up for an evening out.  If you get a chance to see the FM Opera’s next performance, I would highly recommend doing so.  I promise you will have a great time.