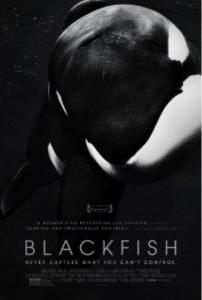 If you’ve ever visited SeaWorld, you will probably remember the image of giant, majestic orcas splashing and cavorting with a playful grace. But do you also recall the news story from 2010, when SeaWorld trainer Dawn Brancheau was killed by 12,000-pound killer whale Tilikum? Blackfish, a new documentary by director Gabriela Cowperthwaite, dissects the lives of killer whales in captivity and calls into question the practices of corporations such as SeaWorld.

The film focuses on the life of killer whale Tilikum, who was captured in the wild at the age of 2, and in his 25 years of performances at sea-themed amusement parks, has taken the lives of two of his trainers. Released in the UK in July of 2013, Blackfish has been the catalyst for a wave of backlash against the SeaWorld corporation, which is accused of subjecting its orcas to inhumane living conditions, including small pool enclosures, isolation from fellow whales, and rampant bullying from the female orcas, all leading to frustration and potential violence. But more than targeting SeaWorld itself, Blackfish is truly a protest against all forms of

captivity. Such acts of violence as what happened to Dawn Brancheau are the acts of creatures victimized and driven insane by lifelong imprisonment in institutions such as SeaWorld.

Blackfish draws from a multitude of different sources, including courtroom transcripts, neuroscience research, clips from SeaWorld commercials, and the raw, shocking footage of several different orca attacks. One source that is quite notably missing is SeaWorld itself, which repeatedly declined to be interviewed.

While dissent and dispute continues to circulate around the realities of SeaWorld’s orcas, Blackfish raises many interesting questions about the ethics of captivity, questions that deserve attention and discussion. Blackfish invites us to wonder if there is a way to reconcile our desire for entertainment and beauty with our responsibility to respect our fellow creatures. Its conclusion provides a stark contrast between images of free orcas frolicking in the open ocean and the ominous statement, “Tilikum remains at SeaWorld Orlando, performing daily.” It is clear which of these realities is preferable. As the subtitle from the film’s poster suggests, “Never capture what you can’t control.”