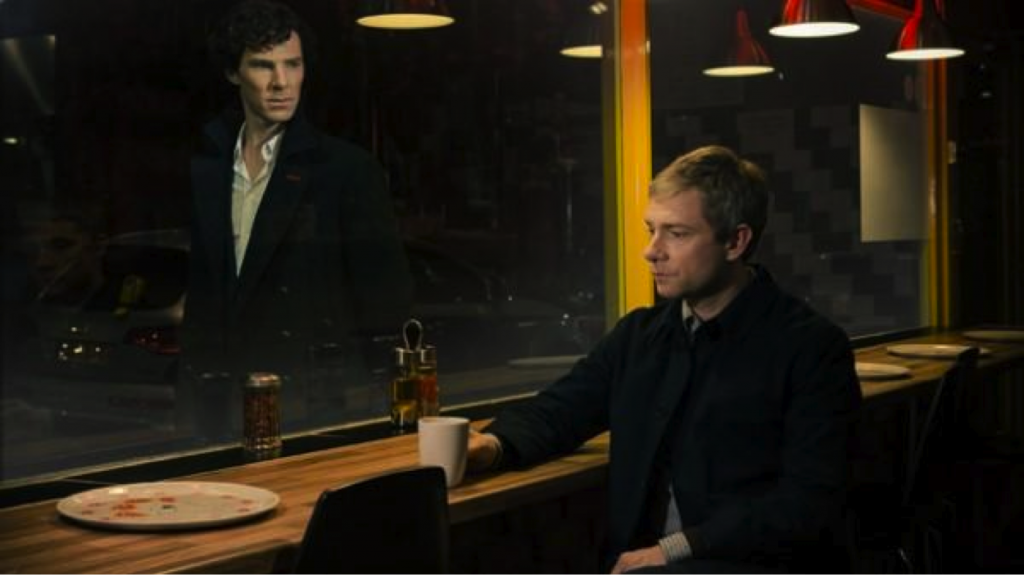 For the first time in two years, fans of the BBC drama series Sherlock have had reason to rejoice.  The third season of the show, a modern-day retelling of Sir Arthur Conan Doyle’s Sherlock Holmes, premiered in the UK on New Year’s Day, following a two-year hiatus.  After the second season ended on a huge cliffhanger, the new season generated huge excitement – with about 9.2 million viewers watching the first episode.

The question on everyone’s mind was, of course, how Sherlock survived his supposedly-fatal fall from the roof of the hospital.  An answer is given within the first five minutes of “The Empty Hearse,” only to be revealed as a joke.  Several more joke explanations are offered but the question is never completely answered, which left viewers wondering if writer Mark Gatiss was intentionally toying with fans’ expectations.  As in previous seasons, Benedict Cumberbatch and Martin Freeman (playing Sherlock and John respectively) have fabulous on-screen chemistry, but Sherlock and John have a very different relationship in season three.  John has clearly not gotten over Sherlock’s apparent death, but he has attempted to move on and start a new life.  Sherlock however, has been busy doing what Sherlock does best – solving crimes and thwarting evil plans – and he reemerges as the same lovable sociopath he has always been.  While this isn’t surprising – it is Sherlock Holmes after all – it did seem a little bit unrealistic.

The first episode of the season, “The Empty Hearse” is set two years after “The Reichenbach Fall,” the final episode of season 2.  Sherlock has been away from London during that time, but is called back by his brother Mycroft to help stop a planned terrorist attack in London.  However, at the forefront of the episode is the rebuilding of Sherlock’s relationship with John, who has begun to move on and start a new life following Sherlock’s apparent death.  We meet John’s fiancée Mary Morstan, played by Martin Freeman’s real-life partner, Amanda Abbington.  Not surprisingly, their on-screen chemistry is fabulous.  Abbington brings a wonderful addition to the cast as Mary.  Mary’s personality falls at the exact midpoint between Sherlock and John and it was fascinating to watch her develop a relationship with both of them.

The second episode of the season, “The Sign of Three” was released just four days later.  The main action of this episode centers on John and Mary’s wedding and Sherlock’s best man speech in particular. Because it’s Sherlock, there is an attempted murder case to solve. In the middle of John’s wedding.  Within the episode however, the case takes a backseat to the loads of character development we see from Sherlock and John.  Over the course of the speech, the audience relives the whole progression of their relationship from partners to best friends.  It’s a little bit cheesy but it’s presented in such a way that it’s also hilarious.  Arguably the funniest scene in the series so far happens in this episode during a flashback to John’s “stag night” (bachelor party) in which Sherlock attempts to solve a case while completely smashed.  While this episode has a completely different plot arc from anything we have seen thus far, “The Sign of Three” is my favorite episode of season 3.

The final episode of the season, “His Last Vow,” was pretty intense.  I won’t give too much away but there are twist and turns every couple of minutes in this episode.  We meet the villain, Charles Augustus Magnussen, who is quite possibly even more evil than Moriarty.  Sherlock describes him as “the Napoleon of blackmail.” Magnussen seems to know everything about everyone, including their weaknesses.  When Sherlock, John, and Mary inadvertently get involved with Magnusen all kinds of chaos ensues.  “His Last Vow” is emotional and intense.  And it ends with, you guessed it, another huge cliffhanger.

As a long time fan of both Gatiss and Moffat’s writing, I loved this season of Sherlock, and I am very excited to see where the next season takes my favorite detective and his blogger.  Hopefully we won’t have to wait another two years for answers.

If you haven’t caught up on season three yet, you can watch “The Sign of Three” this Sunday on PBS.