The Age of Stupid 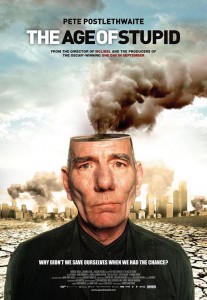 This spring break I travelled on the High Impact Leadership Trip (HILT) to the Everglades in Florida. We learned about water issues concerning the state and climate change that concerns the entire world. One night we watched a film entitled, “The Age of Stupid.” The film is both a documentary and drama that has projected our future world in the year 2055, with only one man left living on the planet due to the devastating effects of climate change. While this film was created in 2009, the issue of climate change is even more important in 2014, and it does an incredible job of highlighting the imminent threat of climate change.

“The Age of Stupid” is a compilation of real footage from 1950 to 2008 that explicitly shows how climate change will be the force to end the world. While this end has not yet come, the main character, played by Pete Postlethwaite, is compiling these examples as a cautionary tale for whoever might come across the film, and the rest of “The Global Archive”—the station holding all of the Earth’s information and discoveries after its demise.

The movie follows six different narratives of people who are either effecting or affected by climate change. It is different from the myriad of documentaries available regarding the environment, because it looks through climate change from the lens of someone who has already been affected by it, and shows different perspectives through its archived footage. From a paleontologist working for Shell Oil, to a Nigerian woman being exploited by Shell Oil’s presence in her country, to a wind farm developer in England, this documentary gives a comprehensive look at climate change and illustrates in an innovative way why it is important.

It is so easy to walk away from a documentary discussing an issue of such magnitude feeling absolutely helpless, but instead, “The Age of Stupid” is eye-opening and invigorating. It is sure to reignite the importance of climate change, and it is well-worth the watch.