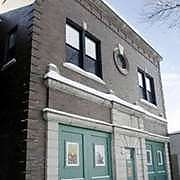 One century ago and not far away, Fargo built its second fire station at 916 Main Avenue. Since its decommissioning, the firehouse has played host to a variety of establishments – boxing training, a soup kitchen, a Native American cultural center. Little did it know that one day, 916 Main Ave would become the home of the cosmopolitan oasis, the pulsating aorta of Fargo-Moorhead’s arts scene: the Red Raven Espresso Parlor.

Worker-owned and operated, this endearingly eccentric coffee shop has been open for 7 years, serving as a cradle for budding local artists. Its original owners were musicians themselves, but Red Raven provides an outlet for artistic expression in its many forms: music, visual art, spoken word poetry, comedy, and rich conversation. The Maker’s Market, held on the first Saturday of every month, showcases locally created items, from artwork to jams and jellies. Another event, organized and emceed by two Fargo teens, is the monthly Spoken Word Poetry, which was recently featured in the Fargo Forum.

I stumbled across Red Raven on a cold Saturday evening in January during the performance of a band called Go Murphy. The skinny, high-ceilinged room was packed with cheering fans, many of whom knew every word in the indie rock band’s fantastic set. Go Murphy is the poster child for the rich local artistry that Red Raven seeks to discover and nurture; modest beginnings for their now-national success.

Performances at the Red Raven are unique; there is usually no cover charge and no age limits. Many local bands play at bars, but the Red Raven is an all-ages experience. Its diversity of artistic performances ensures an ever-changing variety of visitors and audience members. It’s also richly tied to the community, serving as a venue not just for local artists but for events such as the “Art in Action” fundraiser for the Fargo-Moorhead Community Bike Workshop.

During non-performance times, the Red Raven is a great place to grab a coffee, a fruit & curry chickpea sandwich, a vegan cookie, or a cuppa from their extensive tea selection. Enjoy your drinks out of an eclectic assortment of mugs, and peruse the stack of board games, the $1 used bookshelves, the rotating art exhibit featuring local artists, or the free box from which many a strange and unique item can be found. In the warmer months, wander out to their famed courtyard to catch some well-deserved rays among a menagerie of potted plants.

Red Raven is only one facet of what’s going on at 916 Main Ave. Nestled in the basement is Seagrave Studios, owned by local artists whose art can sometimes be found on the brick walls of the espresso parlor. The former fire station is also home to the Stationhouse, a living cooperative made up of four tenants, with the goal of allowing Red Raven and Seagrave owners to live together, pooling resources and minimizing waste.

Red Raven Espresso Parlor is a delicious hybrid of Portlandia-esque urbanity and Midwestern hospitality. A lovely place to drink espresso or to “espresso” yourself. Check out their website for a full event calendar, menu, and other fun stuff.

2014-03-11
Previous Post: The Vox of the people
Next Post: Climate change: Why it’s real and why it matters