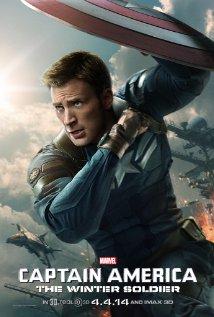 Going to Captain America: The Winter Solider was something of an adventure.  Its release just happened to fall on a $5 Student Thursday at West Acres Cinema, so virtually every student in Fargo/Moorhead was there, and in line ahead of me!  Once I finally got my ticket – for a showing an hour later than I had planned – I stood in a different line to get into the theater and had some fun geeking out with other Marvel nerds, most of whom were decked out in Avengers gear.  Needless to say, the hype the film generated was huge!

Unlike recent Marvel films, The Winter Soldier does not focus on the aftermath of the events of The Avengers.  This was far more character centered, and serves more as a sequel to Captain America: The First Avenger, than as a sequel to The Avengers.  Central to the plot is Steve Rodgers struggle to deal with being “a man out of time” while also trying to incorporate himself into the 21st century.  He keeps a notebook of things he’s missed that he needs to catch up on, including I Love Lucy, the moon landing, Star Wars, and Nirvana.  However, everything is put on hold when an old enemy, Hydra, infiltrates S.H.I.E.L.D. and puts a plan into motion to take down anyone who stands in the way of their new world order. Rodgers teams up with Agent Natasha Romanoff, Maria Hill, and a new friend, Sam Wilson in order to take on Hydra.  However, in order to get to Hydra, they find themselves up against The Winter Soldier, a legendary Soviet super-assassin.

One thing I loved about this film was that it gave a little more back story on Agent Romanoff and Nick Fury.  They both appear in The Avengers, but we learn very little about them.  Nick Fury’s back story is really interesting and full of political drama.   We learn how he started at S.H.I.E.L.D. and a little bit about the nature of his relationship with the World Safety Council.  His colorful past did nothing to lessen his image as a BAMF.  On the other hand, we learn only a few anecdotal details about Natasha.  They were fascinating, but they only made me want a Black Widow/Hawkeye movie set pre-Avengers that much more.

Chris Evans and Scarlett Johansson have a weird chemistry in this film, but it definitely works.  Steve Rodgers and Natasha Romanoff are very different characters, and that conflict can be hilariously awkward at times, especially in one scene where they must convince a group of people that they are a couple.  Natasha is very practical and emotionless about it, whereas Steve just looks incredibly awkward.  That scene alone was probably worth the price of a movie ticket.  The only thing that bothered me about Johansson’s performance as a whole is that she tends to deliver her lines in a very deadpan way.  While that works for her character, she sometimes comes across as being bored.

Because this is a Marvel movie, there is a huge plot twist near the end of the film that sets up a sequel very nicely, though whether that cliffhanger will be resolved in Avengers: Age of Ultron (expected release summer 2015), or in a future Captain America film I couldn’t say.  Age of Ultron is the next time we will see the Avengers united again, and a post credit scene in The Winter Soldier gave away one detail that made me question some of the info we’ve received about the next installment in the Avengers saga.

I would recommend The Winter Soldier to anyone who is interested in the Marvel franchise or in superhero films in general.  However, like any sequel, there is a certain amount of assumed prior knowledge going into the film.  If you haven’t seen the first Captain America film or The Avengers, I’d recommend doing so before seeing The Winter Soldier.