By: Sage Larson
In: Campus, News
Tagged: ITS, news, Printing, Uniprint
With: 0 Comments 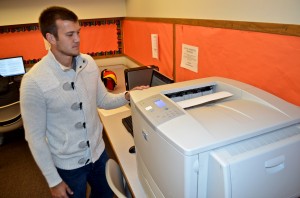 Sighs and groans rise from behind laptops as students grumble about having to sign into a new computer to send their paper to the printer, a luxury they took for granted with the old printing system.

Concordia has required students to upgrade to a newer version of Uniprint to be more compatible with the updated computer software, but the new program has caused issues for students with Windows laptops.

Luke Papenfuss, assistant student manager of ITS Solution Center, explained the need to change to the newer system.

“We were running a really old version of Uniprint,” Papenfuss said, “technically, the old version we were running didn’t even support Windows 7, as well as a number of the newer versions of the Mac operating system.”

Unfortunately, that did not happen. The new system works fine for Mac users, but many Windows users cannot download the system. Sophomores and PC users Jessica Mooberry and Kayla Long Voelkner have had issues since the beginning.

“I can’t print,” Mooberry said, “I have a little 32 gigabyte HP Notebook, so when I tried to download the program, it told me that I need a computer with at least 64 gigabytes. The old system worked fine with my computer.”

“I’m frustrated,” Long Voelkner said, “it takes a lot more time now to print, and I don’t have that time.”

ITS has tried everything they could to solve the issue, but they could not find a solution, according to Papenfuss.

Concordia uses Uniprint because it allows students to print with confidentiality. Instead of sending documents right to the printer, students have to log in and then print their document — for example — making it safer for private information such as medical records.

ITS has been in contact with Uniprint, showing them exactly what the issue is by purposely breaking one of their computers so it would mirror the issues PC laptops have been having. The staff from Uniprint remoted in to see what was going wrong.

“They’re looking into it,” Papenfuss said. “But until they actually fix it, there’s nothing [ITS] can do, unfortunately.”

ITS does not know when Uniprint will have the issue resolved.

For now, Papenfuss suggests to utilize a flash drive or Google Drive. Emailing oneself then signing onto a school computer works as well.

Another reason the campus updated their printing software was to bring awareness to students to see how much they are printing, as well as for ITS to keep track of students printing records. At the beginning of the semester, students are given $100.00 of printing money. Each sheet of paper costs $0.05, resulting in 2,000 sheets of paper students can print per semester. If a student needs to print more than their limit, they can go beyond it, according to Papenfuss.

“We chose 2,000 because it’s a ridiculously high number. No one should have to print over that limit,” Papenfuss said.