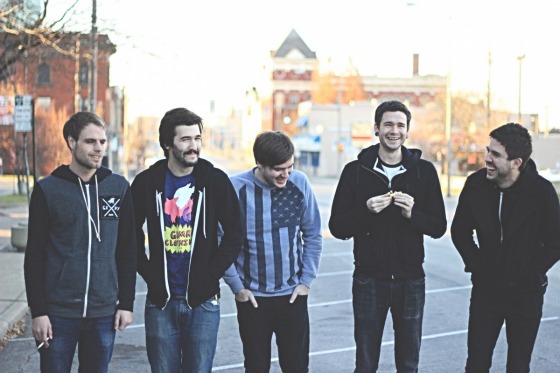 Almost every single person who showed up at The Garage in Burnsville Tuesday October 28 had the persona of pop punk surrounding them. It makes sense with Real Friends as the headliner and Neck Deep, Cruel Hand, and Have Mercy as supporters. The only thing missing was Real Friends taking a pizza break on stage. The Garage even sells pizza. What’s more pop punk than that? According to pop punk culture, nothing.

Chicago punk rockers, Real Friends, is one of the newest rockers to get noticed. Within the last year they have signed to Fearless Records, put out their debut album Maybe This Place is the Same and We’re Just Changing, and performed on the Vans Warped Tour all summer. Now they are making their way around the US on their headlining tour. Their stop at the soon-to-be nonprofit venue, The Garage, proved that these guys have what it takes to become the next generation’s punk rock band and to push the sound in a new direction.

Have Mercy opened the show and had a good amount of fans singing along. They have a classic rock quality to their sound but were trying a little too hard to be entertaining and funny on stage. At one point they were pimping out their guitar tech, Eli, to the women in the crowd. The women had no response to their offer. I have to give credit to Have Mercy’s beards because they are worthy of being featured on the Facebook page Incredibeard, a page dedicated to the most noteworthy and creative beards out there.

The second band to hit the stage was Cruel Hand, who have an old school hardcore sound similar to NOFX; however the crowd was more interesting to watch than Cruel Hand. The “mosh” pit  varied from band to band. During Cruel Hand’s set the pit opened up almost immediately and three to seven guys at once would begin punching the air, jumping up into air splits, and kicking their legs like they actually wanted to hit someone. I couldn’t look away because I was too interested in their “moshing” moves and the black light made them look like they were moshing at a bowling alley on cosmic bowl night. At one point someone got kicked in the face and shrugged it off. That must be hardcore punk rock.

British band Neck Deep got the crowd into the right mood. This group of five guys performs like many other punk rock bands. They’re up on stage jumping around getting the entire crowd to jump along with them, which is safer and more enjoyable for the entire crowd. The atmosphere Real Friends created with their performance was like punk rock on steroids. The crowd kept it simply with jumping and crowd surfing. Classic concert etiquette will never go out of style.

Lead singer Dan Lambton is the most awkward yet likable performer. He moves back and forth on stage, microphone in hand and delivers bassist Kyle Fasel’s lyrics with grit and strength. Lambton and Fasel’s dynamic is similar to Patrick Stump and Pete Wentz from Fall Out Boy. Fasel takes care of the lyrics, like Wentz, and Lambton takes care of the melody, like Stump. It’s a relationship proven to work. During the show they stopped the music to have a couple voice overs before the next song started. These gave more insight into the meaning of a song. Their set list went through their newest album to their first EP. It was a great variety but they could have spaced out the slower songs instead of playing them all at once in the middle of their set; however, it was an all around solid concert experience. The only thing missing was free pizza.