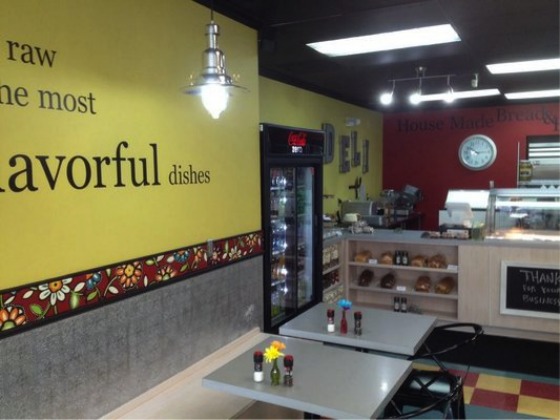 The tagline of Scratch Sandwich and Deli Co. is “Everything’s better from scratch.” And after a taste of their Red River Wheat bread, made from scratch, it’s hard to disagree. The deli and restaurant opened on Broadway in downtown Fargo in early August of this year. They boast homemade recipes for their soups, sandwiches, and baked goods, along with gourmet meats, cheeses and veggies. And, of course, there’s the bread–many varieties, some with famous namesakes (the infamous Red River), and all made from scratch.

The space is small but bright, with floral wallpaper and large windows overlooking the busy thoroughfare of Broadway. A single flower graces the top of each table. I visited the deli on a Saturday in the late afternoon, right before closing time, and it was bustling with patrons. I ordered from none other than the deli owner herself, the friendly and talkative Linda. My sandwich, an Italian Stallion on Red River Wheat, was served on a cookie sheet lined with decorative London-esque newspaper print. Sandwiches, salads, and chips alike are all served sans plate, straight on the cookie sheet. The prices are reasonable, about the same as what you’d pay at a sandwich chain such as Subway.

Unlike some sandwich chains, Scratch is not stingy on sandwich ingredients, loading their ‘wiches with a plentitude of meat and cheese. It was almost too much for my Red River Wheat to handle–the slices of bread were a bit too thin and began to crumble as I ate. But the flavors were so tasty that I didn’t mind calling a fork to my aid to finish the Italian Stallion. The kettle chips served on the side were a tantalizing mixture of sweet and salty, and I found myself licking my fingers, earning some wry looks from chic, urbane citydwellers passing by the window. Like many Broadway businesses, the street-facing windows are a splendid opportunity for people-watching and lend the room a more airy, spacious feel.

If you find yourself in downtown Fargo, hankering for some healthy homemade helpings, look no further than Scratch Deli.