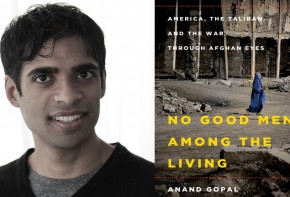 Anand Gopal shares the stories of three Afghans – a Taliban commander, a US-backed warlord, and a village housewife in his book No Good Men Among the Living: America, The Taliban and the War through Afghan Eyes. In his book, which was a finalist for the National Book Award, Gopal shares the stories of people who offer perspectives very different from the Western narrative regarding America’s War on Terror. Gopal spoke with the Concordian about why he decided to pursue this story, why he decided to tell the stories of these individuals and how he built trust with each of them, and how his understanding of the way the United States categorizes people has developed over time.

Concordian: What made you decide to tell a story about America’s war on terror through Afghan eyes?

AG: When I landed in Afghanistan, which was in 2008, I came with a set of preconceived notions of what the war was about, which are I would say the mainstream notions, that there are terrorists and there are good guys…I switched careers to become a journalist. I used to do physics and so when I landed in Afghanistan I actually had no journalism experience and I had no connection to any bureau or any institution, and so what that meant is I couldn’t afford a translator and I couldn’t afford a driver or anything else like that, and so I was forced very quickly to learn the language, and I got a motorcycle and ended up sort of going around the countryside…If I had gone the traditional route, if I had gone to a bureau I probably wouldn’t have met some of the people I ended up meeting. So I ended up going to the countryside and meeting Afghans, and what astonished me were the stories that they would tell about why the conflict took place and what the conflict was about [which] was so different from the prevailing narrative that we get back home. I eventually realized I need to take these stories down; I need to sort of translate them to people back home.

Concordian: How did you come to find these people and why did you decide that these were the people that you wanted to write their stories?

AG: Well I had in my mind the idea that I wanted to explore the way that we the United States categorizes people in the War on Terror. So I thought I would follow or try to find people who fit into the categories of the good guy, the bad guy and the in betweens, the civilians. So I ended up interviewing lots of people from those three groups…It was a combination of trying to get these categories and then find the people who would be willing to work with me journalistically over a course of time to allow me to tell their stories.

Concordian: One of the important themes is that category that we’ve set up allies, enemies and civilians. How did your perspective change from when you started reporting on this story to the end of writing this story?

AG: One major thing that I found that affected me deeply was that many of the people who were imprisoned or killed, especially in the early years in 2002 and 2003, were not people who were necessarily opposed to the US military presence and in fact some of them were America’s allies. There’s a story I wrote about in the book about a tribal elder from Kandahar who’s very influential. He’s one of the leaders of a tribe that has millions of people, and he was somebody who actually accepted the American presence, but due to bad intelligence this person was killed and as a consequence a lot of his constituents ended up turning against the American presence. That kind of understanding was something that I did not have going in. I assumed that you had the people who hated Americans from the get-go and they were just waiting for the opportunity to sort of reconstitute themselves, whereas it was much more complicated than that.

Concordian: How did you work to build trust with the people you were interviewing?

AG: Building trust is very hard, especially with a Taliban fighter. One thing I realized is I had to unlearn a lot of the things I had learned in newspaper reporting, which is you’re taught to go in and get the inverted pyramid, the who, what, where, when, why, etc. So I initially would just go in and try to suck up all the facts of the matter, whatever it may be, which is fine if you’re doing a spot news story or something, but if you’re trying to really get to know people…I found that wasn’t a good strategy. So because what I would do is I would go in and meet a Taliban commander and say, why are you fighting? They would just give me a very sort of standard propaganda answer, and I wasn’t going to get at something deep just by asking them that. At some point I realized I just have to stop this…I should not approach them as a reporter but approach them as a person and get to know them. I would ask them, tell me about your life growing up. Tell me about the first time you fell in love. Tell me about something that was memorable when you were a child. Things that everybody could relate to. And people would open up because people love to talk about themselves, right?…There’d be times where I‘d meet somebody four or five times and wouldn’t get to the [issues] that I was interested in until the fifth time. The first four times would just be hanging out and talking about whatever, and that built trust, which is I think the same way you build trust with anyone in your everyday life…

What: National Book Awards at Concordia

The event is free and open to the public.