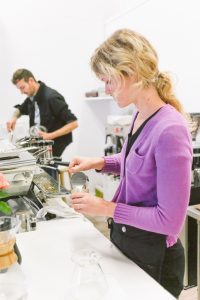 Vinyl of Rolling Stones plays, coffee machines whirr, conversations flutter. A family walks in, dad leading the way with an “I believe in Fargo” shirt as his wife and young daughter follow. Co-owner Tim Griffin stands in front of the iPad register, smiling as he gives the newcomers suggestions. He tilts his head back; a heart with an arrow tattoo peeks from behind his white shirt.

Other owner Elisha Griffin begins making the coffee. Her dirty-blonde hair falls and frames her face as she bends to grab ingredients from a lower shelf. Her golden wedding band shines against the white mug as she brings the coffee to the family.

This is Young Blood Coffee, the newest coffee shop in downtown Fargo.

Young Blood Coffee, located on NP Avenue and next to Wasabi, opened for business Sept. 14. Tim and Elisha opened the cafe to establish a different type of cafe community in the area, one without wifi.

“We started this because we wanted to create a place where we’d want to hang out and drink the coffee we’d like to have,” Elisha said. “We wanted to facilitate this space in Fargo where the people have the energy, the conversation to build upon this.”

They brew Four Barrel, a coffee roaster from San Francisco. Four Barrel is a light roast, a West Coast taste They picked Four Barrel because it is similar to Young Blood Coffee, and because of their strong connections to the company. Since the coffee is from the West Coast, locals have the opportunity to broaden their tastes.

“That’s why we weren’t afraid to start up a roastery here,” Elisha said. “There are a lot of local roasteries here, and so to have something out of state can bring a different perspective.”

Senior Marah Evans visited the coffee shop this weekend for the first time. Her first impressions of the coffee were nothing short of positive.

“I usually don’t drink caffeine, but I tried the iced chai latte and it was so good,” Evans said. 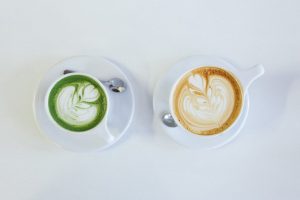 “We’ve had guys who are in their 60s and 70s come in here and they love it,” Tim added. “They’ve said that the coffee reminds them when they were in Europe.”

The name, Young Blood Coffee, came from Tim’s friend, Ian Johnson. Johnson started Young Blood Coffee a few years ago, a coffee roaster where he would do pop-ups. As his other career progressed, he found that he did not have the time to continue the business. Tim and Elisha loved the name, and the branding was in place, so they bought the brand from him.

While the name may seem to focus on the young crowd, Tim said they are not catering to a certain age demographic.

“We have no advertising budget,” Tim said. “We have found a lot of success in doing minimal advertising and letting the cafe being an expression of what the community makes out of them.”

Tim grew up in Cooperstown, N.D., whereas Elisha grew up in Oregon and California. They met at Four Barrel Coffee, a cafe in San Francisco, where they worked for four years there. Both have 15 years of experience with coffee, starting in their respective hometowns and expanding their knowledge through working with a variety of cafes.

Last fall, the couple moved to Fergus Falls, Minn., where Tim’s grandmother lives. Wanting to continue their passions, Elisha and Tim found Fergus Falls to be too small for their plan, so they decided to move up to Fargo.

“We had built the bar and the tables in chairs in our garage, having basically a cafe in our garage,” Elisha said. “We thought, ‘shoot, we need to go somewhere.’”

And they found that somewhere. Wasabi and Drunken Noodle had been utilizing a space as storage the past two years. The couple called the owner, Thamrong “Keng” Dechawuth, and he agreed to renting out the place to them as long as they cleaned it out. Two weeks later, Elisha and Tim were ready to open.

Everything is white, without clutter. Tim and Elisha’s goal was to have a clean and minimal space.

“I want the community to create the space,” Elisha said. “When everything is white, we pop out, the coffee pops out, what we’re doing stands out more. We don’t have wifi because we don’t want to make this a study hall, we want to make this an energetic, conversational space.” 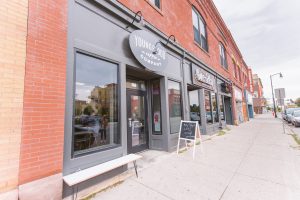 “It is aesthetically clean, so pleasing to be in such a bright area,” Evans said. “All the natural lighting is refreshing.”

For the future, they hope to have the ability to extend the hours, to close around 7 or 8 p.m. Elisha would like to hold cuppings and tastings as well as have educational classes on home brew and tea.

For now, the married couple will focus on exposing Northerners to Western coffee, brewing what has fueled their young adulthood to where they are today.

“Elisha and I still feel like we’re twenty years old, but we’re in our mid-thirties,” Tim said. “I think that’s why the name Young Blood resonates with us because we’ve never fully grown up, and I don’t think we ever will.”

Their young souls shone as Elisha held up a cup of coffee by her face with a goofy smile, Tim taking photos with his iPhone for a post on Instagram.