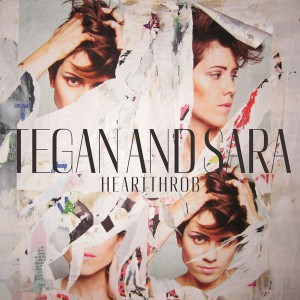 Tegan and Sara—the undisputed masters of lesbian indie love songs—are identical twins hailing from Alberta, Canada. They formed a band called “Sara and Tegan” in ‘95 while still in high school, and began touring extensively after they graduated in ‘98. They changed their name to “Tegan and Sara” not long before they caught their first big break in 2000—touring with Neil Young (who signed them to his label). Since then, the pair have gained notoriety both in the music scene and in the LGBT community. Their newest album, titled Heartthrob, is a little fun, a little sad, a little edgy, and a little cliché.

The songs come together in a progression from upbeat, happy-go-lucky, danceable tunes—“Closer,” for instance, is a tribute to the butterflies you feel in your stomach as you crawl closer to the girl of your dreams—toward a significantly toned-down ending (with some more interludes, of course). The lyrics, however, are a different story entirely. While the musical progression carries you through a developing narrative, there seems to be no natural lyrical progression from one song to the next. If anything, the lyrics seem to be a collection of worn-out love phrases.

That’s not to say that the album isn’t good. It is. But the lyrical novelty rests entirely on the fact that these are love songs written for and by women.

The question, then, is whether this kind of novelty is sufficient to make the album a work of art, rather than simply a jumble of clichés. In answering that question this reviewer is inclined to say that it is, but for a very particular reason: the empowering of stigmatized groups often tends to come from efforts by members of that group to humanize themselves in the eyes of larger society. Through telling their overwhelmingly normal stories of falling into and out of love, Tegan and Sara take small steps toward “de-othering” the LGBT community.

The album’s stronger tracks include “Closer,” “Goodbye, Goodbye,” “I Was a Fool” (quoted in the beginning), “Drove Me Wild,” and “I Couldn’t Be Your Friend.”

The punk band NoFX’s 2009 album “Coaster” includes a track titled “Creeping Out on Sara,” about Fat Mike’s encounter with Sara after a concert in Germany. The track was titled “Creeping out on Tegan” on the album vinyl, because Mike wasn’t sure which of the twins he had met. The track sparked controversy among Tegan and Sara’s fans, because they felt that the track was making fun of lesbianism (in spite of the NoFX’s commitment to supporting the LGBT community).

When asked about the song during an interview, Sara reportedly said “I am Sara, and I am creeped out.”

Tegan, on the other hand, tweeted about the song: “nofx + t/s = lots of email/texts/blogs/phone calls. i think punk in drublic is a great record. we r lesbians. sara was creeped. i AM cooler.”