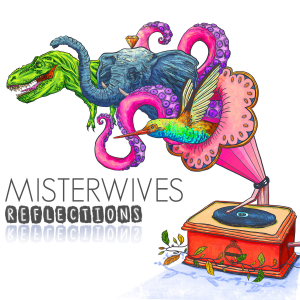 With their debut EP released on January 7, 2014, Misterwives has begun an Alternative Revolution with their very unique sound and use of electronics, guitar, and synthesisers. Each song has a similar tempo which may cause some listeners to think each one is the same, but the lyrics and power of the messages they portray create a different experience with each track. They also make a personal effort to try not to repeat any phrases or lyrics. This helps with the journey of each song; each listen isn’t a repetitive song that you listen to one time and sing along the next. The album requires attention, but also has an excellent groove that fosters side steps and dancing.

Three of their songs, Reflections, Kings and Queens, and Imagination Infatuation, are particular to the taste of those listeners that enjoy standing atop chairs, singing into hairbrush microphones, and constantly grooving. There is even a song for those more calm moments with Coffins. Granted, it is more dark, but the lyrics provide the experience. The songs are incredibly planned out and placed in order to make it a piece of music rather than just another band.

Raised in New York City, Misterwives is on their way to the top. With several tours and travel dates, they’re beginning to make a new fanbase, with myself included. They’ve been mentioned on several different websites such as Perezhilton.com, Buzzworthy.mtv.com, and Metrolyrics.com promoting their new “pop” sound. The link on Metrolyrics gives a good quick look into their original sound and beat.

I may be partial to this kind of music, but I would give this upcoming band 5 out of 5 stars because each song I will listen to several times without becoming bored. If there was anything negative to say about them, it would be that the singer’s voice would be too bright, but that is only for a listener’s opinion. I would describe Mandy Lee’s (the lead singer) voice as systematically and vocally engaged in the message of each song. They have a future and I’m sincerely waiting for their next album.