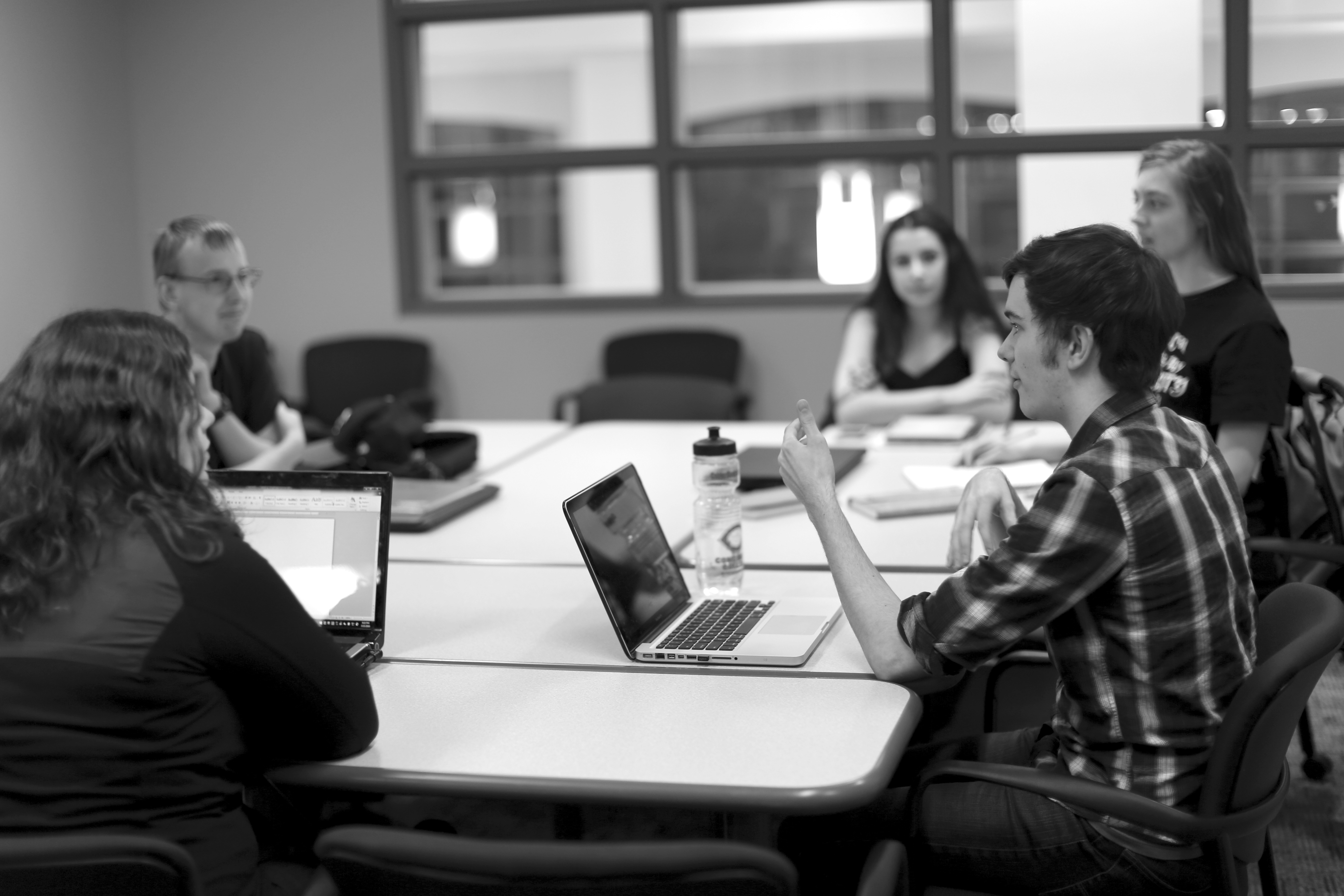 Cobber students bring their imagination and storytelling to life

Write about the person sitting to your right.

He wears glasses. The earpieces hide in short, sandy blond hair. He is a first-year student, but he knows what he wants to do after college: Logan Jorgenson dreams of being an author.

The above writing prompt is just one of many that the Cobber Creative Writing Club has used to help members become better writers and better friends. The club was founded last spring by Jaron Dahl and Colin Johnson but things really started to come together this past fall, said Johnson, current co-president.

“There definitely was a want for it. Right now in English classes the writing style they have is literary fiction, which is great, but a lot of students — especially freshman when they first come here — that’s not what they are really looking forward to writing,” Johnson said.

Literary fiction is a story that one has to create within a real world setting, according to current co-president Madison Lindquist. Even if the story is not true, it should read like something that could be. This genre is the one most used by writing classes here on campus.

Several members of the club, including Karis Baerenwald, prefer to write fantasy, a genre that allows for imaginary worlds with magic or other supernatural events. And the club offers a place to write fantasy or any other genre, and get feedback on the piece.

Jorgenson, Lindquist, Johnson and Baerenwald are four of the five to ten active members who come regularly to club meetings. Officially, the club has 36 members, ranging from first years to seniors, all of whom have a wide range of experience and ability.

Some members were more active during the summer when the club collaborated over email, Lindquist said. Others might be more active if the meeting times worked for everyone: a difficult feat for busy college students.

Despite this, though, the club has been able to build a community around the shared love of writing.

“Just getting to know the community better, and writing alongside people who are also writing is fun,” Lindquist said.

According to Lindquist, the club has two main forms of meetings: monthly critique meetings and weekly splinter groups. For critique meetings, members submit pieces that they have been working on — from poetry to short stories to chapters of novels — and the rest of the club reviews and edits them.

Then they workshop the pieces at the meeting itself.

For the past two critique meetings, Jorgenson has submitted the first two chapters of a fantasy novel he is working on. Currently, he is on chapter ten.

“It was going pretty well until I got to spring break and then I fell out of the habit. Now I need to get back into it,” Jorgenson said. “I usually try to write an hour each day, because, if you can get it into your schedule then it is not so tough.”

It is pretty complicated, Jorgenson says. He is not sure yet how the book will end. Despite this, Jorgenson has received positive and constructive feedback from the group.

“When I submitted the first chapter, one of the people I know from the club said that I had to submit the next chapter at the next meeting. And it’s the same for this meeting,” Jorgenson said. “This month we have another meeting and I will submit the third chapter then.”

It has been Baerenwald who has been strongly encouraging Jorgenson to submit more chapters.

“I told him I would come at him with my foam weapons if he didn’t send us his next chapters. And it has worked,” Baerenwald said with a smile. “Writers need deadlines … so I try to provide that for people in a fun, but also serious way.” Baerenwald knows that Jorgenson is passionate about his novel and wants to finish it,which is why she keeps pushing him to submit chapters. She would want someone to do the same for her,Baerenwald said.

For Jorgenson, the critique meetings have helped him grow as a writer and have shown him ways to improve his writing.

“It has definitely pointed out some big mistakes that I make [such as having] too many details. You don’t need to tell the reader everything that your character is doing, absolutely everything, because it just gets really bogged down and slow,” Jorgenson said.

According to Jorgenson, the critique meetings begin with the writer providing background to their piece. After that point,however,thewritercannotspeak as the rest of the group talks about the piece.

Once a given amount of time has passed, the writer can join the conversation. At that point, the other members give their opinions and revision suggestions, always being sure to begin with the things they like the most.

“We get closer with that group of people and, for me, I feel more comfortable when they critique my pieces. I don’t feel so defensive because I know them and I know that they are good writers,” Jorgenson said. “All that talent in the club where we get to read each other’s work and then we grow closer as a community.”

Johnson says that the round table setting of the critique meetings is pretty informal.

“The round table is sort of like the great equalizer, because when your work is getting critiqued by everyone else, they are going to find issues with it hopefully,” Johnson said.

Lindquist finds it easier to improve her writing when she is surrounded by writers.

“When we are critiquing, you kind of get rid of any seniority or titles or anything that you may have that gives you credibility as a writer, and you sit there as equals and determine where you can improve and revise your writing,” Lindquist said.

Originally, Johnson said, the club was only going to be the monthly critique and workshop meetings. But after the first few meetings, they realized that they were not going to build as strong of a community with meeting only once a month, and members wanted to have more community. That is why the weekly splinter groups were created.

Splinter groups meet once a week for two hours. The first hour is quiet time and soft conversation that allows members to write whatever they want. In the second hour, members focus on elements of craft writing. Sometimes that is genre or grammar, Johnson said.

Other times craft writing means interactive writing prompts like writing a group-effort story where a notebook is passed around and everyone takes turns writing. On the rare occasion, the club also will have a movie night where the movie is loosely connected to something they were focusing on.

A lot of it is just trying to foster creativity, Johnson said.

“Right now,” Johnson said, “it is a tricky balance between creating enough social time and then having enough free writing time where you are actually getting work done.”

The club seems to have found its balance, though, as everyone is learning more about writing and more about each other. It has provided members with a place to practice the craft of writing and receive feedback, according to Baerenwald

“I’m really glad that they made this club because, without it, I don’t think that a lot of us would be writing as much as we do,” Baerenwald said.

The club always welcomes new people, regardless of major or skill level. Cobber Creative Writing Club is a place where students can meet and work alongside people who are just as interested in writing as they are, Lindquist said.

“Before this semester, I didn’t even know half the people in that group and I think that just getting to know them and their writing style, and improving writing as a community is my favorite part.”