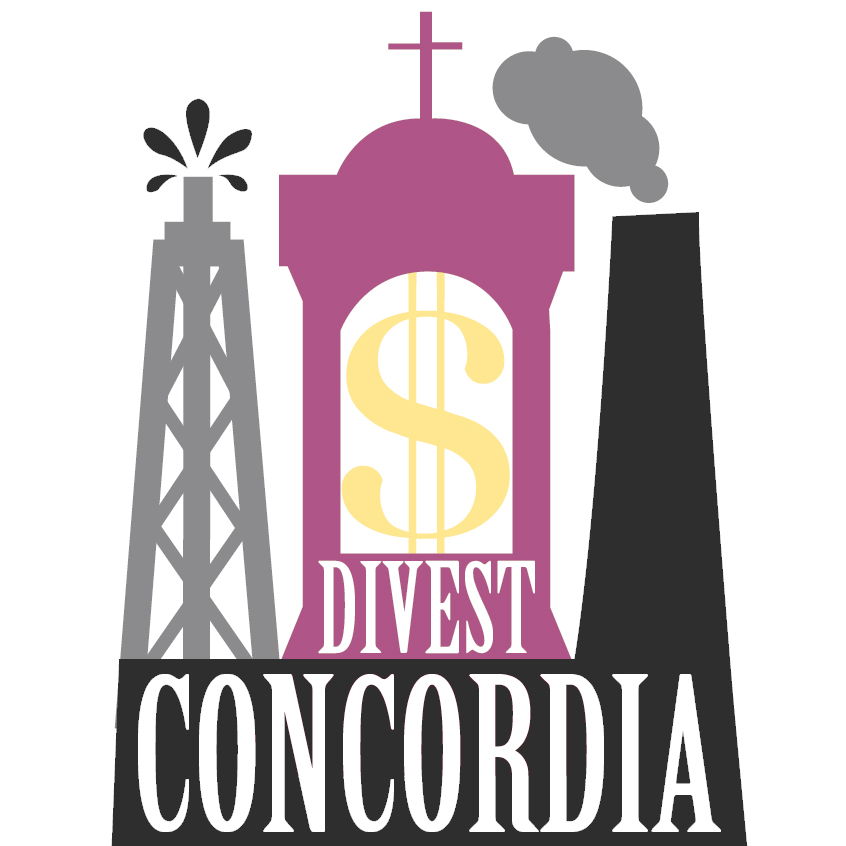 There has been a movement spreading through a number of colleges. It calls for social and sustainable responsibility, business ethics and change. This movement asks its institutions to rethink their investments and to partner with businesses that better match the institutions ideals and teachings. This movement has come to Concordia as “Divest Concordia.”

The divestment movement is one that has been moving across the country since 2012 according to Brett Drevlow, co-organizer of “Divest Concordia”. The movement was first initiated by different organizations such as Fossil Free and 350.org.

“We see different private colleges in Minnesota, I think over eight to nine colleges, that are actively engaged in a divestment campaign currently,” Drevlow said. “So we are talking about Carlton, University of Minnesota Morris, U of M Twin Cities, Luther. We just thought it’s a comparative thing [to bring the movement to Concordia].”

One of “Divest Concordia’s” biggest debate points is based on ethics and the colleges core ideal, BREW. According to Drevlow, a college with a growing sustainability department, a number of sustainability initiatives and teachings on business ethics should not invest in fossil fuel industries. And yet, Concordia is invested in a few.

“I think there is a large percentage of students on campus that believe we are practicing something different than what we are preaching,” Drevlow said. “We want everyone to know we are a sustainable campus. We have lots of sustainable initiatives in place, but we are gaining money from pollution, negative externalities and environmental degradation.”

“Divest Concordia’s” main concern is the principle of the college’s actions. “The whole thing is that as the fossil fuel industry gains money, so do we, and it just comes down to, is that ethical?” Drevlow said.

Drevlow said that about 80 percent of students would agree with what “Divest Concordia” stands for. 80 students filled out petitions handed out by one of twenty divest members Drevlow sent out with petitions. He just started distributing petitions two weeks ago and within the last three days, he predicts they have an excess of 200 signatures. A number that is most likely still growing.

“Divest Concordia” was launched by MPIRG (Minn. Public Interest Group), a student organization formerly known as Cobber for Common Interest. SEA (Student Environmental Alliance) is also the head of the organization. According to Drevlow, he and MPIRG’s co-president, Lacy Tooker-Kirkevold along with Andrew Christiansen and Eric Hacklestad, started researching Concordia’s investments in October of last year.

They looked over Concordia’s old 2013-2014 tax documents and set up a meeting with Concordia’s CFO, Linda Brown in November of last year. According to Drevlow, he gathered from the 2014 Concordia 990 tax document that the college endowment, growing from various investments, including some fossil fuel, sits in excess of 110 million.

“In that meeting we gathered enough information to conclude that divestment should be something that Concordia should seek,” Drevlow said.

They then worked to gather student interest in divestment and decided on a campaign strategy that would educate students, while trying not to ostracize the Concordia image.

“It is a touchy issue talking about the direction of over 100 million dollars, and some of the college’s donors are from fossil fuel industries.” Drevlow said. “A lot of people are scared about ticking off the wrong people. We took a long time to do the campaign strategy so we don’t upset the administration and misinform students.”

In the meeting, Drevlow said Brown informed them that the college uses a third party consultant to manage college investments, while also managing the portfolio. The company is Mercer Limited Liability Company.

“The college’s investments of endowment are in index funds spread among top companies around the world,” Drevlow said.

Some of those companies include fossil fuel companies.

“The recommendation that we have specifically in mind is not to divest 100 percent from them, but to divest from the top 200 fossil fuel companies in the world,” Drevlow said.

According to Brown, an endowment is gifts received from all sorts of people from various sectors of the economy, such as alumni and friends who have know the college for years. When that gift is given, there is an agreement between the donor and that organization.

“There is an agreement between donor and organization that this is how [donations] will be used,” Brown said. “We commingled that money for investment purposes, but the Board of Regents have a responsibility to steward that money to make sure it is spent in the way the donor intended.”

Individuals who make donations to the endowment can also say they want the money to be used for student’s studies, a program, income for a faculty member or various other aspects of the college. Brown said that in addition to upholding the donor’s wishes, the endowment is used to further the mission of the college.

“The organization uses the interest in support of its mission,” Brown said. “When I look at the Concordia endowment fund, 60 percent of it is for scholarships.”

Other basic responsibilities of Brown and the board of regents is to build the endowment large enough to keep up with inflation and avoid losing purchasing power.

In order to hit these basic objectives and responsibilities, Brown said that her, the board of regents and investment committee have to use a diversity of investments to build the endowment, including investing in fossil fuel industries.

“How do you maximize returns without undue risk?” Brown said. “By and large you are trying to achieve objective by having a diverse portfolio of assets. If an organization chooses to have some sort of filter on their investments then the analysis is what risk do you run not achieving your objectives and then not being found irresponsible as a board member.”

Without careful management of the Concordia endowment, tuition would be higher. According to Brown, the current year endowment provides 6.8 percent of Concordia’s operating budget, which is about 70 million dollars.

“For a college our size, we would like more,” Brown said. “Your endowment fund is a whole lot more than a rainy day fund and it’s not an unusual part for it to be paying for scholarships. On a per-student basis, we are just over fifty thousand dollars per student. We would like to be at about forty million dollars more than we have now, which is fifty-four, fifty-five thousand dollars per student.”

Brown wonders if Concordia did add a filter to their investments for social reasons, would they be taking more risks in their financial portfolio, because they eliminated a large sector that is important to the economy?

“Investing in stock that is tied to sustainable energy and technology isn’t relevant yet, but it will be once we know [renewable energy] is implemented on a mass scale and it’s the primary source for fueling vehicles and heating houses,” Lane said.

Ethically, according to Lane, investing in a company does not affect the success or failure of that company and does not mean that Concordia supports unsustainable practices.

When a company issues stock, they do it through an investment bank which says what the company is worth. The stocks are then sold to some external investors, some people related to the company and eventually, some to the public.

Investing in the stocks only reflects how people expect things to change in how the industry will play out. If the company succeeds, then yes, investors will see a rise in their stocks as they would see them decrease as the company fails. However, the business people invest in receives no additional benefits.

“People are trading rights to future profits of the company,” Lan said. “If people sold off their shares, if all universities decided divestment was a good idea, then essentially you would see individual investors buying up the stocks, [but], the future returns and value of the company will never change.”

Brown agrees with Lane that investing in fossil fuel companies is not unethical. She thinks when investing in a company, one should know more than just the particular field or area the company is in to determine ethics.

“How do they take care of their people, how do they invest?” Brown said. “I am hesitant to call a company unethical just based on what they do. That is not to say that there aren’t unethical companies in every business you do.”

Brown said they just have to hold the organizations they choose to work with at higher standards.

“As long as people will drive cars and heat homes and fly airplanes, we will need sources of fuel,” Brown said. “So what is the most responsible way? It is to ensure the companies that are providing those sources of fuel are insisting on delivering and or doing their work in as a sustainable and ethical way possible. I don’t think you get there by divesting.”