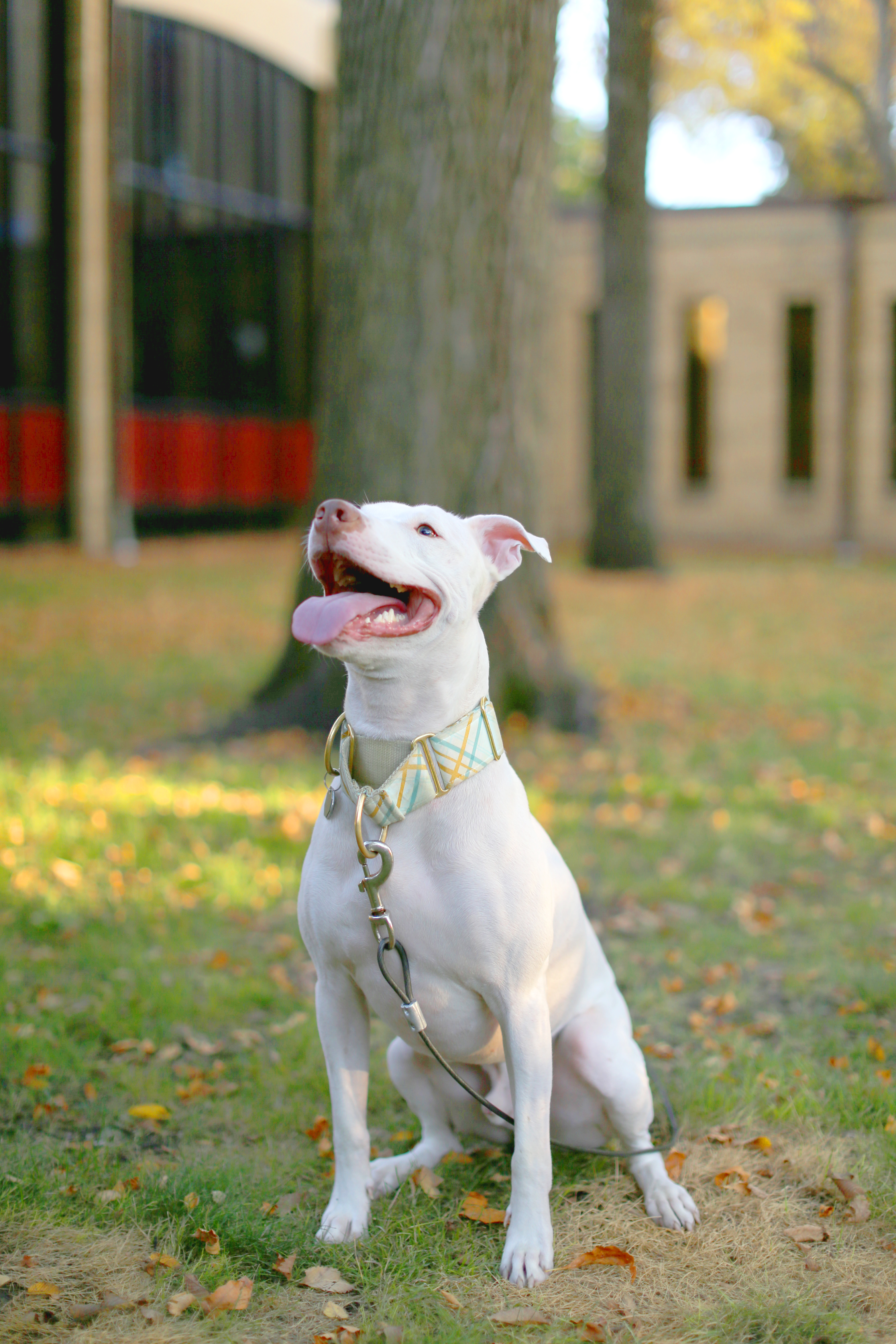 A white dog on a leash walks around campus. He sniffs at the fallen leaves and greets students with a doggy smile as they come up and pet him. Some students are lucky enough to get a slobbery kiss.

Michelle McNamara, the hall director for Brown Hall, has had Ice, a pitbull mix, since July of last year. He started as a foster dog. McNamara is the foster coordinator for “4 Luv of Dog Rescue,” but she later adopted Ice in December.

“The intention was to find him a good home that was right for him, and I think we found that. Ice has some special needs: he’s deaf,” McNamara said. “But we just fell in love with him. He loves people. He loves that we live on a college campus, I think, because he gets to meet a lot of the students and the students seem to really like him, too.”

The pet policy for hall directors is a bit different than the policy for the general student body. Students can only have fish, or in certain cases, other fully aquatic animals, in ten-gallon tanks or smaller, according to Mikal Kenfield, director of residence life.

The fish-only policy, Kenfield said, has been in place a long time. It was in place when she was a student in 1999, and was created before then.

“Fish are a good option because if the fish gets out, no worries. Fish have to live in their tank. There aren’t allergy issues. There aren’t, typically, odor issues with tanks. It is the pet that can have the least negative impact on the community as a whole,” Kenfield said.

Furthermore, hall directors have full apartments. This is part of why their pet policy differs from that of the general student policy. Hall directors can have one dog or one cat or two caged animals, such as a rabbit or a gerbil.

When adopting or purchasing a pet, hall directors still have to meet with Kenfield to make sure that the animals are a good fit for them. The animal’s well being is a key factor to every decision.

Beyond meeting the pet policy, hall directors have to sign a pet agreement and make a deposit for any damages that the animal may cause to the living spaces, which also goes toward cleaning the apartment afterwards.

“There is a lot of logistical work, but I do think it is a benefit for them, and we are willing to go the extra mile to make sure that they’re happy and that this place where they live all the time is their home,” Kenfield said.

Having hall directors with pets can benefit students as well. For Megan Han, RA in Brown Hall, having weekly RA meetings at Michelle’s apartment has improved since she and the other RAs get to interact with Ice.

“He’s pretty cute. It’s kind of nice that we have our meetings there because it helps us to destress by having an animal around,” Han said. “Michelle fosters dogs [too] and so my favorite was a few weeks ago when she had this itty-bitty puppy that just turned two months old. Her name was Cindy, and she was the cutest, saddest looking puppy ever.”

Several other hall directors have pets as well, according to Kenfield. Nicholas Murray, Hoyum hall director, has a cat, and Jon Mergens, Livedalen hall director, fosters dogs. For McNamara, having a dog allows her to meet a lot more students and to connect with them in different ways.

However, McNamara says, having a dog or any pet can take a lot more energy than some people realize, especially if, in the case of students, they are coming from homes where they are not the sole caretaker of the pet.

“If you’re not the one doing all of it, and you’re not the one picking up the bill when they go to the vet, sometimes that stuff can get overlooked,” McNamara said. “That is, in my opinion, a good reason why sometimes we don’t want just anybody to be able to have a pet on campus because we want to make sure it is the best thing for the animal to be in that situation, and for the student, too.”

Logistically, not every student on campus could have a dog, cat or any other pet, besides fish. Han said that would simply be too much for residence halls, from the noise level to the smell level, to the effect it would have on students with allergies. This is why having policies that allow only hall directors to have pets is a good thing.

“If you go and talk to Michelle or any hall director, you might get the chance to see their dog or cat, which might be beneficial,” Han said. “There are studies showing that petting an animal can help lower your stress or just make you laugh if they do something silly.”

This entails the proper information from medical professionals. Then, once demonstrated need is established, the student will work with residence life, specifically Laura Zeiher, the assistant director, to figure out a space that can accommodate the student’s needs.

“So we really think about the animal and about where the animal can be safe and happy,” Kenfield said. “We also want to take into consideration the roommates rights of being able to live there and the other floormates.”

As for the general student policy, Kenfield said that residence life gets more and more questions every year from students who want to have pets on campus. Many students and staff recognize the value and benefits that pets have to living environments.

There is also a trend in higher education of thinking about ways to be able to incorporate more pets on campus, according to Kenfield. But the benefits of pets must be weighed against the challenges that arise, whether with facilities or with the rights of other students. If changes to the policy were to be made, Kenfield said, they would have to be student driven. That way Kenfield knows that any and all changes are something students want.

“I’m never really interested in pursuing things unless I know that students actually care about it, so I guess that is a challenge back to the students,” Kenfield said. “If you want change, rally the troops and call for it. Show why, show how.”

Either way, students can still expect to see Ice walking around campus with McNamara. Or they can visit him in Brown, where they can see his happy doggy smile.