By: Hayden Karr
In: College, Featured, Sports, Winter
With: 0 Comments 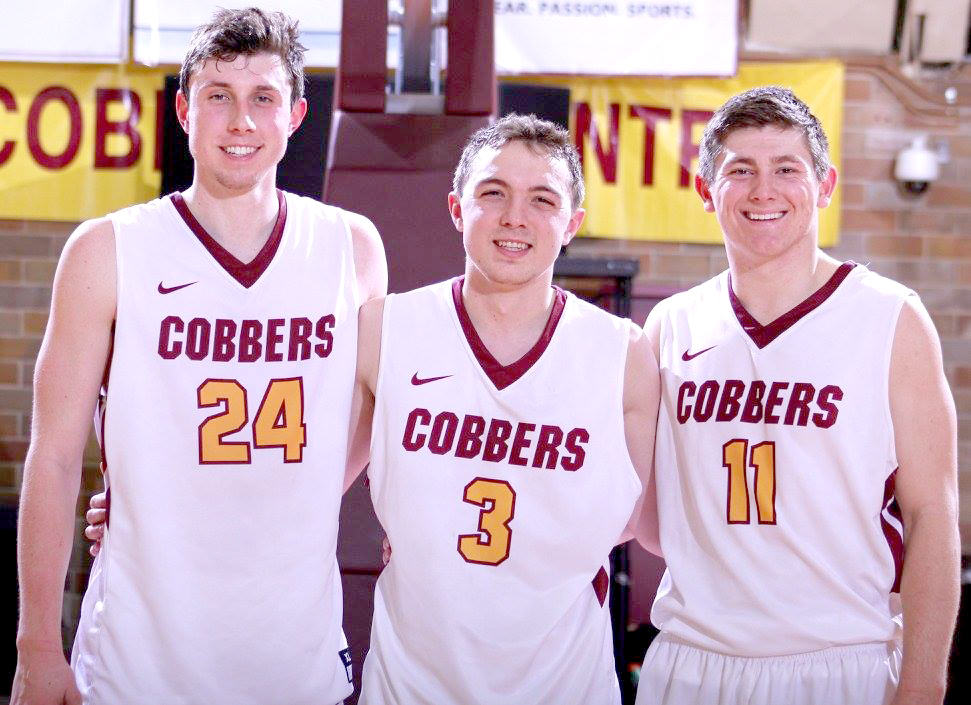 As the season winds down, the Cobber men’s basketball team continues to compete aggressively, with three seniors leading the team.

The Cobber men’s basketball team has a record of 9-9 in conference play, 12-11 overall. They are currently sixth in the MIAC standings. They have two games left in the season and are racing toward the MIAC playoffs. If the Cobbers can hold onto sixth place, this will be the third time in the last four years that the Cobber basketball team has made the playoffs.

The Cobbers are a relatively young team after losing eight seniors from last year, one of which was an All-American. This year, there are only three seniors on the team: Dylan Alderman, Zach Kinny and Austin Nelson. All three seniors lead the team as starters. Alderman and Nelson are tied in leading the team in points with 14 points per game, while Kinny adds 10 ppg and 5.7 assists per game.

Senior leadership has carried the team so far this season. Coming into the season, the Cobbers were projected to be ninth in the conference. They are now respectively fifth. The three seniors have put it on themselves to keep the team headed toward the playoffs.

“One thing that we have really focused on is going 100 percent at all times,” Kinny said. “I think we have set an example for everybody.”

The seniors showed out in their last game against Macalester. All three had double digits in the scoring column. Grant Hemmingsen, the soon to be head coach of the men’s basketball team, is enthused and proud about how well these seniors have performed and what they have brought to the team.

“Between Dylan Alderman, Austin Nelson [and] Zach Kinny, our three seniors have bared the weight of this whole season and each of them is playing well individually,” Hemmingsen said.

Leading the seniors in scoring in the game against Macalester was Nelson with 20 points, six rebounds and three assists to close out the 85-72 win. Nelson also scored at least 20 points in the two games prior to Macalester. He said that he is humbled and excited about his recent triumph and relates much of his success back to his teammates and coaches.

“A lot of credit for my play goes to my teammates,” Nelson said. “I make shots because they’re able to get me open shots . . . it’s not me, it’s them.”

Hemmingsen reiterates that Nelson is an important piece of the team as well as an all-round team player. He praises Nelson’s ability to stretch the floor and create mismatches by being able to shoot from the outside and score in the key. Shooting 40 percent from the three-point line coupled with his 45 percent overall shooting percentage. He is a constant threat both on the perimeter and inside the paint.

“When he scores, we’re better,” Hemmingsen said. “He brings a lot of attributes to our team because he can stretch the floor. He’s a big part of our puzzle for . . . success.”

The team is overall optimistic heading into their last four games of the season and hopefully into the MIAC playoff bracket. They are focused and hitting stride at the right time.

“I’m pretty proud of what we’ve accomplished and with how far we’ve come and I think we’re ready to make a playoff push,” Nelson said.

“I believe that we are hitting our stride into our best basketball now,” Kinny said. “We have the ability to beat any team if we are playing well.”

The next four games could decide the Cobbers fate for their play-off run. If the team wins in the first round, it will be the first playoff win in the seniors’ careers. The Cobbers have not won a MIAC title since the 1982 season, and this question on their minds is, could this be their year?

2017-02-16
Previous Post: ‘This is my town, I belong here’
Next Post: Summary on World Interfaith Harmony week speakers