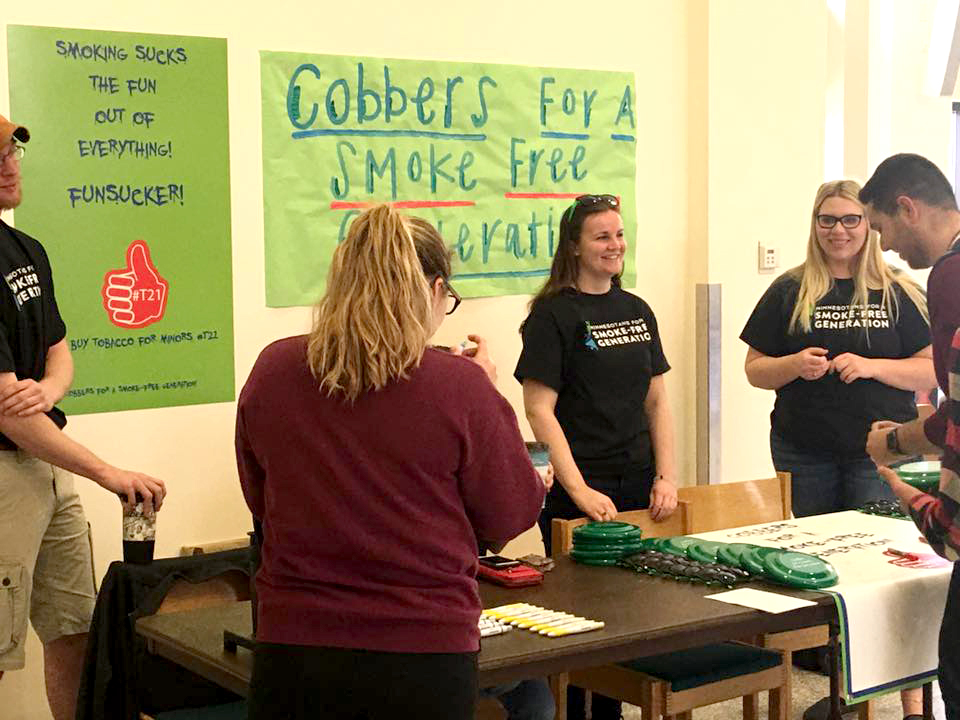 Tobacco 21, a project started in Dr. Cindy Larson-Casselton’s senior capstone Health Communication class, focused on spreading a petition to start a bill in Minnesota that would raise the legal age of purchasing tobacco products to 21. The goal of this bill would be to stop teenagers from getting addicted to tobacco, thereby slowing the rate of tobacco addiction in Minnesota.

T21 believes that by making tobacco less accessible for high schoolers, addiction rates in young people will plummet, thereby starting a new generation of people largely not addicted to nicotine. But why is the current legal age of buying tobacco (18) not high enough? Many teenagers manage to get access to tobacco despite not yet being 18 years old.

Jason McCoy, the tobacco prevention coordinator in Clay County, explained that because 18-year-olds lie in a kind of limbo stage between high schooler and adult, their social circles often still include high schoolers who are under 18. This gives younger students the ability to simply ask their older friends to buy tobacco for them, no fake I.D. necessary. If young adults were unable to walk into a store and buy cigarettes until the age of 21, an age by which most people are no longer involved in teenage social circles, teenagers would find it much more difficult to get tobacco.

According to tobacco21.org, 220 cities and counties across the U.S. have raised their legal age of purchasing tobacco to 21, from Hawaii to New York City. One city in Massachusetts found that after raising the legal age to 21, tobacco use in high school students fell by nearly half. Despite the amount of people on board with Tobacco 21, no universities or colleges have yet signed on with Minnesotans for a Smoke-Free Generation. McCoy says it’s crucial for institutions of higher education to get on board with T21 for it to succeed.

Tricia Tauer, one of five seniors who participated in T21 on Concordia’s campus, described the process of getting involved with it.

“We wanted to learn how to push an effective healthcare campaign because of all the tension surrounding healthcare right now,” Tauer said.

Tauer and her teammates joined forces with Partnership 4 Health, a group of community and public health workers in Clay County and other surrounding counties. According to their website, Partnership 4 Health works to “prevent chronic disease through sustainable changes.” These changes include reducing tobacco use and exposure. They also collaborated with Minnesotans for a Smoke Free Generation, which focuses on reducing youth smoking in Minnesota as a whole.

Jason McCoy is one of many public health officials involved in Partnership 4 Health who are advocating to push Tobacco 21 to the county or even state level. Last year, he and other health officials were able to update Moorhead’s tobacco ordinance to make it impossible to sell a cigar for under 1 dollar. However, he has higher hopes for the future of Minnesota’s tobacco laws.

High school-aged youth are prime customers for tobacco companies. If they can get young people addicted before they reach a certain period of development, they’ll have lifelong consumers. Tauer, McCoy and all of T21 want to eliminate access to tobacco from high schoolers entirely.

“Nonsmokers don’t really think about the implications surrounding tobacco,” McCoy said. “Anything we can do to stop someone from even starting is huge.”

McCoy said that because of Concordia’s renowned focus on social responsibility, there’s a good chance of T21 making an impact on campus and in Moorhead.

On March 31, Larson’s team of students and representatives from Partnership 4 Health staffed a table in Knutson Campus Center to collect signatures for their petition. Tauer described the event as a great success.

“It was great to engage in important conversations with students about their ideas,” Tauer said. She and her teammates got the opportunity to discuss T21 with smokers and nonsmokers alike, as well as Concordia’s own Anne Craft, President Craft’s wife, and Bruce Viewig, Associate Vice President and Chief Information Officer.

President Craft also offered statements of support and praise for T21: he said that he’s impressed that Concordia students are so willing to invest themselves in the health and wellbeing of younger people. Although he said that if a T21 bill were presented to Minnesota legislators he would like to read it before expressing support for it (for the sake of thoroughness), he is “in favor of the efforts of our students.” He finished his statement by saying, “those of us who are older have an obligation to help young people make good decisions.”

McCoy and other public health officials in Minnesota are continuing their push for stricter tobacco laws. The next step for McCoy is to build a local coalition that would bring T21 legislation directly to Clay County. Although this goal is far in the future, he’s positive that what has been accomplished in the present is enough to propel T21 very far.

In the immediate future, T21 will continue to be active in Minnesota in the hopes of creating a new culture in which smoking is no longer a norm.